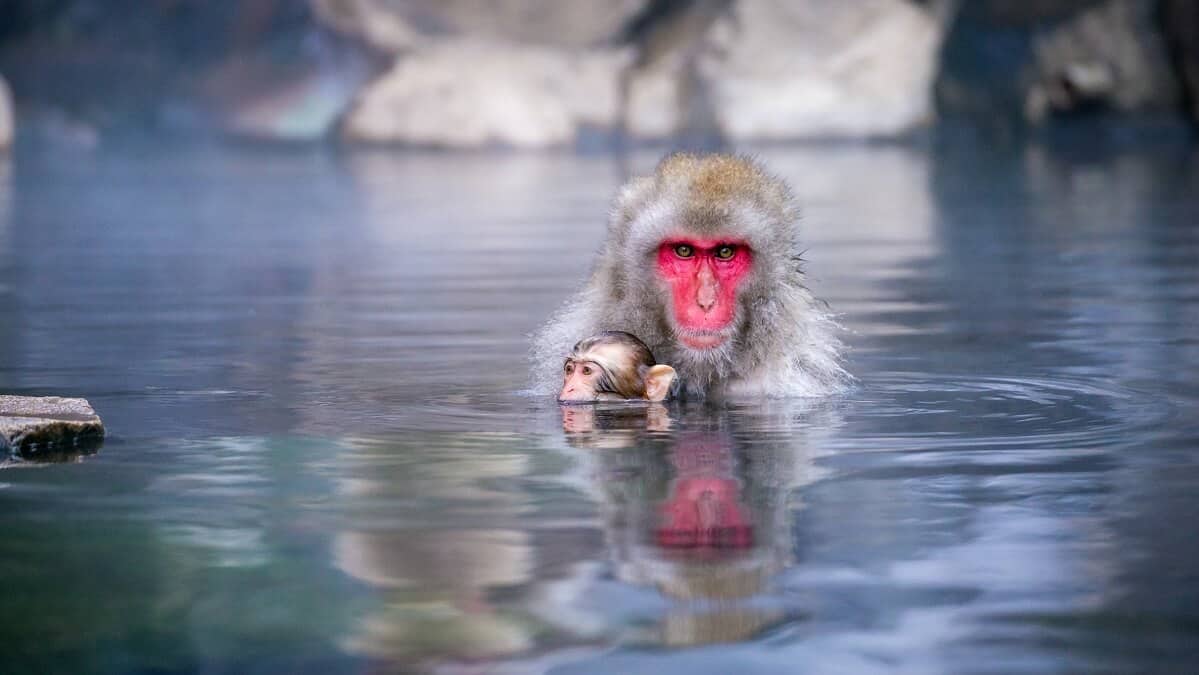 Snow monkeys fishing in the winter

Most monkeys are found in warm climates, but Japanese macaques are an adaptable species, inhabiting the coldest places in the world for non-human primates: the high-altitude area of Kamikochi and Shiga Kogen in Japan.

Now, researchers have discovered how these monkeys survive the harsh winters, when temperatures can get down to -20°C. Analysing the monkeys’ faeces revealed DNA fragments of fish, aquatic insects, crustaceans and molluscs.

“In the book Zoku: Kari no Kataribe by Yoshio Matsuyama published in 1977 there are observations made by the people of Ina Valley where a group of monkeys carry stones to divert the flow of the river in order to catch aquatic insects and fish,” says co-author Koji Tojo, from Japan’s Shinshu University. “Our study began with the desire to research these stories scientifically.”

Published in Scientific Reports, their study definitely demonstrates that the monkeys rely on the rivers as a source of nutrients, especially in the coldest season. It’s also the first time fishing behaviour has been observed in monkeys.

“Population density is exceptionally high and macaques must overwinter in an extremely harsh environment,” explains lead author Alexander Milner, of the University of Birmingham, UK. “These larger populations create additional stress for surviving winter, but an abundance of groundwater upwellings and hot spring inputs from active volcanoes ensures many streams flow without ice cover allowing easy access to the monkeys.”

NASA’s TESS mission has spotted an exoplanet, zipping around its parent star at a blistering pace – completing an orbit in just eight Earth hours.

This ultra-short period planet, dubbed GJ 367 b, is also one of the lightest exoplanets we know, with half the mass of Earth.

“We’re finding a Mars-sized planet that has the composition of Mercury,” says Roland Vanderspek, principal research scientist at MIT and co-author of the study in Science. “It’s among the smallest planets detected to date, and it’s spinning around an M dwarf on a very tight orbit.”

The research team was able to pin down specific properties – such as the fact that GJ 367 b is likely a hot and rocky world, with a solid core of nickel and iron.

But there are a lot of questions yet to answer.

“Understanding how these planets get so close to their host stars is a bit of a detective story,” says TESS team member Natalia Guerrero. “Why is this planet missing its outer atmosphere? How did it move close in? Was this process peaceful or violent? Hopefully this system will give us a little more insight.”

New research shows that killer whales are spending more time than previously recorded in the Arctic, as melting sea ice opens up more and more areas to these apex predators.

“Although there is high spatial and interannual variability, the September Arctic sea ice minimum is declining at an average rate of 13% per decade, when compared to values from 1981 to 2010,” says lead researcher Brynn Kimber from the University of Washington, US.

“Killer whales are being observed in the Chukchi Sea (in the Arctic Ocean) in months that were historically ice covered and more consistently throughout the summer.”

Kimber and team used acoustic tools to monitor killer whale movement. These highly intelligent and adaptable species often travel to different areas to access prey, and the team found that they are spending more time in the Arctic Ocean than ever before, even though they risk being entrapped by the ice.

“It’s not necessarily that killer whales haven’t been reported in these areas before, but that they appear to be remaining in the area for longer periods of time,” says Kimber. “This is likely in response to a longer open-water season.”

Not only does a reduction in sea ice mean that killer whales can get spend more time in new areas, but it also may mean that other species – like the bowhead whale – can’t use the ice to avoid predators.

The results were presented at the Acoustical Society of America conference.

The dinosaur skeletons belong to the species Tethyshadros insularis. Not only are they the largest and most complete specimens ever found in the country, but they also rewrite our understanding of the evolutionary history of the modern-day Mediterranean.

Geologists originally thought that this site – discovered in the 1990s – was first part of an island in the middle of an ancient ocean, and was therefore home to dwarf species that became miniaturised in response to limited resources. But these bigger specimens suggest this was an incorrect assumption.

The research, published in Scientific Reports, also dates the site and its fossils to 80 million years ago, 10 million years older than previously thought.

When thinking of intelligent birds, a parrot or a crow might come to mind. But seabirds like gulls have complex problem-solving abilities too, according to Canadian researchers.

In a study published in the journal Royal Society Open Science, researchers tested four wild populations of ring-billed gulls, native to North America. Nesting birds were tasked with a puzzle involving a food reward (a piece of sausage – not a chip, as you might assume). The birds had to pull a string to draw the food from a box.

A quarter of the birds solved the puzzle after three tries, and a fifth got it on the first try.

“String-pulling is among the most widespread cognitive tasks used to test problem-solving skills in mammals and birds,” explain the researchers, led by Jessika Lamarre at the Memorial University of Newfoundland, Canada. “Although at least 90 avian species have been administered the string-pull test, all but five of them were perching birds (passeriformes) or parrots (psittaciformes).”

Ring-billed gulls are now the first waterbirds to solve this string-pull test.

“Since innovation rate and problem-solving are associated with species’ ability to endure environmental alterations, we suggest that testing the problem-solving skills of other species facing environmental challenges will inform us of their vulnerability in a rapidly changing world,” the researchers conclude.