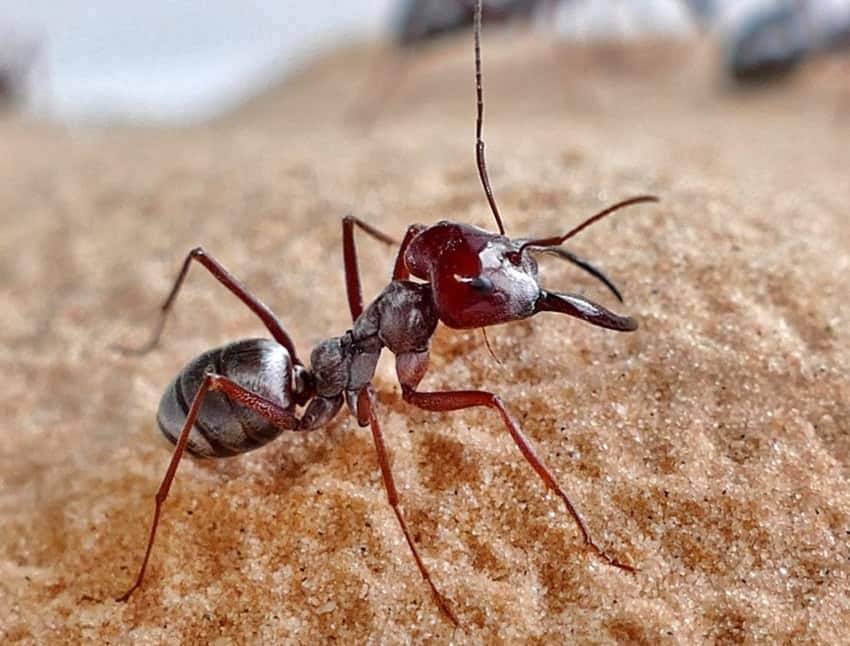 The diurnal silver ant, Cataglyphis bombycina, has made impressive adaptations to the extreme temperatures of midday Saharan sands to feast on less resilient prey while other predators have retreated to shady refuges.

The hardy desert dwellers, which can reach blistering speeds on 60 degree Celcius sands in their quest for lunch, had long fascinated Harald Wolf from Ulm University in Germany.

“Even among desert ants, the silver ants are special,” he says.

The insects have evolved several adaptive features typical of the Cataglyphis genus, including an intermittent ventilation cycle to limit respiratory water loss, synthesis of proteins that help them reach critical maximum body temperatures and honed navigation skills to escape the heat quickly.

They have also developed morphological features to survive the harsh desert environment, including triangular-shaped hairs – giving them their silvery appearance – to help regulate body heat.

Wolf and colleagues were curious to know why, despite having legs almost 20% shorter than their sister species, Cataglyphis fortis from salt pan habitats, the Saharan ants were able to move faster over their hot, granular sand dunes.

They discovered, as reported in the Journal of Experimental Biology, that C. bombycina reach world record speeds of 855 millimetres per second – 108 times their body length compared to 50 body lengths achieved by C. fortis.

This approaches the speed of top record-breaking creatures: Australian tiger beetles and California coastal mites with relative speeds up to 171 and 377 body lengths per second, respectively.

How did they do this?

Finding out, says lead author Sarah Pfeffer, wasn’t easy. “We had to look for digging ants or follow a foraging ant back home,” she explains.

But once the team located a nest, they simply connected an aluminium channel to the entrance and lured the ants out with mealworms. “After the ants have found the food,” says Pfeffer, “they shuttle back and forth in the channel and we mounted our camera to film them from the top.”

The team also observed C. fordis in Tunisia for comparison.

Close analysis of the silver ants’ movements revealed they were swinging their 4.3 to 6.8 millimetre long legs at speeds of up to 1,300 millimetres per second, taking up to 47 strides per second – about a third faster than their larger cousins.

Also incredible was their stride length, which quadrupled from 4.7 to 20.8 millimetres as the ants sped up, during which time they switched to a gallop with all six feet off the ground at once.

Yet it is very graceful, with a “very smooth transition between the alternating leg movements with a straight body axis throughout their run,” says Pfeffer.

The ants displayed near-perfect synchrony in their footwork, coordinating the movements of each pair of three legs – working together to form tripods – which only touched the ground for as little as 7 milliseconds before initiating the next stride.

The researchers speculate that the distinctly different locomotive behaviours of the two closely related desert ants is related to their different ground surfaces – hard-baked clay in the salt pans habitat of C. fortis as opposed to the sand dunes of C. bombycina.

First, they write, it’s likely that the Saharan silver ant’s coordinated movement pattern “results in brief, synchronous and forceful impacts of three legs on the sand substrate,” which could prevent them from sinking into the hot sand.

Pfeffer says she is intrigued by the muscle physiology and biomechanics the ants use to reach these high walking speeds, “which must require muscle contraction speeds close to physiological limits known so far”.

“These special features highlight the evolutionary malleability of desert ants as a group,” she adds, “and of animals more generally.

Footage of a Saharan silver ant (Cataglyphis bombycina) running, at 44x and 300x slow motion, highlighting when the legs are in contact with the ground and when they are swinging. Credit: Sarah Pfeffer and Harald Wolf