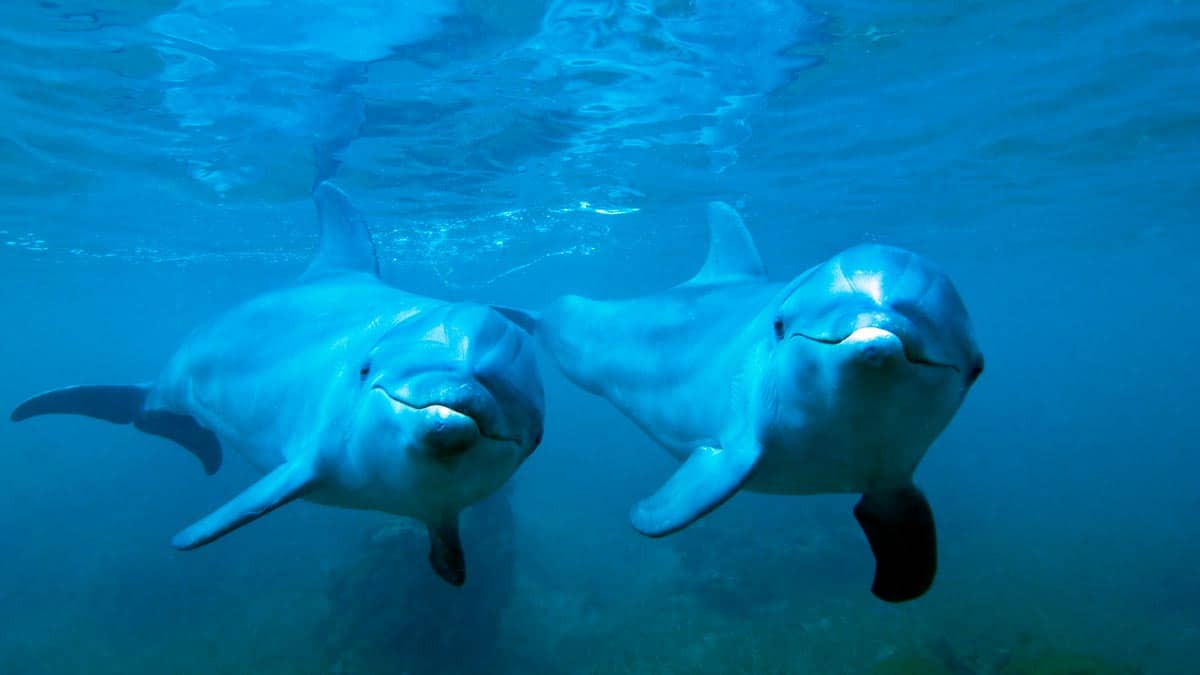 Humans aren't the only species to have sex purely for pleasure. Credit: Mike Hill / Getty.
More on:
sex

It was long thought – perhaps naively – that humans were the only animal to take pleasure in sex.

This fusty attitude can probably be attributed at least in part to the dry, evolutionary explanations science has generally mapped onto sex, which is actually a complex social as well as biological behaviour.

Now we know of numerous examples of the animal world seeking pleasure too, from rats that enjoy being tickled through to bonobos that mate for pleasure in same-sex couples.

And these sexual escapades extend to the watery depths. According to a new study in the journal Current Biology, female dolphins also take great pleasure in sex, with a fully functional clitoris that works much like a human’s does.

“Just like the human clitoris, the dolphin clitoris has large areas of erectile tissue that fill up with blood,” says Patricia Brennan, lead author and an assistant professor of biological sciences at Mount Holyoke College, Massachusetts, US.

The team analysed the genitalia of 11 female dolphins that had recently died of natural causes; looking at the shape and configuration they found an extraordinarily sensitive organ, with thin skin and shallow nerve endings, as well as genital corpuscles like those found in the genitalia of humans, and which mediate the sexual response. Moreover, the shape of this erectile tissue changes as the animals reach adulthood and sexual maturity.

Brennan says she was stunned to find so many acute similarities between the seat of pleasure in human and dolphin genitalia.

“Since the entire pelvis of dolphins is so different to humans, it was surprising to see how similar the shapes were,” she says. “Also, the size of the nerves in the clitoris body was very surprising. Some were larger than half a millimetre in diameter.”

But while the similarities between human and dolphin genitalia may be surprising, the fact that they take pleasure in sex makes sense when you look at how these highly social cetaceans behave.

For one, dolphins have sex year-round to forge and sustain social bonds, rather than during particular mating seasons. There have also been anecdotal reports of female dolphins rubbing each other’s clitorises with snouts, flippers and flukes, suggesting the presence of homosexuality – a trait that’s found right across the animal kingdom.

Brennan says female pleasure has been broadly neglected in scientific literature, leading to a patchy understanding of sexual behaviours in the natural world. The human clitoris wasn’t even fully described until the 1990s, and it wasn’t until 2005 that urologist Helen O’Connell demonstrated the clitoris’ extraordinary subcutaneous depth.

“This neglect in the study of female sexuality has left us with an incomplete picture of the true nature of sexual behaviours,” Brennan says. “Studying and understanding sexual behaviours in nature is a fundamental part of understanding the animal experience and may even have important medical applications in the future.”

Originally published by Cosmos as Female dolphins like to get frisky