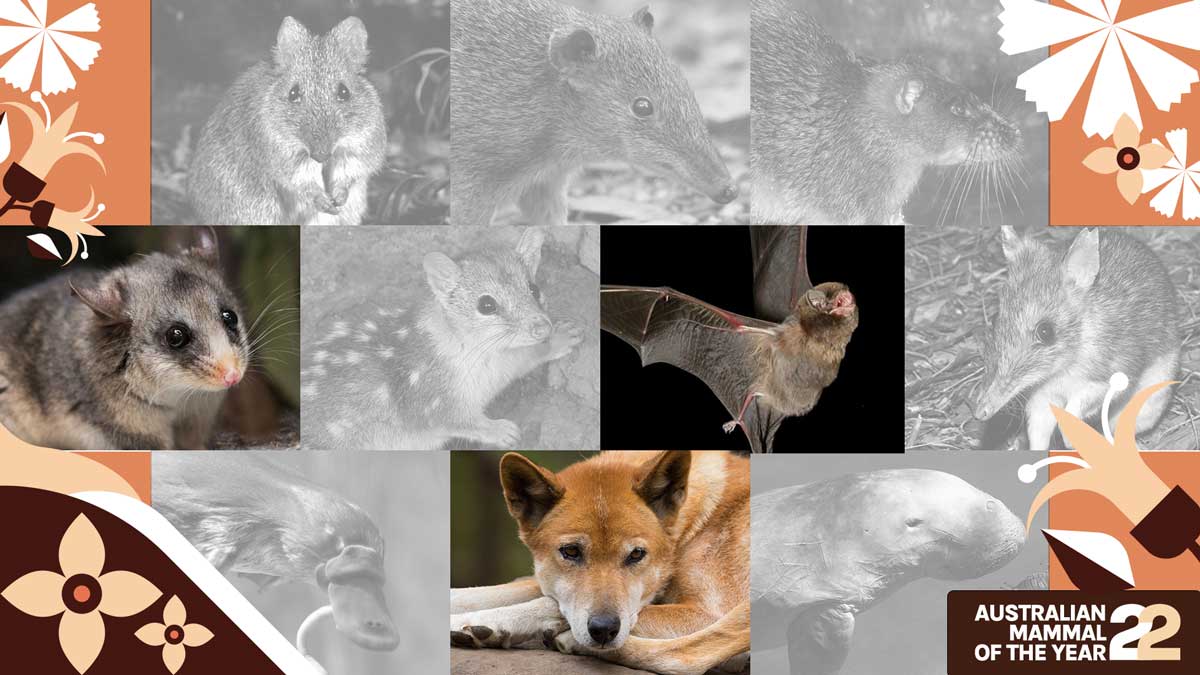 Oh no! Not even one of Australia’s only freshwater aquatic mammals, the rakali, is safe from being booted out of the running for Australian Mammal of the Year. The rakali is an adaptable hunter that holds culinary masterclasses for its young, but it won’t be receiving any Michelin stars today after losing out by over 160 votes!

Now you’ve got just 22 hours to vote for your favourite in the Top 3 , after which we’ll remove the lowest-rated mammal, clear the tallies and open voting to determine Australia’s Mammal of the Year at the same time tomorrow.

We’re almost at the end now folks – get your friends, family and random people on the train home involved to help your favourite mammal secure its place in the finals.

RIP to the rakali, you’ll be sorely missed!

Diet: This rodent is carnivorous! Aquatic invertebrates, snails, yabbies, mussels, frogs, fish and waterbirds are all part of its diet. If it lives in water and is tasty, it is likely to find its way into the rakali’s belly. They have even been known to eat turtles and some small mammals.

Habitat: Inland waters including small creeks, rivers and lakes, as well as coastal estuaries, beaches and islands in all Australian states and territories.  It also occurs in New Guinea.

Superpower: Adult water rats hold culinary masterclasses to teach their young how to open freshwater mussels – one of their favourite foods. However, the lessons vary from place to place. In some populations, young water rats are taught to put the mussel on a platform by the water’s edge and let the sun dry the mussel so that the shells fall open. In others, rats are taught to bite through the mussel shell and into the adductor muscle that works to keep the shells tightly shut.

Don’t like rats? The rakali is sure to change your mind about Australia’s amazing native rats and mice. This large and beautiful aquatic rodent is about as similar to the mice in your kitchen cupboard as a majestic tiger is to a skulking alley cat.

The name ‘rakali’ is an Indigenous name from the people of the Lower Murray River region, but there are dozens of names for this animal recorded across different parts of Australia. Rakali are common throughout their range, which extends from Tasmania and southwest WA right up to the tropics of northern Australia and New Guinea. They even occur in temporary outback wetlands along Cooper Creek and the Diamantina River. Rakali live in burrows beside the water, and spend time foraging in the water and along the water’s edge.  Like many true-blue Aussies, they love the beach and taking a dip in the creek, and are good swimmers and divers.

Unfortunately, many Australians are not aware of the rakali or of how truly magnificent this animal is. It is one of only two freshwater aquatic Australian mammals (the other is the platypus), and it lives all around us – often the only native rodent to be found in our towns and cities. They’re true “Aussie battlers” and very adaptable – I’ve seen them hunting in the Townsville marina among luxury yachts, but also in the pristine rainforest streams of the wet tropics, and in freezing cold creeks high on the New England Tableland. Get to know the beautiful rakali, and you’ll never think of rats quite the same way again.

The rakali’s Latin name – Hydromys chrysogaster – translates as “golden-bellied water mouse”. Along with that beautiful body colouration and signature white-tipped tail, the rakali has webbed feet for swimming, a face full of gorgeous long whiskers for detecting aquatic food, and eyes and ears set high on the head so it can cruise semi-submerged through the water.

Unusually for rodents, the rakali is carnivorous. They hunt both small prey, such as aquatic insects and spiders, and larger animals like yabbies, shrimps, mussels and fish.  Fish are taken from below, with the swim bladder punctured as the animal is seized. Rakali also eat waterbirds; Penny Woollard recounts an observation made by a colleague of one intrepid animal “capturing a full-sized musk duck by surprise, grabbing the tail of the bird and hanging on until the frantic duck exhausted itself, then apparently severing its neck”.  Woollard and colleagues also recorded water rats eating grebes, swamp hens and a range of other birds. These ain’t no ordinary rats!

In no particular order, here are our Top 3!

Then, at 12:00pm AEST we’ll announce the mammal that has received the least votes and our Top 2 finalists in the running to be crowned Mammal of the Year!

We’ll set the tally back to zero and open up voting to determine our winner, with voting open for two days, we’ll finally put the debate to rest (for this year at least) and crown Australia’s Mammal of the Year on Thursday 25 August!

Vote for your pick in the Top 3 here:

Originally published by Cosmos as Here’s our terrific Top 3 for Mammal of the Year! Who will you vote for?