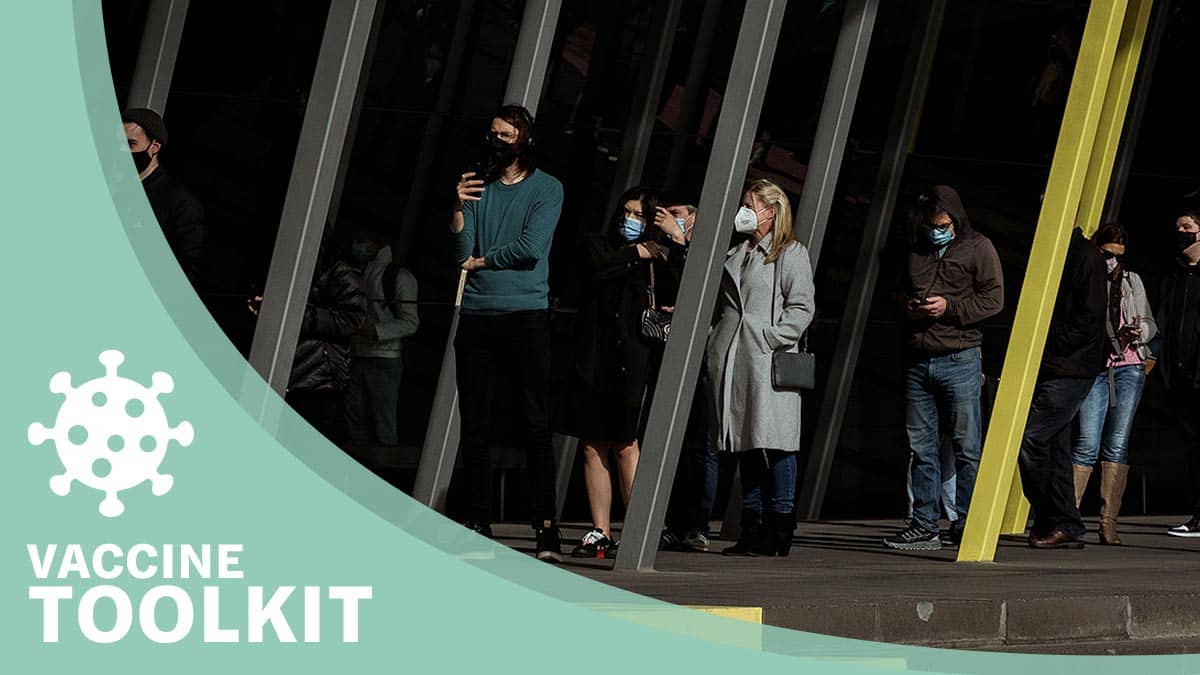 People line up outside the Melbourne Exhibition Centre COVID-19 Vaccination Centre on May 28, 2021 in Melbourne, Australia. Credit: Darrian Traynor/Getty Images.

January 2021 witnessed the first national rollout of the AstraZeneca vaccine in the UK. The good news was that it was 89% effective at protecting people from symptomatic disease.

The bad news was an unusual blood clotting syndrome that started surfacing in March 2021.

Blood clots are not uncommon – they occur in about one in a 1000 people each year. But mostly they occur in older people and in the legs or lungs.

These unusual clots were occurring in people under 40 (where the normal rate is about one in 10,000 per year), and in unusual places: in the brain (cerebral vein) or the intestine (splanchnic vein).

And while regular blood clotting or ‘thrombosis’ is associated with high levels of platelets, these clots were associated with abnormally low levels of platelets or ‘thrombocytopenia’. So clotting and bleeding, at the same time. The condition was dubbed ‘thrombosis with thrombocytopaenia’ syndrome, or TTS.  People with this syndrome also carried unusual antibodies against platelet clotting factor 4 (PF-4), a substance that is released by platelets. Rather than inactivating PF-4, those antibodies do the opposite: they work with PF-4 to trigger clotting.  The presence of those antibodies was a strong hint that TTS had something to do with the immune response to the AstraZeneca vaccine.

By April, the New England Journal of Medicine had reported that this rare clotting disorder was clearly linked to the vaccine. The estimated rate was 1 in 100,000 for people over 50 and 2 in 100,000 for people aged between 18 and 49 years. Soon, similar findings were reported for the Johnson & Johnson vaccine, which is also based on an adenovirus; so far no reports have been made for the Sputnik adenovirus vaccine.

When the Astra vaccine began its rollout in Australia in March, Australia’s vaccine surveillance network was on high alert.

Eight people have died ­– a risk of death that is less than one in a million.

Women under 50 seem to be at a greater risk of serious outcomes.

The hallmarks of TTS are clear: unusual brain or intestinal clots, low platelet counts and the clincher – the PF-4 antibody. The symptoms, including a persistent headache, usually occur with 4–30 days of the first AstraZeneca shot. They are successfully treated with an anticoagulant (not heparin, which could make things worse). Most people recover in a couple of weeks.

The story for TTS is pretty clear-cut. Rare and overwhelmingly treatable. Eight deaths out of 10.2 million AstraZeneca shots.

Israel was the first country to roll out the Pfizer vaccine on a national scale. This has meant that it has served as a global laboratory for the vaccine’s effectiveness and safety in a population of 9.4 million people over time.

In August they reported a rare but alarming side effect – inflammation of the heart muscle (myocarditis) and surrounding membranes (pericarditis). It was most often reported in young men under 30.

As the head of the study, Dr Ran Balicer, told the New York Times, “When you try to make your decision on whether or not you should take the vaccine, one of the things to ask is not only what are the potential adverse events associated with taking the vaccine, but also what am I risking when I think about COVID-19 as the other option.”

As of 5 September 2021, Australia has rolled out 10.7 million doses of the Pfizer vaccine and the TGA has received 370 reports of suspected myocarditis with or without pericarditis. They occurred more often in men under the age of 30, within 10 days of vaccination, and often after the second vaccination. Twelve reports were in teenagers aged 15–17, 10 boys and 2 girls.

Symptoms included chest pain, irregular heartbeat, fainting and shortness of breath.  Most cases resolved with rest, but a few needed hospital treatment. There have been no deaths.

Given the high background rate, the TGA needs to investigate whether all these cases are truly the result of the vaccine. At worst, the figure is around 3.4 in 100,000, slightly higher than the Israeli estimate of 2.7 in 100,000.

Overall the story for the Astra and Pfizer vaccines is pretty clear-cut. The serious adverse effects are rare and – in the vast majority of cases – treatable.

Now let’s look at the benefits

Being vaccinated does not give 100% protection against infection. But it dramatically protects you against hospitalisation and death.

Everyone is watching how Israel’s highly vaccinated population is faring against the contagious Delta strain. Their rate of infection is climbing to around their January peak of about 8,000 cases per day (in a population of nine million). Worryingly, vaccinated people are also among the hospitalised and dying.

But there’s no doubt vaccination is still highly protective. For those under 50, protection against severe disease is still nearly 92%.

Israelis over the age of 50 have borne the major brunt of disease and death. Their protection against severe disease has dropped from 95% to 85%.

First, Delta is twice as contagious as the earlier Alpha strain. It overwhelms us both through brute force – churning out more virus particles in every exhalation – and stealth, by better evading human antibodies.

Second, the older Israeli population were the first to be vaccinated and their immunity has waned over time. (It’s not a surprise. Coronavirus is the same type of virus as the one that causes the common cold – and we don’t have much luck developing enduring immunity to that.)

Reports of waning immunity to the vaccines have started appearing. One preprint from Israel showed that four months after being vaccinated, the initial protection against a breakthrough infection had halved.

A UK preprint showed Pfizer effectiveness against infection waned from 90% to 78% after three months. On the other hand, the Astra vaccine’s effectiveness seemed more durable, dropping from 69% to 61%.

In NSW we’re also starting to see that the vaccinated elderly are at higher risk. Between June and August this year, of the 50 people who died, five were fully vaccinated. Two were in their 70s, one was in their 80s and two in their 90s.

It’s sobering data, but vaccines are between 85% and 90% effective at protecting you from severe illness and death from COVID-19. The dangers of catching COVID far outweigh the dangers of the vaccines.

Originally published by Cosmos as The rollout: The danger of vaccines vs the danger of COVID