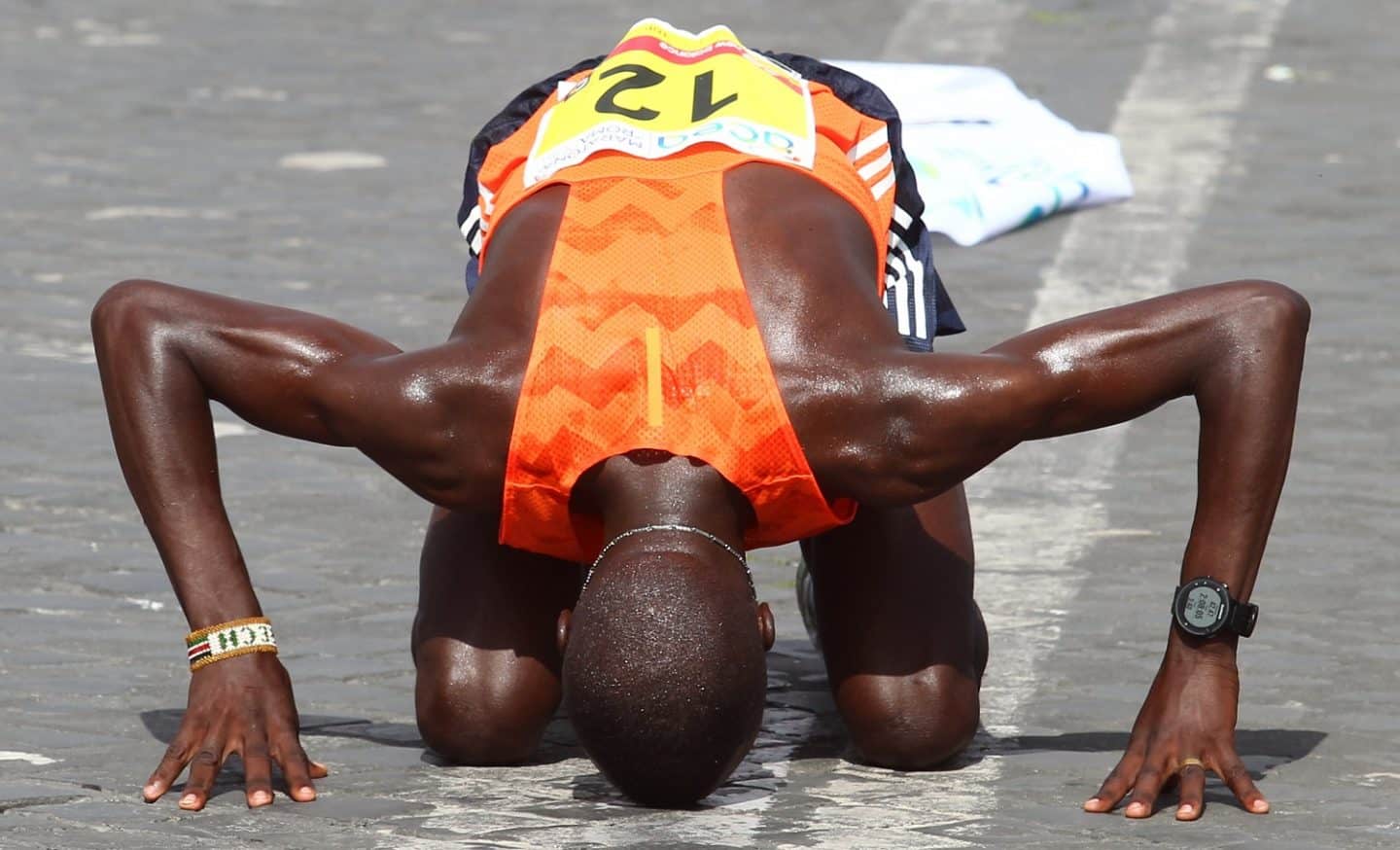 Cosmas Birech kisses the ground after winning a marathon in Rome in 2018. Compared to true endurance events, such as mountain climbing or being pregnant, marathons are considered "short" races. Credit: Activa/Action Plus via Getty Images

The ultimate limits to human endurance-race performance, scientists say, may not be determined simply by strength and stamina, important as those are.

Rather, they may be related to the body’s ability to process energy from food.

Athletes have long known that calories are important. Bicycle races such as the Tour de France have been described as “eating contests on bicycles”, says Herman Pontzer, an evolutionary anthropologist at Duke University, Durham, North Carolina.

“It’s [about] how well you can get calories into your body,” he adds.

In the short run, of course, it is possible for your body to supplement its kilojoule intake by drawing on stored energy — that is, fat. Even the leanest athlete has enough of this to carry on for many days.

But in really long events, the body is forced to rely on its ability to refuel, and that, Pontzer says, produces a “very clear” metabolic “ceiling” on what it can do.

To get a handle on this limit, Pontzer’s team turned to an event lasting vastly longer than the Tour de France, a one-off contest called the Race Across the USA, in which competitors ran across the continent at the rate of about a marathon a day for 140 days.

Using non-radioactive isotopic tracers to study the body’s metabolism during the course of the race, the researchers determined how much energy the runners were processing per day (including time spent off their feet). They then compared it to what other researchers had found for other events.

When average daily energy expenditure was plotted against race duration, the result was a hockey-stick-shaped curve that fell off rapidly from “short” events such as the marathon then tailed off for longer ones such as the Race Across the USA.

Furthermore, Pontzer says, the same curve applies to a wide range of activities, including not only running and cycling, but also swimming, arctic trekking, and doing 33 Ironman triathlons in 33 days. Even the daily kilojoule expenditures of pregnancy — not conventionally viewed as an athletic event — fall on the same curve.

All told, he says, the body’s ability to expend energy in endurance events does not appear to be sustainable at levels higher than about 2.5 times its base metabolic rate – which for most people is about 10,460 to 12,552 kilojoules a day.

The fact that so many activities fall on the same curve, Pontzer adds, suggests that the limiting factor probably isn’t related to muscles, since different muscle groups are involved in different sports.

Rather, it appears to be related to the body’s ability to supply energy over prolonged periods. Above that magic threshold of 2.5 times your base metabolic rate, he says, you can stuff as much food in your face as you can stand, but your body won’t be able to absorb it.

The fact that pregnancy falls on the same curve, he adds, is particularly interesting because in that scenario the body’s need isn’t so much to provide extra energy for its own muscles as to provide kilojoules for the growth of the baby.

“That says it’s energy supply that is the limitation,” he says.

Other scientists are intrigued.

Jared Fletcher, an exercise physiology professor at Mount Royal University, Calgary, Canada, notes that in shorter events there’s something known as the speed/duration relationship, which basically means that the shorter the distance, the faster you can go.

That’s because in short races the body draws more heavily on anaerobic energy sources – ones that do not require oxygen – which it has in relatively short supply. But in theory, he says, this should level out at a “critical speed” fuelled entirely by aerobic, oxygen using, sources.

But of course, humans can’t run forever. Not only do they need to sleep, they have to eat. And, he notes, there are only so many hours in a day. “You only have so much time to refuel.”.

“This is most interesting,” says Tim Noakes, an exercise physiologist at Cape Town University, South Africa.

He notes, though, that other limitations may also be involved, including the need to recover for the next day’s exercise.

“The study sounds logical, but I suspect it has something also to do, at least in running, with being on your legs for so many hours a day. Once you exceed a certain amount, you can’t recover.”

Daniel Lieberman, an evolutionary biologist at Harvard University, Massachusetts, US, also finds the new study fascinating. Of particular interest, he says, is the fact it cites “overfeeding” studies in which people ate vast quantities of food, while researchers tracked their weight gain. These studies also found that there is a limit to how many kilojoules the body can process a day.

However, from an evolutionary perspective Pontzer doesn’t believe that these limits are based on our ancestors’ needs to engage in extreme activities such as running across continents.

Rather, he says, the maximum level at which the human body can absorb food is probably related to pregnancy and the body’s need to eat enough to sustain a successful pregnancy.

“Because the rule of pregnancy is you have to be able to gain weight,” he adds.

Our ability to convert that energy system into extreme sports, he says, is probably simply a side effect of that all-important evolutionary driver.

Lieberman would agree. “From an evolutionary biology perspective, I’m not sure how relevant extreme endurance is,” he says. “We can safely say that no one in the Paleolithic ever engaged in this sort of extreme endurance. It’s a very abnormal behaviour to run a marathon every day for half a year!”

The new study appears in the journal Science Advances.

As well as science writer, Richard A Lovett is a professional running coach. His clients include members of the US women’s Olympic marathon squad.

Originally published by Cosmos as Humans have a metabolic ceiling