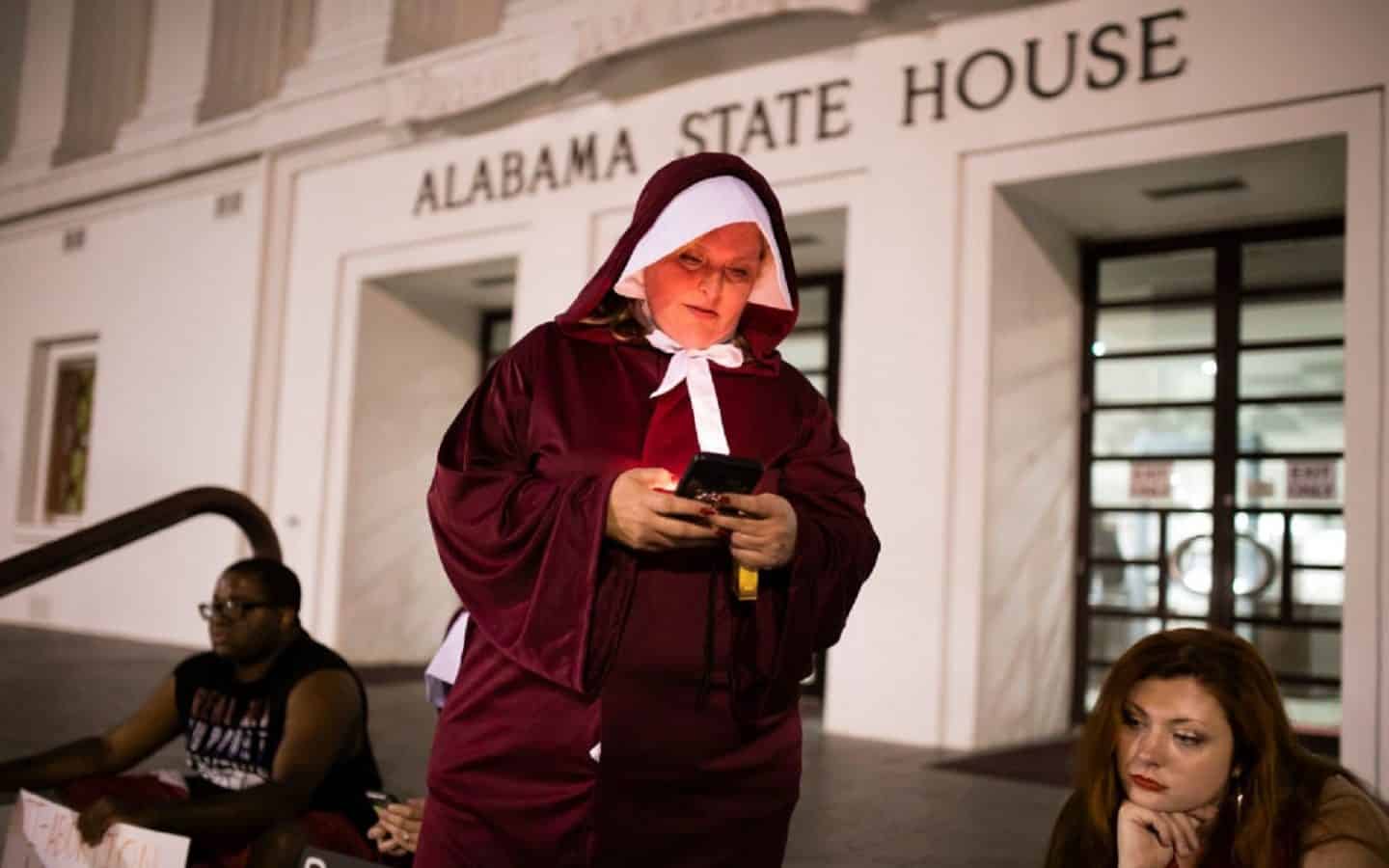 Protestors outside the Alabama State House in May this year, following the passing of legislation that banned abortion in virtually all cases. Credit: Elijah Nouvelage for The Washington Post via Getty Images

A doctor has penned a stirring account of having to refuse termination of pregnancy to a woman carrying a foetus with no brain, citing US anti-abortion laws.

Writing in Annals of Internal Medicine, publireshed by the American College of Physicians, the doctor describes the woman pleading with “her eyes” to “end it”, but being unable to comply because of strict state laws.

“You talk to the obstetricians … But nobody will do it. Not in this state. Not in this hospital. And so, the mother goes home, pregnant and grieving,” writes the doctor, who remains anonymous.

Within a few days the woman returned in premature labour and the baby was delivered, but died shortly afterwards.

“The baby is born with no skull, eyes like gumballs too big for their sockets. Alive, briefly. It hurts to look. Grotesque is all you can think, but you cannot say it,” the doctor writes.

Being born with large parts of the skull and brain missing is called anencephaly, a birth defect that affects around one in 5000 pregnancies and is universally fatal. About three quarters of infants are stillborn, with the rest usually dying within hours, although some survive for days or weeks.

The cause is unknown, but women who are low in folic acid (vitamin B9) or take certain prescription drugs during pregnancy may be at increased risk.

The doctor points out, with discernible bitterness, that much of their practice is devoted to saving the lives of very ill babies with little chance of survival.

“You’ve commanded millions of health care dollars on behalf of infants born with fatal diagnoses,” he or she writes.

“You’ve seen these infants cut, lanced, and battered in the name of intensive care. Do everything.

“You’ve enabled false hopes, not for cures but for time to bond, hope, and heal. It is the parents you are healing… all these children died in the end.”

The account comes amid a wave of conservatism in the US, with a number of states tightening abortion laws. This year, six states have introduced so-called “heartbeat” bills, which ban abortion once a heartbeat is detected on ultrasound, usually around six weeks gestation. Louisiana passed legislation last week that vetoes abortion even in cases of rape or incest.

The bills face legal challenges that may lead the Supreme Court to review the constitutional right to abortion set in the landmark 1973 case Roe v. Wade. Some commentators suggest Roe v. Wade is under threat from the appointment of conservative judge Brett Kavanaugh to the US Supreme Court last year.

In Australia (where Cosmos is based), so-called “medical abortion” with the drug RU486 is legal up to nine weeks in all states and territories except South Australia and the Australian Capital Territory.

Laws on surgical abortion vary widely by state. In Victoria, for example, abortion is legal up to 24 weeks, and beyond that with the approval of two doctors. In NSW, all abortion remains technically a crime unless carried out to “avoid a serious danger” to the life or health of the woman.

Pro-choice arguments hold that respect for personal autonomy underpins a woman’s right to decide what happens to her body. The title of the doctor’s story – “The Myth of Choice” – is a moving reminder that the fight for women’s reproductive rights does not let up.