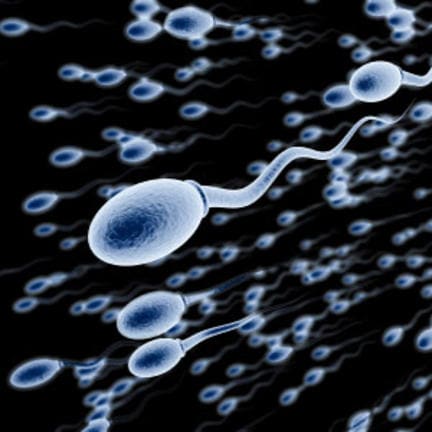 Scientists suspect that the longer sperm stays in the testicular ducts, the more it is exposed to rogue oxygen molecules that may damage it. Credit: iStockphoto

Men who want to become fathers should have sex or ejaculate daily in order to maximise sperm quality, scientists report.

Before the test, 34% of the group’s sperm was rated as damaged, meaning that it was classified as ‘poor’ in quality. For individuals, 15% to 98% of their sperm were classified as such.

The men were asked to ejaculate daily for seven days, but were not given any drugs or told to make any changes to lifestyle. After seven days, their sperm was examined again. The average of damaged sperm fell to 26%, placing it in the category of ‘fair’ in quality.

Greening presented his findings the European Society of Human Reproduction and Embryology in Amsterdam, The Netherlands on Tuesday.

Men who donate or have their sperm collected are usually told to avoid ejaculation two to three days before collection. But this study may challenge this ingrained idea.

Greening, an obstetrician and endocrinologist at Sydney IVF, an Australian company that carries out assisted reproduction, said the improvements were “substantial and statistically highly significant.”

Daily ejaculation not only boosted sperm quality for most of the men, it also helped sperm motility – another big factor in successful fertilisation – even though volumes of semen declined, he said.

The research did not investigate whether the improvement in sperm quality led to better pregnancy rates. But previous work has shown that sperm that is less damaged and more mobile has a better chance of leading to a healthy baby.

“These results may mean that men player a greater role in fertility than previously suspected, and that ejaculatory frequency is important for improving sperm quality,” said Greening. Why this is so is unclear.

Greening said he suspected that the longer sperm stays in the testicular ducts, the greater its exposure to rogue oxygen molecules that damage cells. His advice to couples would be to have sex, or to ejaculate, daily in the run-up to ovulation or to sperm donation for in-vitro fertilisation (IVF).

“The optimal number of days of ejaculation might be more or less seven days, but a week seems manageable and favourable,” he said. “It seems safe to conclude that couples with relatively normal semen parameters should have sex daily for up to a week before ovulation date.”