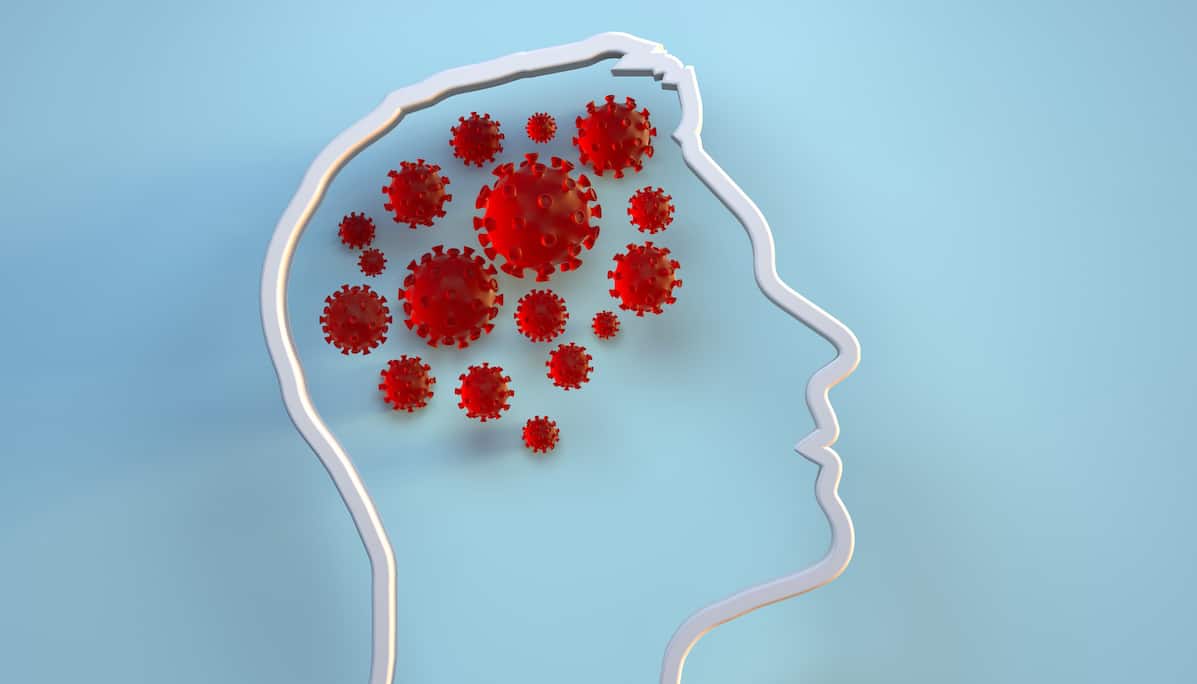 Digital generated image of silhouette of male head with covid-19 cells inside on blue background.

1. Gut bugs could influence the severity of COVID

COVID-19 is primarily a respiratory illness, but the gut may also affect its severity and the body’s immune response. That’s the finding from a study out of China, published in the journal Gut.

Analysis of 274 stool samples showed the gut microbiome’s makeup differed between patients with and without COVID-19, regardless of whether they had been treated with medication, including antibiotics.

COVID patients had higher numbers of Ruminococcus gnavus, R. torques and Bacteroides dorei species than people without infection. They also had far fewer species that can influence immune response such as Biofidobacetirum adolescentis, Faecalibacterium prausnitzii and Eubacterium rectale.

The authors say that while the study is observational, it points to mounting evidence showing that gut microbes are linked to inflammatory diseases within and beyond the gut.

2. COVID-19 is here to stay, but it will resemble the common cold

As vaccines begin to roll out globally, scientists are casting their sights ahead to see what the world will look like with COVID-19.

A study, published in the journal Science, suggests that while COVID-19 is here to stay, it will be no more of a threat than a common cold. However, this scenario will only occur following natural infection or vaccination.

The study, led by Emory University in Atlanta, US, looked to six other coronaviruses with human transmission chains. Four human coronaviruses (HCoVs) are endemic, meaning they cause only mild symptoms and are not a significant health burden – including the common cold.

The other two HCoV strains – SARS CoV1 and MERS – have higher case-fatality and infection-fatality ratios than COVID-19, but were never widely spread (and have not been never contained).

The researchers suggest that COVID-19 is similar to the endemic common cold coronaviruses, and that it will eventually only be a concern in children younger than five – who will likely only experience sniffles or no symptoms at all.

While vaccinations won’t eradicate the virus completely, without it, the fastest way for the virus to become endemic is widespread illness and high fatality rates.

Scientists are calling for an immediate pause on the planned roll-out of the AstraZeneca COVID-19 vaccine in Australia. Their concern is that the vaccine may not be effective enough to generate herd immunity.

“The published data on the efficacy of the AstraZeneca (Oxford) vaccine involves relatively small numbers of subjects and a number of different dosing regimens,” explains Linda Selvey, from the School of Public Health at the University of Queensland. “In particular, there were very few participants who were over 55 years old.”

However, Adrian Esterman, Chair of Biostatistics at the University of South Australia, says the AstraZeneca vaccine could still be very useful.

“In other countries where the epidemic is rampant, an efficacy of 60% would still be very helpful in dampening down transmission and providing relief to the hospital services,” he explains.

“However, Australia is luckily not in that position, and there is a strong argument for vaccinating as soon as possible the at-risk population with two doses of the Pfizer-BioNtech vaccine, and holding off for the rest of the population until more doses of it are available.”

4. COVID-19 virus can infect brain cells and cause damage

By looking at both human and mouse brain tissue, US researchers have found that SARS-CoV-2 can directly infect the central nervous system.

The study, published in the Journal of Experimental Medicine (JEM), found the virus could infect neurons in human brain organoids – miniature 3D organs grown in the lab from human stem cells – and use them to replicate itself. To facilitate replication, the virus boosts the metabolism of infected cells, while neighbouring, uninfected neurons die from lack of oxygen.

The virus was also shown to infect the brains of mice who were genetically engineered to produce the human ACE2 protein, which SARS-CoV-2 binds to in order to enter the lungs. The team determined the ACE2 protein is produced by neurons and that blocking it prevents the virus from entering human brain organoids.

Adding weight to the findings was brain-tissue analysis of three patients killed by the virus. SARS-CoV-2 was detected in the cortical neurons of one of these patients. Infected brain regions were associated with ischemic strokes, where decreased blood supply causes tissue damage and cell death.

“Our study clearly demonstrates that neurons can become a target of SARS-CoV-2 infection, with devastating consequences of localised ischemia in the brain and cell death,” says co-senior author Kaya Bilguvar.

5. Men of all ages are more affected by COVID-19 than females

Analysis of almost 100,000 US adult health records has found a clear association between male sex and SARS-CoV-2 susceptibility, complications and poor outcomes.

Small studies from China and Europe have previously indicated that males tend to experience higher disease severity than females.

“The exact contribution of gender and sex factors in susceptibility and outcomes of COVID-19 need further investigation,” the authors add.