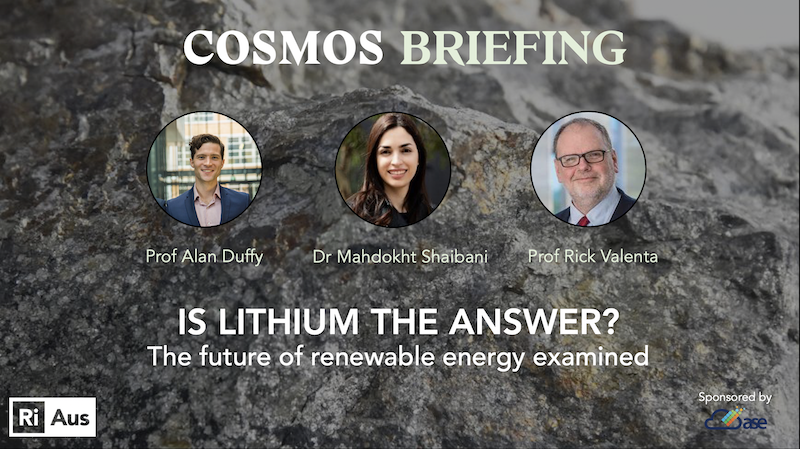 Our next regular Cosmos Briefing asks the question: Is Lithium the Answer?

We are drilling down on lithium and the future of renewable energy with energy and mining experts. Ahead of the webinar on 21 January, we take a look at five things you didn’t know about lithium.

Lithium was the only metal produced in the Big Bang 13.7 billion years ago. Relatively little has been produced since, and the exact mechanisms of its production are still debated. Scientists think about half is created when high-energy cosmic rays slam into heavier elements like carbon and oxygen in interstellar space, breaking them up into lighter atoms. In 2020, astronomers discovered that a certain type of red giant stars also become lithium factories at the end of their lives, based on a survey of hundreds of thousands of stars.

It’s king of the battery world

Lithium’s properties currently make it superior to all alternative battery materials. As the least dense metal, lithium has the highest energy storage per kilogram, making it ideal for mobile applications where weight matters, such as in cars – a Tesla car can operate on a lithium-ion battery weighing 600 kg; this would be 4 tonnes (4000 kg) or more if it relied on lead-acid batteries. Unlike lead-acid batteries, lithium-ion batteries can be discharged down to around 10% capacity without failure, and recharged and discharged thousands of times.

Half the world’s lithium is mined in Australia

Lithium supplies are finite, but last year scientists made progress towards tapping into another enormous source. The world’s oceans are estimated to contain 180 billion tonnes of lithium, but it’s incredibly diluted; the concentration is around 0.2 parts per million. This means it’s much more expensive to extract than lithium in rock or brine as it requires evaporating away much of the water. But researchers are working on more efficient methods. Last year, a Stanford University-led team used lithium-ion battery electrodes to pull the element directly from seawater. At the moment, the technique also extracts unwanted sodium, too, but as technology advances so too will the selectivity.

The artificial Salton Sea in California is poised to become a “Lithium Valley”, with investors, policymakers, start-ups and energy providers pushing to build a domestic battery manufacturing, mining and innovation hub. The plan is to extract lithium from the brine already being pumped to the surface by 11 geothermal power plants. Research suggests it could produce 17,000 tonnes of lithium every year. This may be a chance to mine lithium in a sustainable way, considering the high environmental cost of lithium mining elsewhere. South America’s Lithium Triangle, for example, is one of the driest places on Earth but extracting lithium from the briny salt flats is incredibly water-intensive, which is severely impacting local farmers. Industrial-scale habitat destruction and chemical contamination are also hot issues, but California’s Lithium Valley could become an example of how to mine lithium in a “green” way.