Dating with the parents: bonobo mothers help sons get it on

For humanity’s closest relatives, sex is rarely private and often a family affair. Ben Garrod from the UK’s University of East Anglia reports. 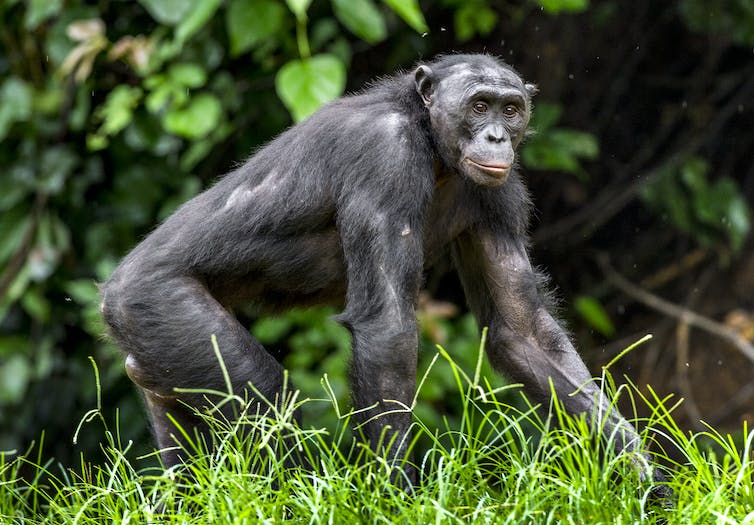 Dating is never easy, for any of us. Scenarios play over in our heads, classic questions and worries bombard us. Will she like me? Does he share the same interests? Will my mum be watching us have sex? Thankfully, that last question isn’t actually one we humans have to deal with. But new research shows that for bonobos, sex really is often a family affair. What’s more, rather than being an embarrassing hindrance, motherly presence greatly benefits bonobo sons during the deed.

Along with chimpanzees (Pan troglodytes), bonobos (Pan paniscus) are our closest living relatives. Restricted to a 500,000 km² thickly-forested zone of the Congo Basin, these endangered great apes were only formally discovered in 1928, which until 2017 made them the most recently-described living great ape species.

Operating in female-led social systems, bonobos are capable of showing a wide range of what were long held as human-specific feelings and emotions, such as sensitivity, patience, compassion, kindness, empathy and altruism.

They’re also perhaps the most promiscuous non-human species on the planet. While chimpanzee sex is tied closely to reproduction, up to 75% of bonobo sexual behaviour is purely for pleasure. From saucy greetings and social bonding to conflict resolution and post-conflict make-up sex, sex serves hugely important functions in most aspects of bonobo social behaviour. Even the mere discovery of a new food source or feeding ground is enough to spark a wave of communal sexual activity.

It seems that the number of reasons for a bonobo to have sex is surpassed only by the number of forms in which they do it. Indiscriminate of sex and age, the only combination strictly off limits in bonobo society is between a mother and her mature son. In addition to standard penetrative encounters, they frequently engage in manual genital massage and oral sex. These positionally creative apes are also the only animal (other than us) to practice tongue-on-tongue kissing or face-to-face penetrative sex. The prominence of bonobos’ sexual behaviour in social life has led researchers to brand bonobos as the “make-love-not-war apes”.

Bonobo mothers, however, seem to make a war out of seeing their sons successfully make love. They’ve frequently been observed to form coalitions with their sons to help them acquire and maintain high dominance rank, protect their sons’ mating attempts from interference by other males and even interfere in the mating attempts of other, unrelated males.

The new research, published in Current Biology, shows that these strategies pay off. Males who had a mother present in their social group engaging in these behaviours were about three times more likely to produce offspring than males whose mothers were no longer part of the group.

Mothers of successful bonobo fathers were present more than twice as frequently during conception than in chimpanzees, a species in which males are socially dominant, and in which maternal presence provided no benefit to sons. Thus, it appears that the dominance of females in bonobo social systems allows mothers to exert behavioural influence to boost the sexual fitness of their sons.

This elevated female social power doesn’t just let bonobo mums get involved in their families’ sex lives, but is likely responsible for a host of peaceful and progressive traits rarely seen in the mammal world. Females practice sex even when not ovulating, male-male competition is much reduced, and the species is remarkably tolerant to bonobos from outside of their social group. Perhaps us humans ought to take note of how positively society can change when females are in positions of influence. It’s probably better if we keep our sex lives parent-free, though.

The history of the evolution of sex may be written in our mitochondrial inheritance.

Mother birds live longer with a little help from their friends
Getting crabby with it: fossil throws crustacean evolution into disarray
Popular Today
More