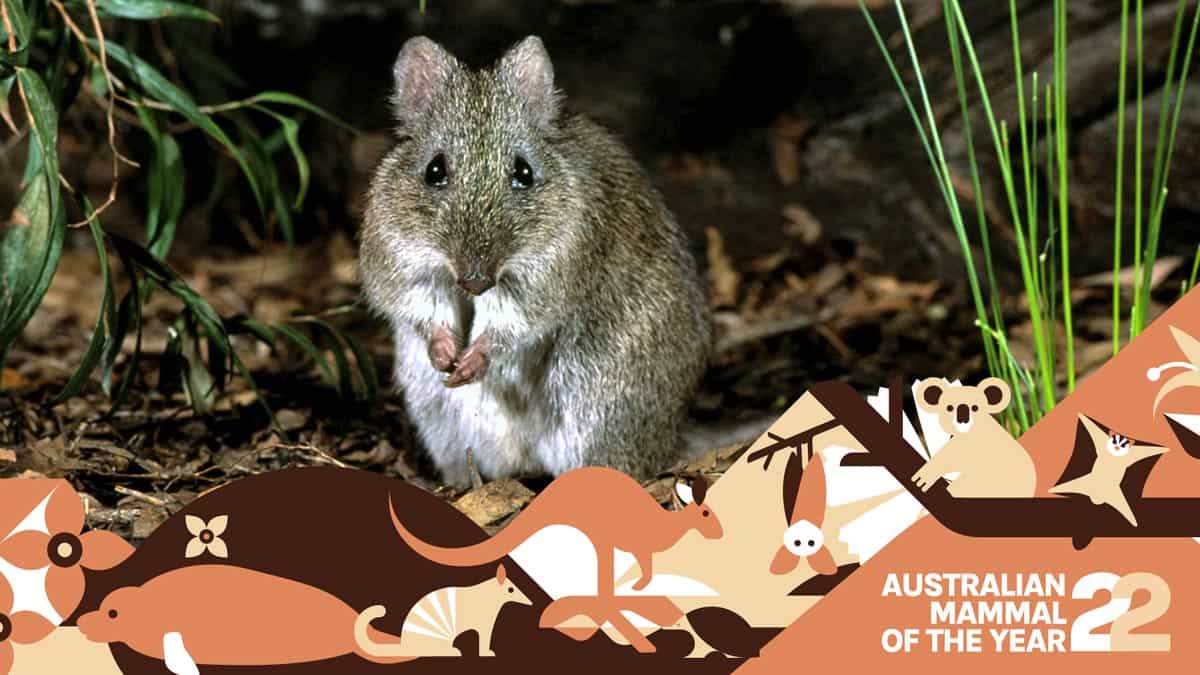 Diet: About 94% truffle-like fungi and a small percentage of invertebrate and plant material

Superpower: After missing from the records for 120 years and thought extinct, it has come “back from the dead”.

Have you heard of Lazarus species? Named after the man in the Bible story who Jesus is said to have raised from the dead, these are species that reappear after being thought extinct. The story of Gilbert’s Potoroo is one of Australia’s most extraordinary.

Gilbert’s Potoroo is a small kangaroo-like marsupial with thick, soft brown-grey fur, a long, slender slightly downward curving nose, and forepaws with powerful claws for digging for the truffle-like fungi that make up 94% of its diet. John Gould scientifically described it in 1841 from a specimen and notes provided by the naturalist John Gilbert (hence the name). Gilbert reported that it occupied the “spearwood and rank vegetation surrounding swamps and running streams” and was “the constant companion” of the Quokka (the smiling marsupial of Rottnest Island selfie fame).

It was recorded a few more times until the 1870s, and then disappeared. By 1909 it was thought to be extinct – gone, apparently forever, with very little known about it.

Surveys searching for Gilbert’s Potoroo along the south coast of WA in 1975-76 caught many Quokkas – but no Potoroos. In 1994, a team surveying for Quokkas at Two Peoples Bay spent over a week without trapping a single Quokka, but then unexpectedly caught an unfamiliar species that turned out to be the supposedly extinct Gilbert’s Potoroo!

The excitement was intense, but so too was the fear. Gilbert’s Potoroo was living in dense, very long-unburnt vegetation – and a single catastrophic bushfire could wipe out the small rediscovered population. Attempts at captive breeding were unsuccessful, so from 2005 the focus shifted to carefully creating “safe haven” populations using Two Peoples Bay animals as founders. Over the next few years, populations were established on Bald Island and in a fenced enclosure at Waychinicup National Park.

In 2015, the feared bushfire, ignited by lightning, incinerated over 90% of Gilbert’s Potoroo habitat at Two Peoples Bay leaving only a handful of survivors. After the fire another “safe haven” population was created on Middle Island off Esperance, but for the species to have the best chance of long-term survival it’s critical that a new mainland population is established urgently.

The location for this new population will require a year-round supply of truffle-like fungi, thick vegetation for shelter, adequate control of foxes and cats, and the capacity for substantial population expansion.

As an almost exclusive truffle-eater, Gilbert’s Potoroo plays a critical role in ecosystem health and the impact of losing it on vegetation communities is not yet understood.

We’ve been given a second chance to protect this beautiful species and enable it to continue its work digging the soil, eating truffles and spreading their spores, thereby helping to protect the health of its habitat into the future. With a known population of only 100-120 individuals, it is the world’s rarest marsupial and needs all the help we can give it to ensure its survival.

Gilbert’s Potoroo has almost been lost once already – let’s make sure it never goes extinct for real.

Originally published by Cosmos as Gilbert’s potoroo: the beautiful little fungi-eater that came back from the dead