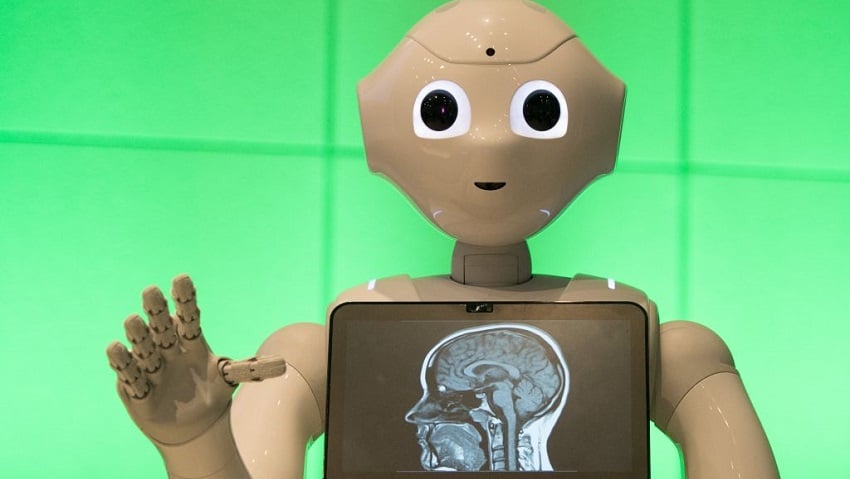 What does a robot think?

Talking to yourself isn’t just for humans – it’s for robots, too.

Alexa, Google and Siri often hear us incorrectly, so Italian researchers designed a robot that ‘thinks’ to learn why other robots are getting so confused.

‘Pepper’ the robot processes instructions out loud, so the user can see where to troubleshoot. When Pepper was setting the table but was instructed to put a plate in a spot that was against its prewritten etiquette rules, it thought: “Ehm, this situation upsets me. I would never break the rules, but I can’t upset him, so I’m doing what he wants.”

“People were very surprised by the robot’s ability,” says lead author Arianna Pipitone from the University of Palermo, Italy. “The approach makes the robot different from typical machines because it has the ability to reason, to think. Inner speech enables alternative solutions for the robots and humans to collaborate and get out of stalemate situations.”

The paper was published in iScience.

This video shows reasoning: When a robot engages in inner speech and reasons with itself, humans can trace its thought process to learn the robot’s motives and decisions. Credit: Antonio Chella, Arianna Pipitone

How to mend a broken heart

A study by Monash University has uncovered a way to reverse the damage of broken heart syndrome.

Takotsubo cardiomyopathy is a heart condition that affects blood pumping, and develops after an intense emotional or physical experience. The team, led by Sam El-Osta from Monash, showed the benefit of a drug called Suberanilohydroxamic acid in a preclinical trial. The results were published in the journal Signal Transduction and Targeted Therapy.

“We show for the first time a drug that shows preventative and therapeutic benefit is important to a healthy heart,” says El-Osta. “The drug not only slows cardiac injury, but also reverses the damage caused to the stressed heart.”

Jane Austen written in the language of polymers

Forget English, a passage from Jane Austen’s Mansfield Park is now written in oligomers, as shown in a paper published in Cell Reports Physical Science.

Storing data in DNA is a useful method of distilling high volumes of information, but this new technique uses oligomers, small molecules that have side chains, which store the data in a more compact form than in DNA.

“This work is another step toward the long-term goal of using synthetic sequence-defined polymers for information storage,” says Eric Anslyn, co-author of the study and a chemistry professor at the University of Texas at Austin.

“It sets the stage and hopefully inspires further work towards the practical use of molecules to usefully store information.”

The passage from Mansfield Park reads: “If one scheme of happiness fails, human nature turns to another; if the first calculation is wrong, we make a second better: we find comfort somewhere.”

“This particular passage was chosen because we felt it was uplifting in these trying times, and it is easily understood without the context in the book,” says lead author Samuel Dahlhauser from the University of Texas.

Could a volcano power a country?

Practically speaking it would be difficult, but some underwater volcanoes do produce enough energy to power the whole of the USA, according to a paper published in Nature Communications.

A team from the University of Leeds, UK, analysed volcanoes in the northeast Pacific Ocean and found a link between the ash generated by underwater volcanoes and megaplumes – very hot columns of water.

The study suggests that the megaplumes are caused when the lava pushes huge reservoirs of hot water up and out very rapidly, releasing huge amounts of energy.

“Our work provides evidence that megaplumes are directly linked to the eruption of lava and are responsible for transporting volcanic ash in the deep ocean,” says Sam Pegler, a mathematician who worked on the paper.

“It also shows that plumes must have formed in a matter of hours, creating an immense rate of energy release.”