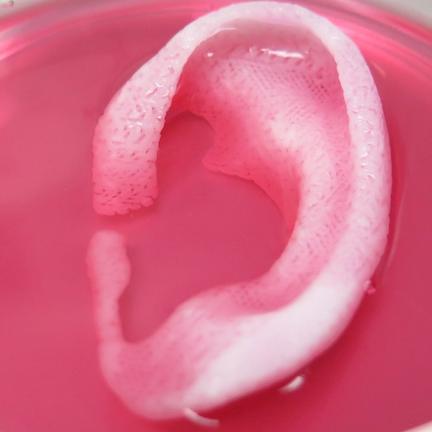 That possibility is now within reach, thanks to a new bioprinting method developed by a group of US scientists who have printed living, life-sized tissues which continued to thrive after being implanted in animals.

Thanks to specialised high-precision 3-D printers, layering living cells in complex shapes to resemble tissues and organs is nothing new.

But where tiny beating heart chambers or micro-livers in petri dishes may be great for testing different drugs in a lab, researchers haven’t managed to scale them up to “real” size.

The problem is printed tissues are fragile. And without blood vessels providing a steady oxygen and nutrient supply, they don’t survive long enough to integrate with the body.

Now, the US team funded by the Armed Forces Institute of Regenerative Medicine found a solution, which they have published in Nature Biotechnology.

The technology they developed involves printing tissues as two separate components – a bio-degradable plastic that forms the tissue “shape” and a water-based gel ink that contains the living cells.

The printed structure is perforated with micro-channels that allow nutrients and oxygen from the body to diffuse in to keep the tissue alive, and to let blood vessels grow through it.

Using this method, the team used their cell "ink" and biodegradable polymer to print a human-sized ear, a section of muscle tissue and a human-sized jaw bone fragment.

Each part, implanted in rats or mice, became vascularised with blood vessels and innervated by nerves, indicating they were functional in weeks to months after they were implanted.

The trials are ongoing with researchers still tracking the long-term progress.

One benefit of the technique, the authors say, is that it uses data from CT and MRI scans to tailor the tissues to patients. For a patient missing their left ear, for example, the system could print a matching structure based on a scan of the right ear.

“With further development, this technology could potentially be used to print living tissue and organ structures for surgical implantation in humans,” said Anthony Atala, the paper’s author and director of the Wake Forest Institute for Regenerative Medicine.