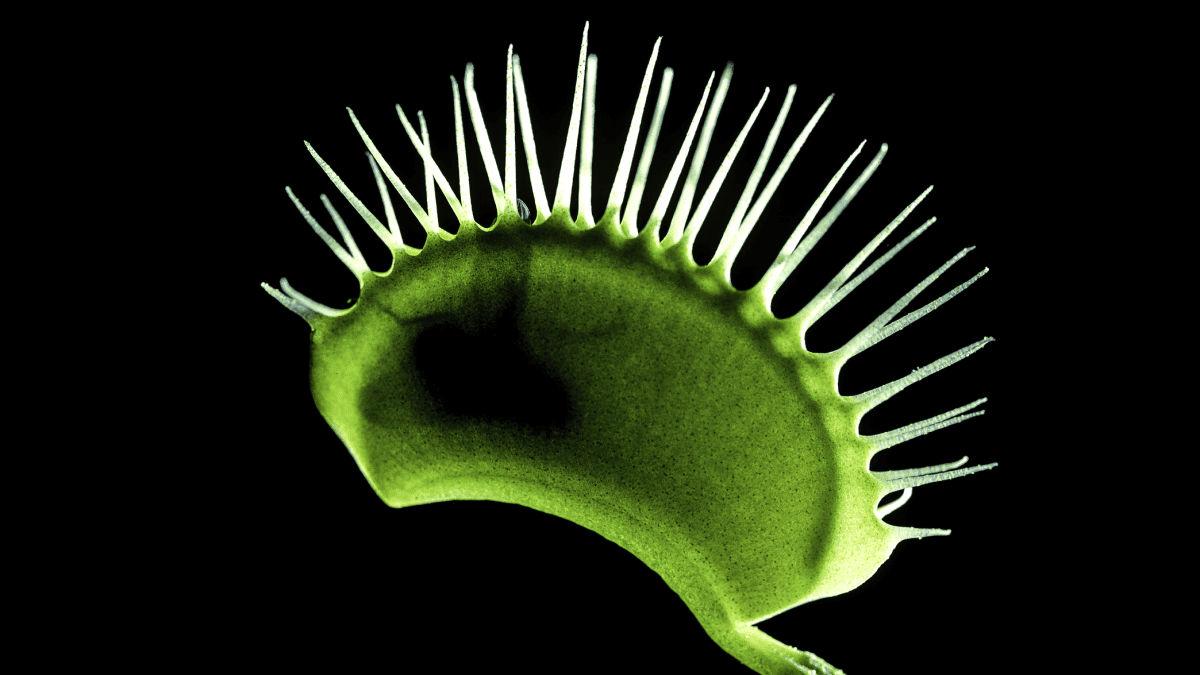 A Venus flytrap doing what it does best. Credit: Paul Starosta / Getty Images.
More on:
biomimicry

A team of Swedish researchers has successfully used a printed artificial neuron to control the movement of a Venus flytrap plant, forecasting that it could aid the development of futuristic medical devices and brain-machine interfaces.

Existing silicon-based circuits and devices, such as those used in current computers, are difficult to integrate with biological systems due to their complexity, poor biocompatibility and low energy efficiency.

By contrast, the artificial neuron is based on organic electrochemical transistors, which more closely resemble electrical signalling systems found in biology.

“The human brain is one of the most advanced computers ever made,” says Simone Fabiano, an associate professor at Linköping University in Sweden and senior author on the study.

“It has a massive amount of memory and is excellent at processing information and making decisions while consuming very little energy. On the contrary, man-made supercomputers are bulky and consume a lot of energy.”

The team tackled the challenge of creating an artificial neuron that approaches nature’s elegance and efficiency.

Ordinary neurons, or nerve cells, operate using electric currents, which are linked to tight control of certain charged molecules (ions) inside and outside the cell. The artificial neuron uses an organic electrochemical transistor that is controlled by ion concentration spikes, similar to biological neurons.

Compared to a silicon-based artificial neuron, Fabiano says, the new mechanism is easier and less expensive to produce. It can also operate at a lower voltage, thereby saving energy, and can interface directly with biological neurons.

Next, the researchers worked on integrating the artificial neuron with the cells of Venus flytraps. These carnivorous plants snap shut to trap their insect prey when sensitive hairs on the plant surface are stimulated twice within a short amount of time (approximately 30 seconds), leading to the release of ions within cells and a movement response.

The researchers mimicked this biological mechanism by stimulating the artificial neuron with a high-input electrical current, creating a high “firing frequency” and triggering the plant to snap shut. When stimulated with a low-input current, firing frequency does not reach the threshold and the plant remains open.

“The ability to link an artificial device with a biological system is crucial to the success of these domains,” the authors write in the study.

“Neurons, together with synapses, are the building blocks of our brain,” Fabiano explains. “Being able to mimic the functioning of biological neurons with electronic devices could enable the development of artificial intelligence technologies.”

“It will take many years of research to achieve the efficiency of our brain, but I believe we are on the right track to demonstrate printed, small-scale artificial neural networks,” she adds.

The team hopes to continue work on communication between artificial and biological neurons, Fabiano says.

Metamorphosis of plants won the Award for Best Experimental/Animated film in the SCINEMA International Science Film Festival in 2016. It’s a unique film – the result of two years spent watching and analysing the movements and metamorphoses of plants – that will give a new insight into how plants work and grow, without saying a word.