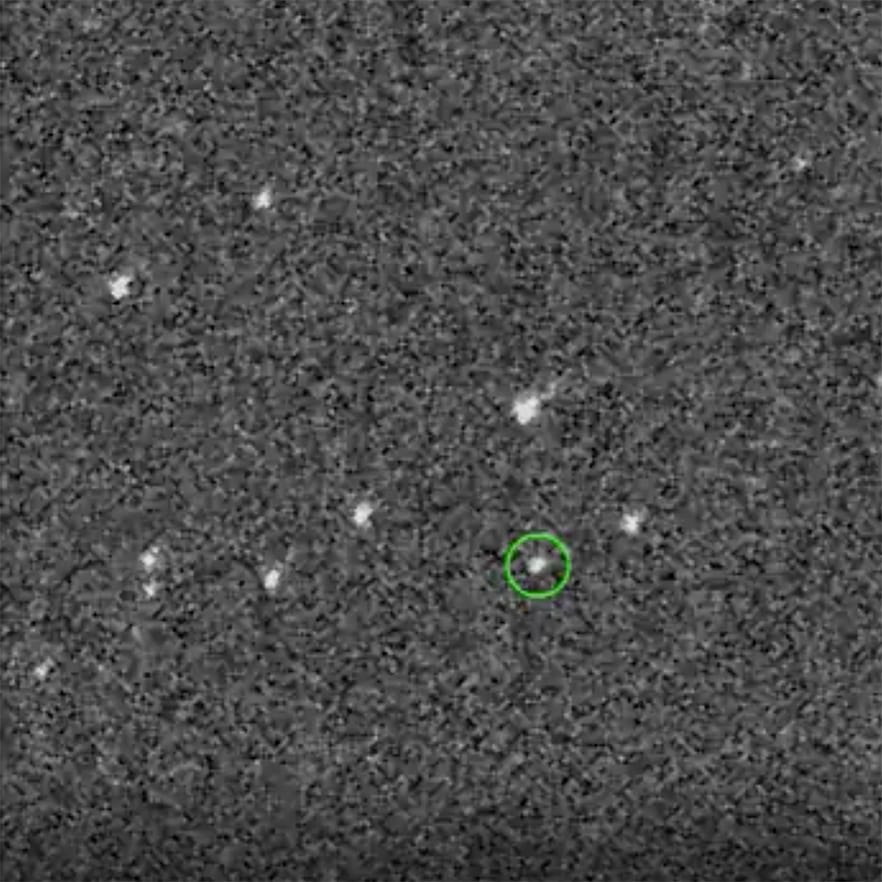 NASA’s OSIRIS-REx spacecraft, which has been traveling toward asteroid 101955 Bennu for nearly two years, has caught its first glimpse of its destination, NASA scientists have reported.

At the moment, the asteroid — the tiniest one yet to be visited by humans – is nothing but a pinpoint of light. But seeing it was an emotional moment for the science team, says Dante Lauretta, a planetary scientist from the University of Arizona in the US, who is the mission’s principal investiator.

“I can’t explain how much it meant to the team,” he says. “Many of us have been working for years and years and years to get the first image down. It represents the beginning of the great science experiment that is OSIRIS-REx.”

It was also one of those moments when the mission crew breathed a sigh of relief.

“There was a lot of good news,” Lauretta explains. “First, the asteroid was right where we thought it was, waiting for us. And the spacecraft was in the right place and pointing in the right direction.”

The spacecraft’s full name is the Origins,Spectral Interpretation, Resource Identification, Security-Regolith Explorer. It was launched on September 8, 2016, and is expected to rendezvous with the asteroid late this year. Then, after months of cautious surveys, it will make a daring five-second “touch-and-go” brush-by of Bennu’s surface, scooping up as much as two kilograms of rock and dust for return to Earth in 2023.

In the next few months, however, the spacecraft will make an enormous number of other operations, including numerous engine burns. The first two will slow its approach from its present speed of nearly 500 metres per second to approximately five metres per second.

Then from a distance as close as seven kilometres from the 500-metre asteroid, it will make a series of zigzag movements designed to survey the asteroid’s shape and gravity field in detail. These will come as often as two to four times per week, exp-lains Michael Moreau, the team’s flight dynamics system manager.

“We are doing fly-bys every two days,” he says.

Eventually, the spacecraft will insert into orbit around Bennu — a difficult task because its gravity is expected to be so weak that the velocity needed to keep in orbit, rather than zinging away, is only about five centimetres per second. “Its small size and small mass make the navigational challenges unprecedented,” Moreau says.

It’s the first time anyone has conducted close-proximity operations around such a small body, adds Sandy Freund, the project’s mission support manager at aerospace giant Lockheed Martin, who says that what will be needed is “precision flying.”

“We estimate that up to 50 command packages will be sent each week,” she says, “[with] 30,000 commands each week during the peak of proximity operations.”

In the interim, as it draws closer and its view of Bennu improves, OSIRIS-REx will be using its onboard cameras to search for hazards, including dust clouds outgassing from its surface, or moonlets as small as 10 centimetres. The spacecraft is still two million kilometres away, but at the moment nothing alarming has been spotted. “So far, so good,” Lauretta says.

When the craft arrives, it has a number of goals.

One is simply to learn more about Bennu, which has a one-in-2700 chance of hitting Earth late in the twenty-second century.

“Bennu is a potentially hazardous asteroid,” Lauretta says. Of particular interest is learning more about the way its surface absorbs sunlight and re-emits the heat as infrared radiation. This produces a tiny force known as the Yarkovsky effect, which can slowly change its orbit, either increasing or reducing its chances of hitting Earth.

But Bennu is also scientifically interesting. It probably dates back to the origin of the solar system, Lauretta says, and studying its composition will help us understand how the building blocks of life, ranging from water to carbon-containing molecules, also arrived on the infant Earth.

Asteroids such as Bennu might also be useful way stations for future interplanetary flights. Its minerals, Lauretta says, may have interacted with water, early in the solar system’s history. If so, that water might still be there, bound up in the crystalline structure of clay-like minerals from which it can be extracted by heating up the clay. This water, Lauretta says, can then be separated into hydrogen and oxygen — a powerful rocket fuel that could be stored in a depot, awaiting interplanetary spacecraft.

Meanwhile, the next few months will be “cram packed” with exciting space events, says Lori Glaze, acting director of NASA’s Planetary Science Division. In addition to OSIRIS-REx’s approach, she says, there will also be the touchdown of NASA’s new InSight Mars lander, on November 26. Then, on December 31, OSIRIS-REx will make its insertion into Bennu orbit, followed a few hours later, on January 1, 2019, by the New Horizons spacecraft’s flyby of Ultima Thule, the most distant object ever visited by humanity.

“It will be a crazy day,” Glaze says. “I hope everyone is ready to stay up all night and enjoy the whole package.”

Originally published by Cosmos as When NASA met Bennu