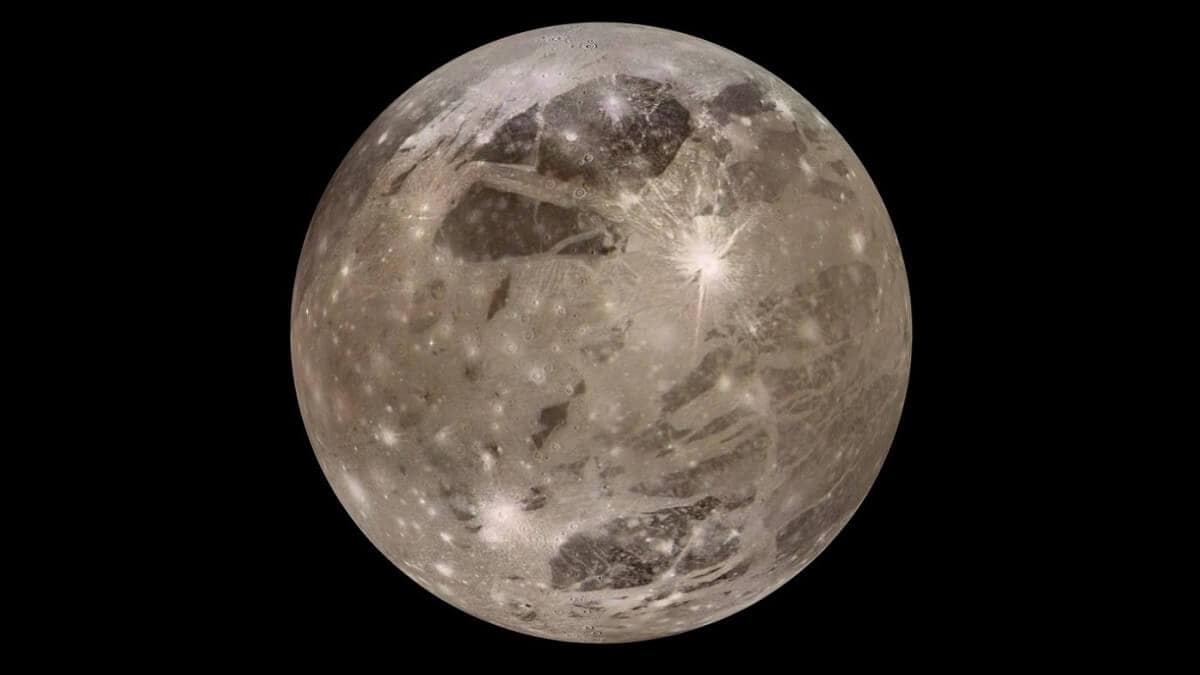 An international team of astronomers has used Hubble to peer into the atmosphere of Jupiter’s biggest moon, Ganymede – and find evidence for water vapour there.

Ganymede is the biggest of our Solar System’s moons, with a diameter of 5,200km – 1.5 times bigger than our own satellite. It’s a cold world, made up of equal amounts of rock and water, with an ocean below the surface that may contain more water than all of Earth’s oceans combined.

But it’s also the largest body in the Solar System without any kind of substantial atmosphere. When the Voyager 1 spacecraft soared by in 1979, it didn’t detect any atmosphere, although a couple of decades later the Hubble Space Telescope managed to spot a very thin and tenuous one comprised primarily of oxygen molecules (O2).

These molecules are thought to be created when charged particles and solar radiation hit the icy surface of Ganymede. This splits up the water molecules into various groups of molecules and atoms, including atomic hydrogen (H) and molecular oxygen. The lighter hydrogen is quickly lost, while the moon’s gravity holds onto the heavier oxygen molecules.

Astronomers have long suspected that there must be some water in Ganymede’s atmosphere, too, created from the same process on the surface. In particular, the icy surface “sublimates”, with ice turned directly into water vapour (H2O) and skipping the liquid stage.

Modelling has suggested that H2O should dominate the atmosphere at Ganymede’s subsolar point – that is, the warmest part of the atmosphere where the Sun’s radiation directly hits – while molecular oxygen dominates the rest.

Now, this new research has turned Hubble’s eyes back to the Jovian moon to settle this. The team, led by Lorenz Roth from the KTH Royal Institute of Technology in Sweden, used Hubble’s Cosmic Origins Spectrograph to study the chemical composition of Ganymede’s atmosphere.

The result is published in Nature Astronomy.

The team notes that finding water in Ganymede’s atmosphere will inform future space missions, including the European Space Agency’s Jupiter Icy Moons Explorer (JUICE). Expected to reach the gas giant in 2031, JUICE will make several fly-bys of the moons before settling into orbit around Ganymede in 2034 for at least 280 days.

“Several science instruments are equipped to measure Ganymede’s neutral gas environment and particularly the H2O abundance by remote sensing of UV, optical, infrared and submillimetre emissions, as well as in situ sensing with the neutral particle detector,” the authors explain in their paper.

“Our results place observational constraints on the contribution of sublimation to the atmosphere, and provide the JUICE instrument teams with valuable information that may be used to refine their observation plans.”

Originally published by Cosmos as Water in Ganymede’s atmosphere