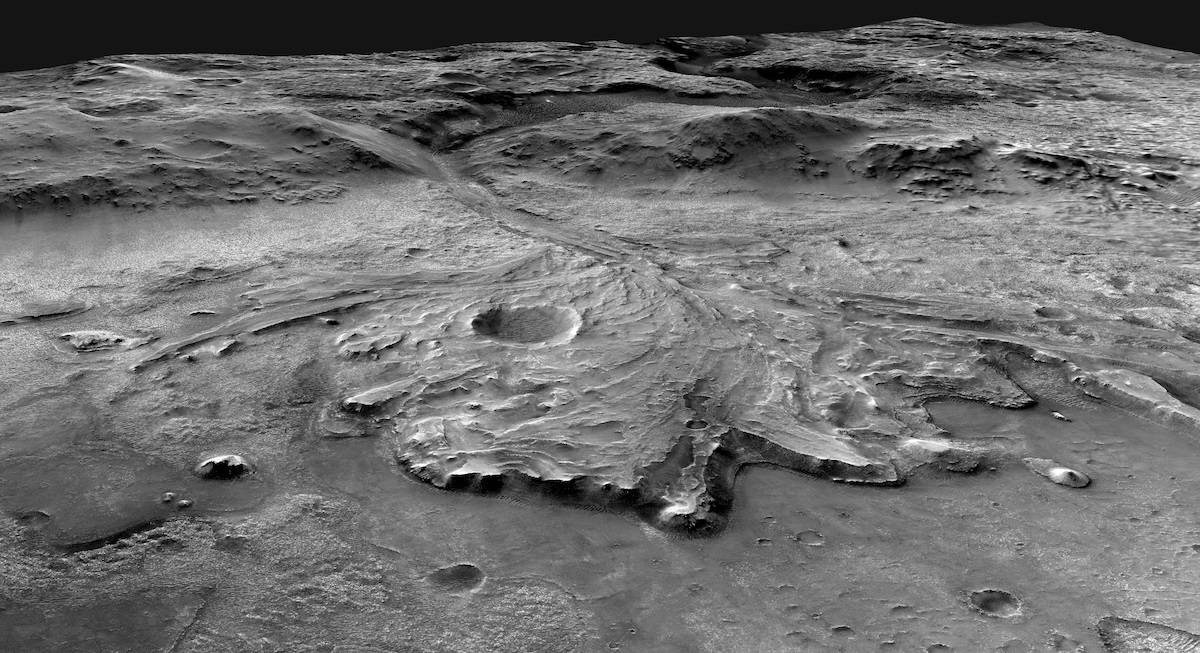 The Mars 2020 spacecraft will carry the same image mosaic as was used to generate this oblique image looking west from above the Jezero Crater floor, over the fan-shaped delta deposit, and into the valley that cuts through the crater rim. Credit: NASA/MSSS/USGS
More on:
Mars 2020

A long trip needs a good map. Just to be safe, the US Geological Survey’s Astrogeology Science Centre has created two for NASA’s Perseverance rover when it heads for Mars in a matter of days (check the mission status here).

They’re not to get it to the Red Planet; NASA has done that before. They’re to get it down safely, in the right place – Jezero Crater – and going about its business.

“As much as we would love to manually steer the spacecraft as it lands, that’s just not possible,” says USGS’s Robin Fergason. “Mars is so far away… that it takes several minutes for radio signals to travel between Mars and Earth. By using the maps we created, the spacecraft will be able to safely steer itself instead.”

The first is a high-resolution (25 centimetres per pixel) map used to show surface hazards at the landing site. This will serve as the base map for mission operations and to plot where the rover will explore after landing.

The second is a lower resolution (six metres per pixel) map that spans the landing site and much of the surrounding terrain. This will be used onboard the spacecraft, along with the locations of the hazards from the high-resolution map, to help it land safely using a technology called Terrain Relative Navigation.

The maps have been aligned to each other and to global maps of Mars with unprecedented precision, NASA says. They are based on images collected by the Mars Reconnaissance Orbiter’s Context Camera and the High-Resolution Imaging Science Experiment (HiRISE) camera and available here.

Also on board is the Mars Science Laboratory Entry, Descent, and Landing Instrumentation 2 (MEDLI2) sensor suite, which will gather data during the journey through the Martian atmosphere.

And NASA promises we won’t miss a thing. The rover and other parts of the spacecraft will carry 23 cameras – more than any previous interplanetary mission – and engineers will put together a high-definition view of the landing on 18 February next year.

Jezero Crater is 45 kilometres wide and sits on the western edge of Isidis Planitia, a giant basin just north of the Martian equator dug out long ago when a space rock hit the surface.

“The science team has had many discussions internally and externally about where the next Mars rover should go,” says Ken Farley, the mission’s project scientist. “We ultimately chose Jezero Crater because it is such a promising location for finding organic molecules and other potential signs of microbial life.”

To date Mars orbiters have been able to collect images and data from the crater from about 320 kilometres above, but finding signs of ancient life on the surface requires much closer inspection.

The rover will land near the delta shown in the image above. Deltas form when flowing water is slowed by encountering standing water, causing sediment to be deposited. On Earth, deltas are excellent at concentrating and preserving evidence of life, making this delta on Mars an appealing target.

Originally published by Cosmos as Travel with maps and Perseverance