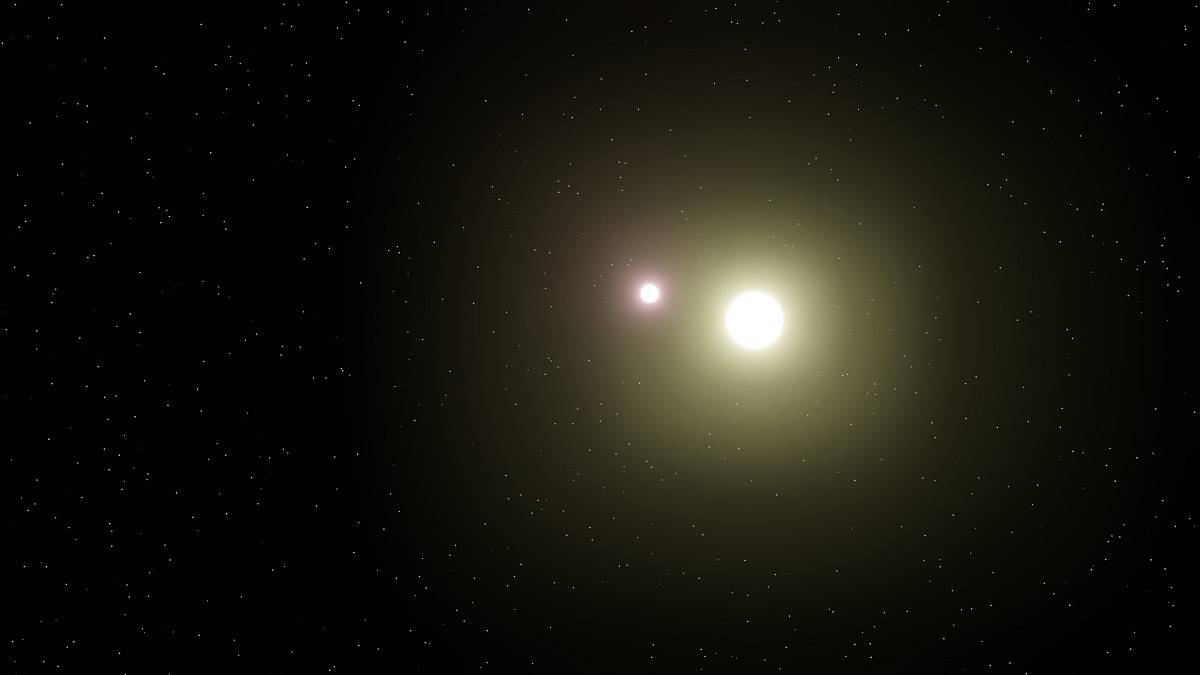 A 3D rendering of a binary system including a red star and a yellow star. Credit: Chartchai Sansaneeyashewin / iStock / Getty Images Plus.
More on:
astronomy

Around half the stars in the universe come in binary systems, like the famous two suns on Tatooine in Star Wars. These pairs of stars orbit each other very tightly, but the laws of physics make this arrangement very improbable.

A new discovery of a young binary star system made by astronomers at the Australian National University (ANU) backs up one theory of how they come about.

The findings are presented in a paper published in the Monthly Notices of the Royal Astronomical Society.

We know quite a bit about the birth and evolution of single stars. They are comparatively simple to study and understand. But binary star systems just don’t make a lot of immediate sense. There have long been debates among astronomers about how they are formed.

“You just need to imagine how you form a star,” says co-author of the study and associate professor at ANU Christian Wolf. “A star like our Sun is formed from a big cloud of gas which has collapsed in on itself and became an ever-denser ball of gas. When it is small and concentrated enough, it gets hot enough to start firing up its fusion engine to be a star.”

Listen: How big is the Sun? An exercise in really big numbers

So, to form two stars, you need two balls of gas side by side.

“If you let each one collapse to its centre, they are necessarily going to be separated by the size of the original cloud,” explains Wolf.

“If you wanted to form a tight binary, as those two clouds collapsed towards their respective centres, they would actually have to move towards each other at the same time until the two stars that form from the clouds are really close. And then suddenly stop moving towards each other. That would be a really contrived and actually impossible scenario.”

Instead, astronomers have theorised that binary systems must form when some material envelopes two stars, causing them to slow down through friction. This speculated material is referred to as the “common envelope” (CE).

“If we imagine Jupiter to be not a planet but a small companion star to the Sun, how would we bring Jupiter into orbit somewhere close to the sun?” he asks. “You need some sort of friction that slows down Jupiter and lets it drift closer to the sun. If you imagine the solar system not filled with empty space, but let’s say with honey, all the planets would massively be slow down, ploughing their ways through viscous fluid. And as they slow down, they would lose that centrifugal force that normally keeps them in their orbit and the Sun’s gravity would pull them closer in. So, in the common envelope, that’s really what happens. It’s a mass of material and you get that friction that slows down the orbits and therefore pulls them in more tightly.”

Okay, sure. But, last we checked, the universe is not filled with honey. So, where does the material that makes up the common envelope come from?

“In the early stages, two stars often circle around each other with nothing much happening,” Wolf says. “But when one of the stars grows into a red giant, it doesn’t just claim more empty space the way a single star will do. Instead, it ‘embraces’ or engulfs its companion, and they appear as one star under an opaque envelope. That’s when things get really exciting. The friction of their motion inside the envelope profoundly alters what happens next for the stars. It not only causes heat but slows down the stars, so they spiral into an ever-tighter orbit; the envelope finally overheats and gets blown away.”

Wolf and his team came across the first glimpse of what might be two stars involved in this “common envelop” phase largely by accident.

Using data from the SkyMapper telescope at Siding Spring Observatory in NSW, Wolf’s team were actually looking for a rare type of star called a Blue Large Amplitude Pulsator, or BLAP. While a BLAP was found, something else in the data puzzled them.

Collaborating with researchers at China’s Yunnan Observatory, the team ran a spectral analysis and found unexpected absorption due to the presence of calcium in the system. The scientists believe they have found the first evidence of a common envelope – one that was ejected only 10,000 years ago.

Wolf tells Cosmos that the estimated timeframe comes from knowing the velocity of the expanding shell and its density. From that, the team could extrapolate the age of the common envelope.

Most binary star systems are discovered millions or even billions of years after their common envelope would have been shed. To find one so soon after the event gives important insight into the early evolution of these systems.

“The common envelope phase is a missing link in the very long and complex chain of events making up the life of stars. Now we are starting to fix that link,” Wolf adds. “It could even help us better reconstruct gravitational wave events, such as black hole mergers.”

One problem with observing binary systems near the common envelope phase is that it is a relatively short part of their evolution.

But Wolf thinks they may be more common than we think. Wolf’s collaborators in Yunnan have already found indications of similar calcium-absorption lines in separate data.

“At the time, they said, ‘let’s avoid this stuff because we don’t know how to deal with this’. Who knows? Maybe those previously discarded spectra are actually such examples. Now we have to go back and verify that it really is that or whether it’s something completely different.

“We just have to find many ideally tight binaries in that moment in which they are coming out of the CE phase so that we see how they are born,” says Wolf. “After that the evolution then will make more sense. It may be easier to recognise them now we have a clearer idea of what to look for. There may be others that have been under our nose the whole time.”