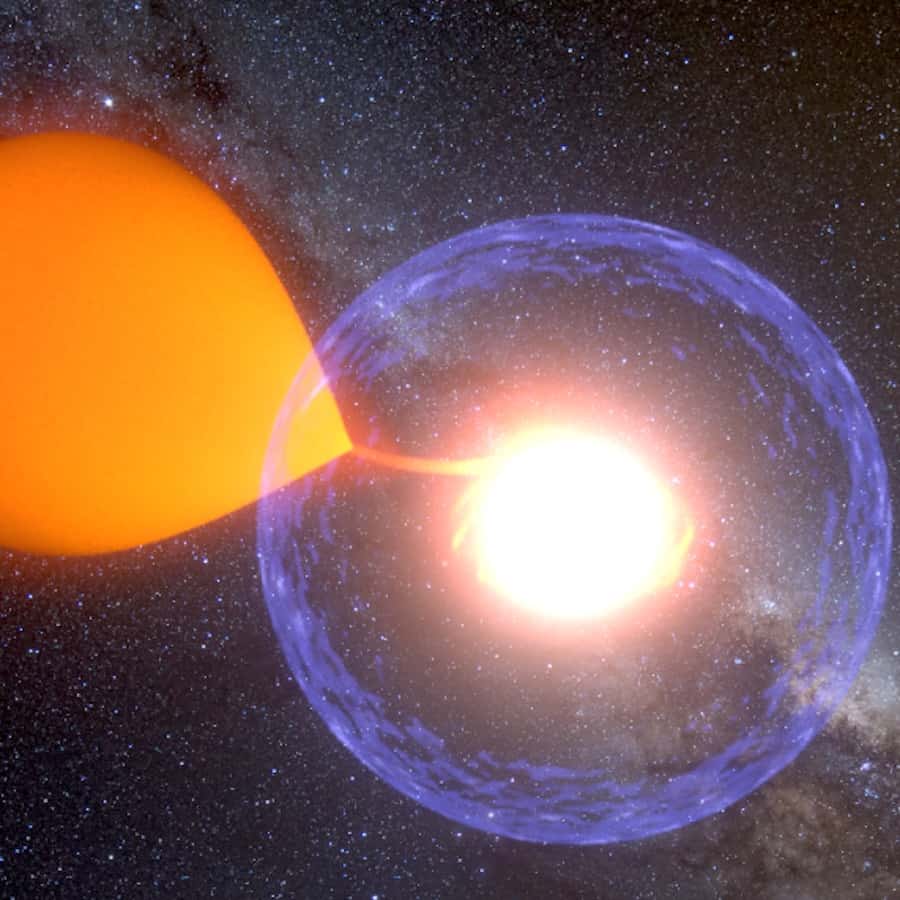 A white dwarf star that had been nibbling at a companion star has been caught gorging itself and exploding in a bright blast.

Astronomers in Poland, the US and the UK report their binary star, called a classical nova, in Nature. It provides a view into how classical novae unfold and dial down.

Not to be confused with supernovae – where massive stars, in their death throes, explode in a cataclysmic blast – classical novae are less violent but no less curious.

As a white dwarf star – the old, dense, hot core of a star that’s exhausted its nuclear fuel – drags matter off a companion star, it glows a little.

Occasionally, a clump of matter will be dumped onto the white dwarf all at once, causing a brief brightening called a dwarf nova outburst.

If the clump is big enough, it can trigger runaway thermonuclear reactions on the white dwarf’s surface – leading to a gigantic explosion that boosts the star system’s brightness ten thousand-fold. Those mammoth bursts are thought to recur on timescales of ten thousand to a million years.

Przemek Mróz from the Warsaw University Observatory and colleagues reported this cycle in a classical nova they’d been watching for 13 years.

The star system V1213 Cen is a classical nova. Located in the Centaurus constellation, the pair was periodically monitored since 2003 by the Optical Gravitational Lensing Experiment, a project based at the University of Warsaw, using the Las Campanas Observatory in Chile.

For the first six years of observation, they saw dwarf nova outbursts every two to four weeks, indicating minor matter dumps onto the white dwarf.

But then, in May 2009 – with six days of an outburst – the classical nova erupted, burping out an immense blast of radiation. Did that outburst six days prior have anything to do with the main explosion? It’s tempting to think so, Mróz and colleagues write, but without data to fill in the blanks between the two events it’s not possible to say for sure.

After the blast, the system faded slowly from 2010 to 2016. It’s still around two orders of magnitude brighter now than before the blast, but dwarf outbursts have ceased.

This, the researchers write, means the big blast dragged a particularly large amount of mass from the companion star, which they think has a mass around half that of the sun.

They think the system will continue to ever-so-slowly dim for the next few decades, then settle back into its dwarf nova state with periodic outbursts until the process starts again.