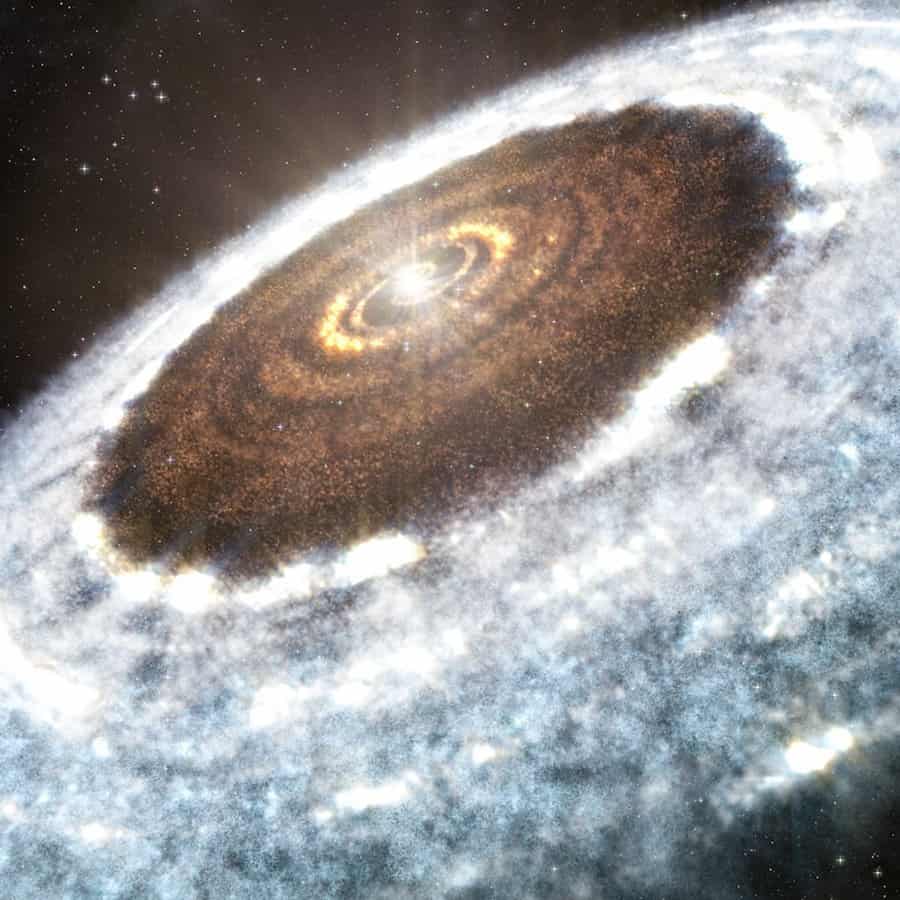 as detected with ALMA.

A young flaring star has vapourised water crystals in its surrounding disc of gas and dust out to a distance of six billion kilometres, outlining the boundary between water ice and vapour in a baby solar system for the first time.

In a paper published in Nature, Lucas Cleza from Diego Portales University in Chile and colleagues from Australia, Chile, the Netherlands and US measured the distant “snow line” surrounding the star V883 Orionis using the Atacama Large Millimetre/Submillimetre Array (ALMA) – a feat only possible thanks to the star’s flash, which pushed the snow line to a measurable distance.

Water ice regulates clumping of dust grains so is fundamental to the birth of comets, ice giants and the massive cores thought to reside in gas giants.

Baby stars – called protostars – are sheathed by a disc of leftover gas and dust from their own formation. And because protostars tend to be relatively dull and cool – they’re yet to reach full nuclear fusion capacity – most of that disc contains vast reservoirs of water ice.

This is the case for V883 Orionis. At least, it was, until a bit of that gassy disc fell onto the star, causing it to brighten and heat its surrounds.

Even though it’s only around a third more massive than our sun, it’s 400 times brighter.

In our solar system, that’s the farther than the average distance between the sun and Pluto.

At V883 Orionis’ distance, around 1,350 light-years away, the ALMA’s resolution is around 12 astronomical units – nowhere near fine enough to distinguish the snow line from the star before the flare-up.

But after the burst of heat and light, the telescopes could make out “what looks like a ring at 40 astronomical units”, Cieza says.

The discovery was a complete surprise. Cieza and colleagues were looking for evidence of the disc breaking up, which might trigger planet formation. Instead, they found “exciting results, even if they are not the ones we were looking for”.