Home ■ Space ■ Space Exploration ■ So long Spitzer, thanks for all the information 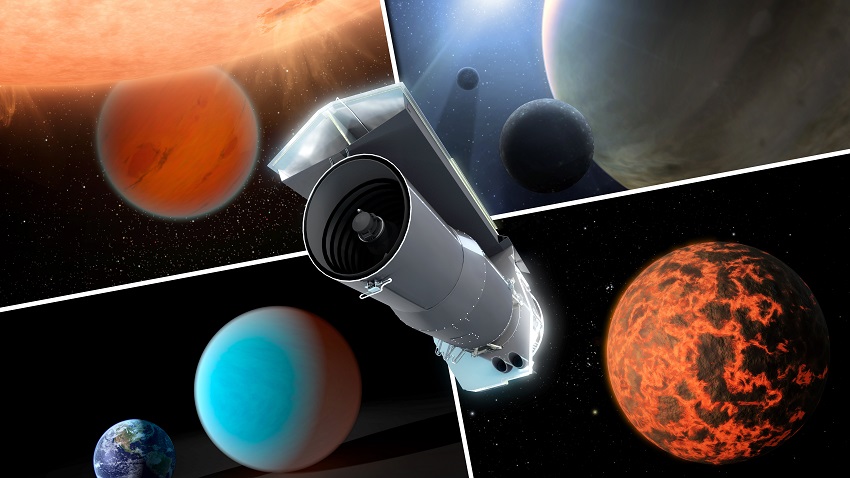 An artist's concept of Spitzer surrounded by examples of exoplanets it has examined. Credit: NASA/JPL-Caltech

NASA’s aging Spitzer Space Telescope, which has been using infrared light to study the cosmos for more than 16 years, will be formally retired today (30 January).

Infrared light is light at wavelengths too long to be seen by the human eye. It is emitted by warm (or sort-of-warm) objects in much the same way visible light is emitted by white-hot ones.

But in addition to being invisible to the human eye, it does not readily make its way through the Earth’s atmosphere.

Furthermore, infrared light from distant astronomical objects can easily be overwhelmed by stronger infrared radiation from nearby objects, including the telescope itself.

For this reason, from its launch in 2003, until it ran out of liquid-helium coolant in 2009, Spitzer was designed to be chilled to 5 degrees Kelvin (-268 degrees Celsius), so that its own thermal emissions didn’t obscure the information it was seeking.

Since then, it’s been working in “warm mode,” without the benefit of liquid helium, though “warm” is a bit of a misnomer. Even without coolant, Spitzer’s is designed to radiate enough heat away into space that its gold-plated beryllium mirror still won’t exceed a temperature of about 29 degrees K, or –244 degrees C.

That limits its ability to detect extremely long-wavelength infrared radiation, but still allows it to detect wavelengths as long as 4.5 to 4.6 microns, says Bill Latter, NASA’s program scientist for the mission. That’s several times longer than the longest visible-light wavelength detectable by the human eye.

Peering at the Universe in these wavelengths, he says, is important because they are common in the light reaching us from certain types of objects.

For example, Latter says, Spitzer has been able to study the most distant galaxy currently known, an object called GN-z11, whose light has been travelling to us since the Universe was only 400 million years old – in other words, only 3% of its current age.

That’s long enough that what was once visible light has been stretched far into the infrared by the continued expansion of the Universe.

“It’s the oldest thing ever seen,” Latter says, adding: “By many cosmological models, it formed too early, so there are a lot of things about it that need to be understood.”

Closer to hand, Spitzer has discovered that the interstellar medium is filled with complex organic molecules, including multi-ring structures called polycyclic aromatic hydrocarbons, plus soccer-ball-shaped molecules known as buckminsterfullerene, or buckyballs.

The former, Latter says, are things “you don’t want to mess with” on Earth because they are very carcinogenic. “But they are possible precursors to life, [and] Spitzer found them everywhere we looked.” Buckyballs, he adds, are another potentially important precursor for life.

Spitzer also proved useful for studying exoplanets, such as those in the TRAPPIST-1 system, a compact planetary system circling a red dwarf star, 39.6 light years away in the constellation Aquarius.

Although Spitzer wasn’t the first to find planets in TRAPPIST-1, it eventually upped the tally to seven of them, well placed to possibly have water. “It changed the science of exoplanets and gave us something akin to our own Solar System,” Latter says.

And these finds only begin the list of Spitzer’s greatest hits. “It’s hard to pick,” Latter says. “You’ll get different answers from different scientists.”

But all good things eventually come to an end.

“NASA does not shut off a facility like this without a lot of thought,” Latter says, but “we do review our missions to make sure the taxpayer is getting the best return.”

In this case, Spitzer, which costs about $US12.2 million dollars a year in operating costs, is facing two problems.

One is that it is soon to be eclipsed by the James Webb Space Telescope, currently scheduled for launch in March of 2021. {%recommended 9670%}

The other is that it was deployed into an “Earth-trailing” orbit that allowed it to slowly drift away from our own planet.

The goal was to keep it away from interference from infrared light emitted by the Earth. But it’s slowly drifted farther and farther away, until now it’s 265 million kilometres behind us.

That, Latter says, makes it harder and harder for scientists to keep its solar panels pointed toward the Sun, while also keeping its radio antennas pointed toward Earth.

“It’s a geometry problem,” he says. Eventually, he says, it would become impossible to control the telescope. “It’s better to shut it down elegantly than to just let it go out of control.”

To its dying day, however, Spitzer has continued to make important observations.

Recently, it confirmed that one of the first planets found by NASA’s new planet-hunting TESS space telescope, TOI-700d, is indeed TESS’s first find of an Earth-sized world in the habitable zone of a distant star (TOI means TESS Object of Interest).

What this means, says Joey Rodriguez, an astronomer at the Harvard-Smithsonian Center for Astrophysics, US, who presented the result earlier this month at a meeting of the American Astronomical Society, is that even with its “last gasp” Spitzer was able to confirm “one of the most interesting planets to date from the TESS mission”.

“It may be one of the last big discoveries Spitzer makes, and that’s testimony to its legacy,” he says. “It was an incredible, unique facility that did a lot of great science. It will be missed.”