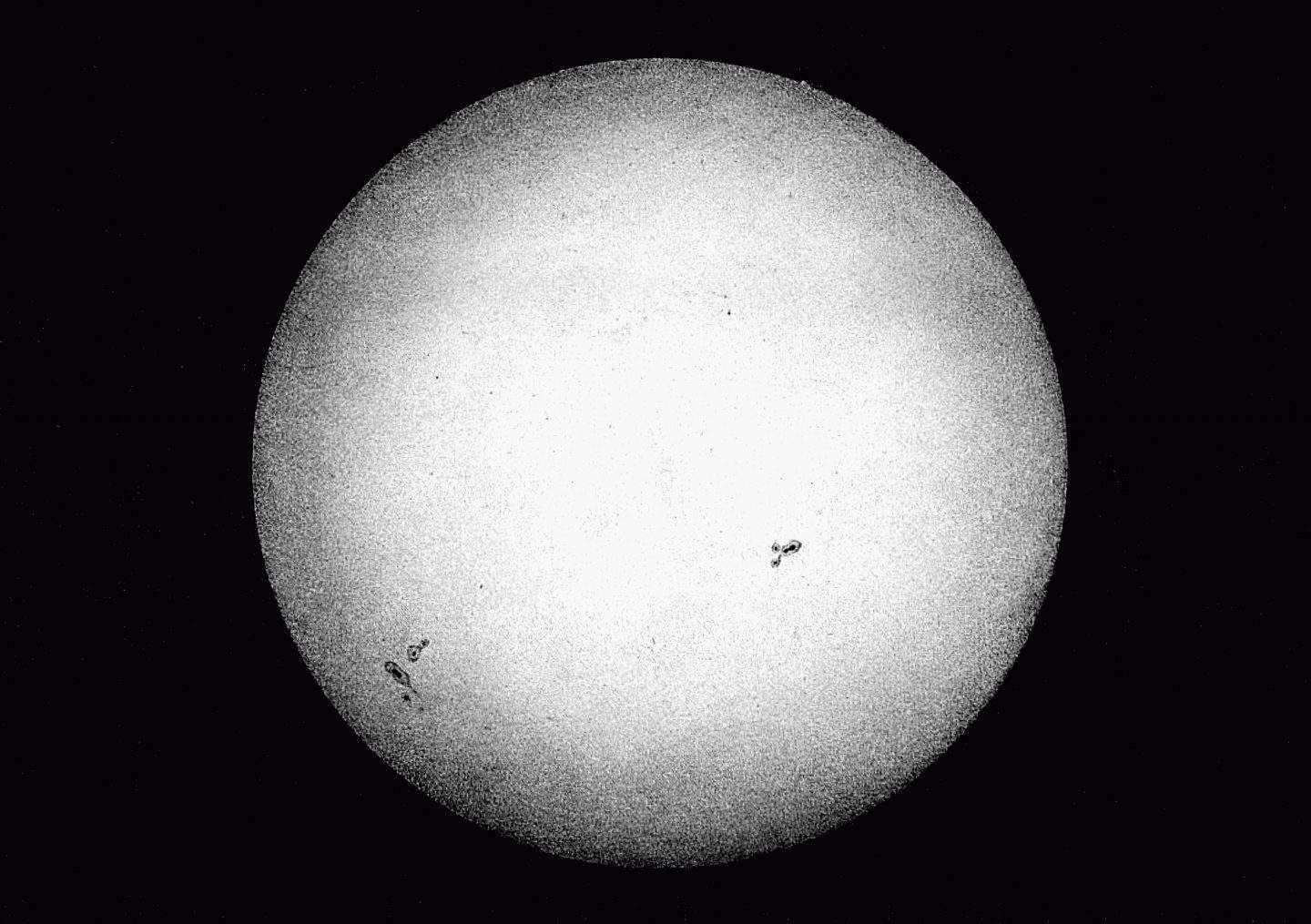 taken by Hippolyte Fizeau and Léon Foucault on 2 April 1845.

Humans have worshipped the Sun throughout all of recorded history and began to study it systematically as early as the 8th century BC, when the Babylonians took note of solar eclipses.

But it’s difficult to observe a blazing fireball in the sky. Today, advanced imaging techniques and dedicated spacecraft have made it possible to get up close and personal with our celestial neighbour — and it all began on a spring day in 1845.

The oldest surviving picture of the Sun was snapped on April 2 1845 by French physicists Hippolyte Fizeau and Léon Foucault. The image was a daguerreotype: Fizeau and Foucault treated a metal plate with chemical fumes to make it light-sensitive, exposed it for 1/60th of a second to the Sun’s brilliant disk, then treated it with a liquid chemical to “freeze” the image.

It was only 20 years since French inventor Nicéphore Niépce had pointed a primitive camera at the French countryside and taken the first ever photograph. Fizeau and Foucault’s black-and-white image was a major technological feat and remains an important scientific advance, revealing what our unaided eyes can’t see: the Sun’s sharp edges and grainy surface dotted with sunspots.

Over the following decades, photography revealed the Sun as a dynamic, blazing world.

On July 28 1851 at the Royal Observatory in Königsberg, Prussia (now Kaliningrad, Russia), Johann Julius Friedrich Berkowski took the first photo of a solar eclipse, capturing the Sun’s outer atmosphere — the corona — for the first time. Just a few years later, in 1858, British scientist Warren de la Rue and French astronomer Jules Janssen began taking daily photographic records of sunspots; de la Rue went on to record the whole 11-year solar cycle in almost 3000 images. In 1870 US astronomer Charles A. Young snapped the first image of a solar prominence — a stream of gas reaching out from the Sun’s disk.

As technology improved, solar observatories sprung up around the world, although some of the most influential research was done in the field. In 1919 British astronomer Arthur Eddington travelled to a small island off the west coast of Africa to image a total solar eclipse, thus validating the predictions of general relativity and catapulting Einstein to fame.

Later in the century, the space age opened up a wealth of new opportunities to study the Sun. In the 1970s, NASA’s Skylab Space Station captured images of the Sun in X-ray wavelengths for the first time, showing solar flares, active regions and entirely novel features like coronal holes — cooler, darker parts of the Sun’s corona.

A suite of Sun-gazing spacecraft were launched over the next decades, including the Solar and Heliospheric Observatory, which investigates the Sun’s outer layers in wavelengths from the optical to the extreme ultraviolet; RHESSI, which photographs the Sun in X-rays; the two STEREO spacecraft, which keep an eye on violent eruptions; Japan’s Hinode spacecraft, which studies the Sun’s magnetic fields; and the Picard satellite, which took more than a million pictures of the Sun from 2010 to 2014.

Since 2010, NASA’s Solar Dynamics Observatory has been studying the influence of the Sun on the Earth, continuously snapping high-res views of its atmosphere and producing incredible amounts of data.{%recommended 6974%}

These spacecraft have given us dazzling up-close images of solar filaments, X-ray jets, arcs of plasma, and other phenomena that Fizeau and Foucault could never have dreamed of.

And it doesn’t end there: NASA’s Parker Solar Probe is slated to launch this year and is on a mission to literally touch the Sun, making the closest ever observations of star with the most advanced imaging technology yet.

Despite these ambitious missions, the development Fizeau and Foucault might find most impressive is how — armed with the proper filters — anyone with a smartphone or off-the-shelf camera can now change their own perspective of our star.

Originally published by Cosmos as Snapshots of the Sun