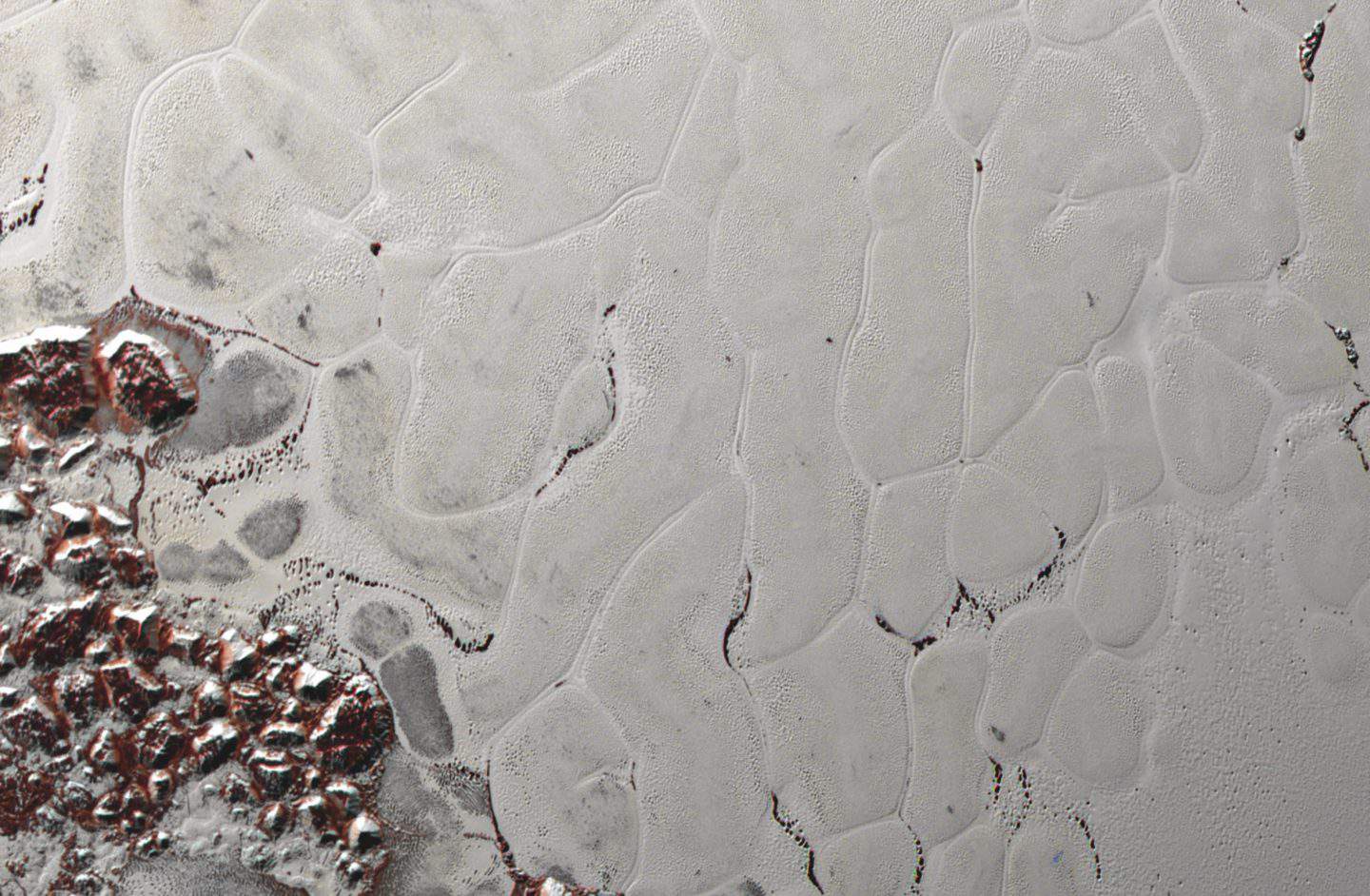 The shapes tiling the surface of Pluto’s heart-shaped patch are produced by fresh nitrogen ice churning up from beneath, two US studies published today in Nature suggest.

Teams led by Purdue University’s Alexander Trowbridge and another by William McKinnnon from Washington University in St Louis used observations and data from NASA spacecraft New Horizons’ flyby of the dwarf planet last year combined with mathematical modelling to show convection from below continually rejuvenates the ice layers.

When New Horizons zoomed by Pluto in July last year, it sent back images of a vast, oval basin around 1,200 kilometres wide – bigger than Texas and Oklahoma combined – in the dwarf planet’s heart-shaped region Tombaugh Regio.

The central part of each cell rose tens of metres above its edges. But how the plain, nicknamed “Sputnik Planum”, became tiled with these irregular shapes was a mystery. Did the cells form when the icy surface cracked and contracted, like drying mud? Or did they crop up as warmer ice rose from below?

McKinnon, Trowbridge and their teams thought the relatively smooth surface pointed to the latter. An old surface would be pockmarked with craters, so Sputnik Planum probably turned over fairly regularly.

So like the blobs in a lava lamp, warmer nitrogen ice, holed up in a kilometres-thick reservoir beneath Sputnik Planum, could rise and form the tiled surface we see today. And as surface ice cooled, it would sink beneath the surface.

Trowbridge’s team came to the same conclusion. If the contraction theory were true, they add, New Horizons should have picked up brittle deformities in the nitrogen ice layer. They are, however, lacking.

They also calculated the cells grow in height around 1.5 centimetres per year – about the same rate as your fingernails. While this sounds slow, on a geological scale it’s “vigorously convecting”, they write. This puts the surface’s age at only around a million years or so.

Similar convective process could also be found on other dwarf planets in the frozen reaches of the Solar System, McKinnon writes.

The papers don’t agree on everything, though.

How nitrogen ice reservoirs collected at Sputnik Planum in the first place is still up for debate, write the University of Illinois at Chicago’s Andrew Dombard and Sean O’Hara in a News and Views article: “Was it for climatological reasons, as Trowbridge and co-workers speculate, or for glaciological reasons, as McKinnon et al suggest?”