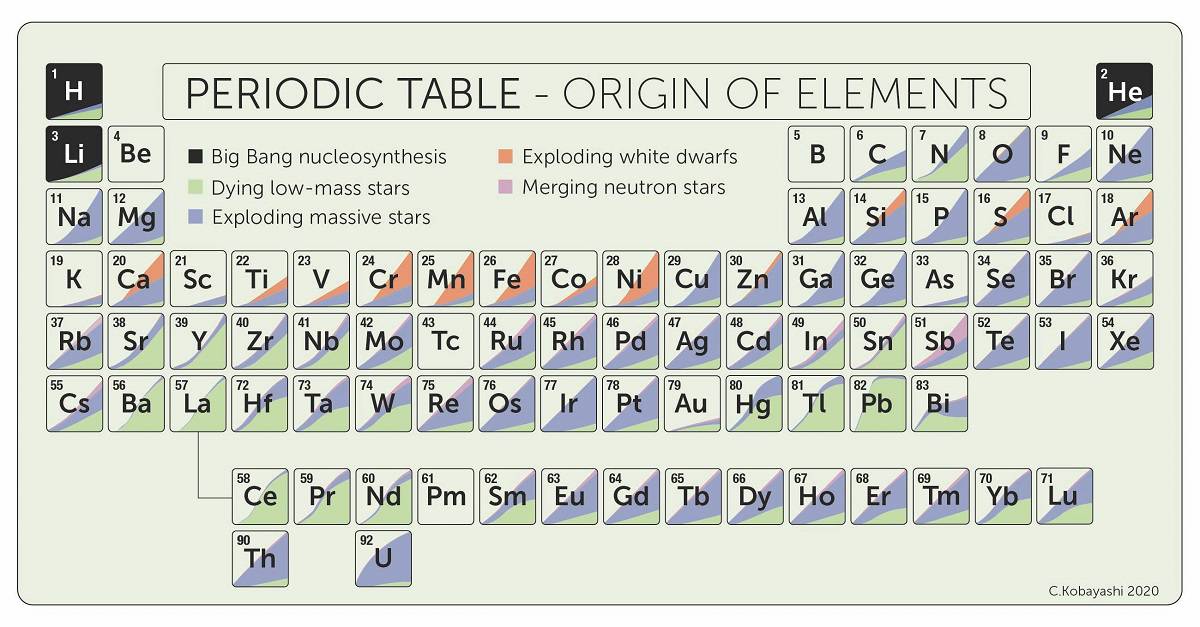 Colliding neutron stars do not create as many of the chemical elements in the Universe as has been assumed, according to a new study.

Another stellar process is responsible for making most of the heavy ones, a trio of astronomers writes in a paper in The Astrophysical Journal, and that will change the accepted model of how the Universe evolved.

“Neutron star mergers did not produce enough heavy elements in the early life of the Universe, and they still don’t now, 14 billion years later,” says Amanda Karakas, from Australia’s ARC Centre of Excellence for All Sky Astrophysics in 3 Dimensions (ASTRO 3D).

“The Universe didn’t make them fast enough to account for their presence in very ancient stars, and, overall, there are simply not enough collisions going on to account for the abundance of these elements around today.”

All hydrogen and a lot of helium and lithium were created by the Big Bang, but other naturally occurring elements are made by different nuclear processes inside stars.

Half of those that are heavier than iron are thought to be made when neutron stars, the superdense remains of burnt-out suns, crash into one another.

However, the new study suggests that heavy elements are created by unusual supernovae that collapse while spinning very fast and generating strong magnetic fields.

The researchers do concede, however, that future research may find that neutron star collisions are more frequent than the evidence so far suggests, in which case their contribution might be revised upwards again.

The study is the first to attempt to calculate the stellar origins of all naturally occurring elements from first principles, and even produced a new-look Periodic Table, showing the origins of elements from carbon to uranium.

The co-authors are Chiaki Kobayashi, from the University of Hertfordshire, UK, and Maria Lugaro, from Hungary’s Konkoly Observatory and Australia’s Monash University.

The researchers say their work refines previous studies that calculate the relative roles of star mass, age and arrangement in the production of elements.

They established, for example, that stars smaller than about eight times the mass of the Sun produce carbon, nitrogen and fluorine, as well as half of all the elements heavier than iron.

Massive stars over about eight times the Sun’s mass that also explode as supernovae at the end of their lives produce many of the elements from carbon through to iron, including most of the oxygen and calcium needed for life.

“Apart from hydrogen, there is no single element that can be formed only by one type of star,” says Kobayashi.

Pairs of massive stars bound by gravity, in contrast, can transform into neutron stars. When these smash into each other, the impact produces some of the heaviest elements found in nature, including gold. On the new modelling, however, the numbers simply don’t add up.

“Even the most optimistic estimates of neutron star collision frequency simply can’t account for the sheer abundance of these elements in the Universe,” says Karakas. “This was a surprise. It looks like spinning supernovae with strong magnetic fields are the real source of most of these elements.”

Originally published by Cosmos as Origin of the elements reviewed