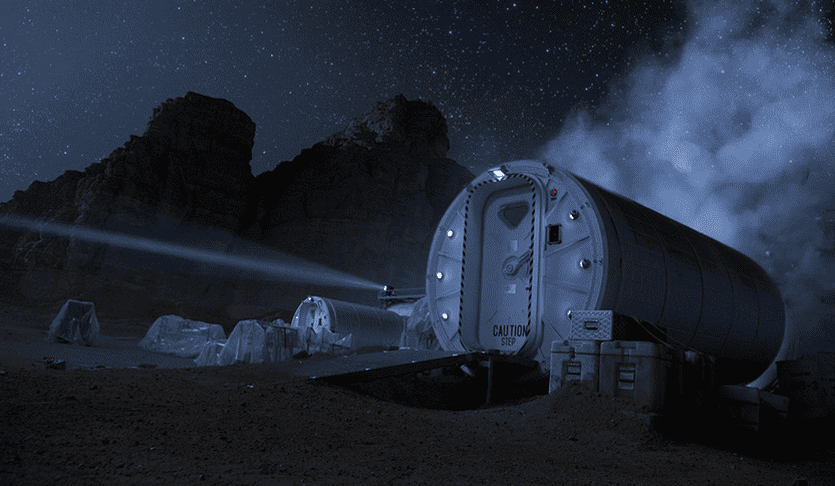 To mark the release of The Martian, a movie about an astronaut marooned on Mars where only science and innovation can save his life long enough for an unlikely rescue attempt to be made, NASA has listed the nine technologies in the movie that already exist in the real space program. We have listed them below.

You can read the Cosmos review of the book on which the movie is based here.

Protecting astronauts from the harsh Martian environment is top of the list and NASA is on the case. At NASA Johnson Space Center, crews train for long-duration deep space missions in the Human Exploration Research Analog (HERA).  The two-story habitat is complete with living quarters, workspaces, a hygiene module and a simulated airlock.

NASA ticked that box this month with International Space Station astronauts consuming their first crop of the “Outredgeous” variety of red romaine lettuce. It was first grown back in 2014, but that crop was designated for testing to make sure it was safe to eat.

It would be essential to grow food on Mars as resupply from Earth would be impossible.

Although there was ample evidence of a watery past on Mars, there is no H2O there today. Initially astronauts would have to take their own, but resupply from Earth, taking more than nine months, would be impossible so anyone living on the surface of the Red Planet would have to make sure they can supply themselves and recycle what they have.

In the movie, the crew does not waste a drop and the hero Mark Watney comes up with inventive ways to solve the problem.

NASA has already been there.

On the International Space Station, no drop of sweat, tears, or even urine goes to waste. The Environmental Control and Life Support System recovers and recycles water from everywhere: urine, hand washing, oral hygiene, and other sources. Through the Water Recovery System (WRS), water is reclaimed and filtered, ready for consumption. One astronaut simply put it, “Yesterday’s coffee turns into tomorrow’s coffee.”

In the movie’s “Hab” breathable air is supplied by the “oxygenator,” a system that generates oxygen using the carbon dioxide from the MAV (Mars Ascent Vehicle) fuel generator.

The International Space Station’s equivalent is the Oxygen Generation System, which reprocesses the atmosphere of the spacecraft to continuously provide breathable air. It uses electrolysis, which splits water molecules into their component oxygen and hydrogen atoms.

The oxygen is released into the atmosphere, while the hydrogen is either discarded into space or fed into the Sabatier System, which creates water from the remaining byproducts in the station’s atmosphere.

OK, a spacesuit specifically made to protect astronauts on the surface of Mars isn’t quite perfected yet, but NASA is working on it.

The Z-2 and Prototype eXploration Suit, NASA’s new prototype spacesuits, help solve unique problems to advance new technologies that will one day be used in a suit worn by the first humans to set foot on Mars. Each suit is meant to identify different technology gaps – features a spacesuit may be missing – to complete a mission. Spacesuit engineers explore the tradeoff between hard composite materials and fabrics to find a nice balance between durability and flexibility.

One of the biggest challenges of walking on Mars, NASA says, will be dealing with dust.

While the rover Curiosity has been captivating us with its travels across the Martian surface, humans are going to need a more robust transport system and NASA is working on it with the prototype, the Multi-Mission Space Exploration Vehicle (MMSEV). It is every bit as futuristic as the rover from the movie.

The unlikely technology that powers NASA’s Dawn spacecraft that has visited asteroids Vesta and Ceres. NASA’s Evolutionary Xenon Thruster (NEXT) Project that has developed a 7-kilowatt ion thruster is the next generation.

In “The Martian,” the Hermes spacecraft also uses ion propulsion that works by electrically charging a gas such as argon or xenon and pushing out the ions at speeds of about 320,000 k/hr.

The spacecraft experiences a force similar to that of a gentle breeze, but by continuously accelerating for several years, celestial vessels can reach phenomenal speeds. Ion propulsion also allows the spacecraft to change its orbit multiple times, then break away and head for another distant world.

Solar is already powering the ISS. Four sets of solar arrays generate 84 to 120 kilowatts of electricity – enough to power more than 40 homes – and solar will power Orion, NASA’s spacecraft for a Mars mission.

The arrays can gather power while in sunlight to charge onboard lithium-ion batteries. In case no sunlight is available – for instance, if Orion were to go behind the Moon – there would still be plenty of power to allow it to operate.

NASA has been using Radioisotope Thermoelectric Generators (RTGs) to provide electrical power since the Apollo missions to the Moon. Spacecraft such as the Mars rover Curiosity use an updated version. RTGs are “space batteries” that convert heat from the natural radioactive decay of plutonium-238 into reliable electrical power.

Such as system powered New Horizon’s fly-by of Pluto and the Cassini mission – although scientists are currently grappling with the looming problem of a shortage of plutonium-238.