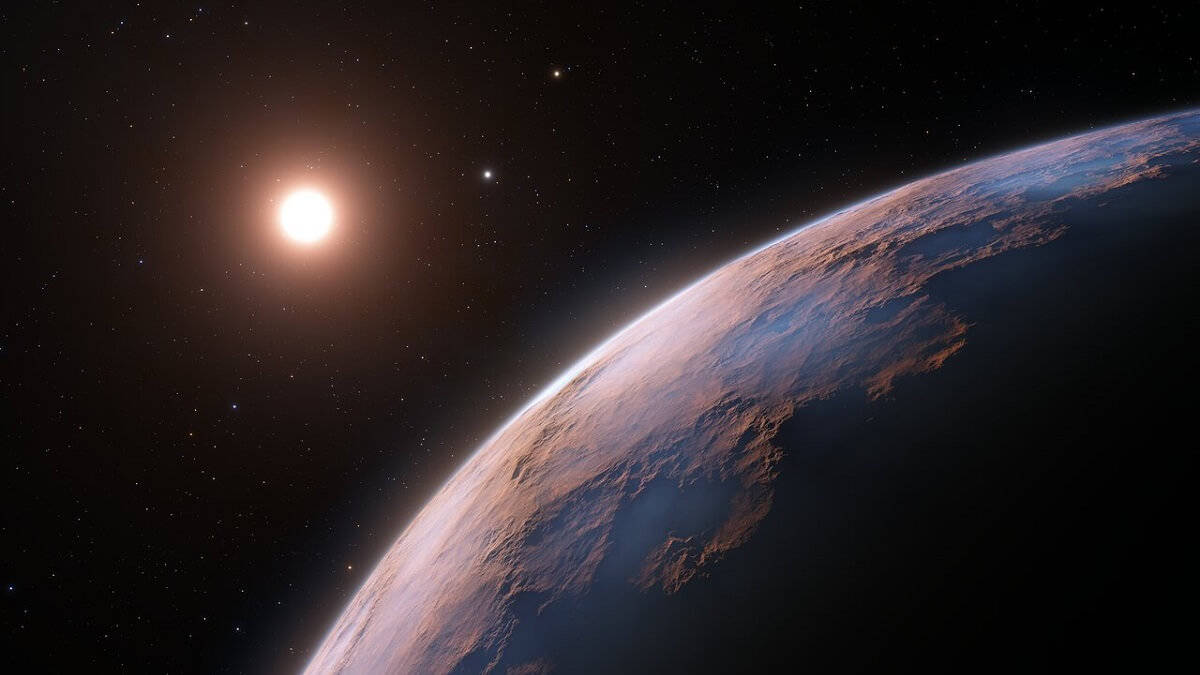 This artist’s impression shows a close-up view of Proxima d, a planet candidate recently found orbiting the red dwarf star Proxima Centauri, the closest star to the Solar System. The planet is believed to be rocky and to have a mass about a quarter that of Earth. Two other planets known to orbit Proxima Centauri are visible in the image too: Proxima b, a planet with about the same mass as Earth that orbits the star every 11 days and is within the habitable zone, and candidate Proxima c, which is on a longer five-year orbit around the star. Credit: ESO/L. Calçada
More on:
astronomy discovery

A team of astronomers has welcomed a new exoplanet to our celestial neighbourhood, finding evidence of a third planet orbiting Proxima Centauri, the closest star to our solar system.

Documenting their discovery in Astronomy & Astrophysics, the researchers enthuse that discoveries such as this are reminders that there are many new and wonderful things waiting to be discovered in our night skies.

“The discovery shows that our closest stellar neighbour seems to be packed with interesting new worlds, within reach of further study and future exploration,” says lead author João Faria, a researcher at the Instituto de Astrofísica e Ciências do Espaço, Portugal.

The newly discovered planet, dubbed Proxima d, is remarkably light and speedy, weighing in at just one quarter of Earth’s mass and taking a mere five days to complete its orbit around Proxima Centauri. It orbits approximately four million kilometres from the star, which is less than a tenth of Mercury’s distance from our sun, placing it too close to be in the habitable zone where a planet can host liquid water at its surface.

The planet has two known celestial siblings that also orbit Proxima Centauri: Proxima b, a planet with a mass comparable to that of Earth that orbits the star every 11 days and lies within the habitable zone; and candidate Proxima c, which is on a longer five-year orbit.

The planet is so small that it is remarkable astronomers were able to find it. It was discovered using the radial velocity technique, which picks up tiny wobbles in the motion of a star created by an orbiting planet’s gravitational pull. Being so tiny, Proxima d’s gravity only causes Proxima Centauri to move back and forth at around 40 centimetres per second – an exceptionally fine motion to detect over a distance of several light years.

The first hints of Proxima d’s existence were detected during efforts to observe the much larger Proxima b. This Earth-like planet was tentatively identified several years ago using the HARPS instrument on the European Space Observatory’s (ESO) 3.6-metre telescope, but its existence wasn’t confirmed until 2020 when scientists employed a new instrument, the Echelle SPectograph for Rocky Exoplanets and Stable Spectroscopic Observations (ESPRESSO), to take a closer look at the Proxima system.

In the process of verifying the existence of Proxima b, astronomers spotted an exceptionally weak signal that could correspond to an object with a five-day orbit – or could simply be fluctuations in the star itself.

After rounds of follow-up observations with ESPRESSO, the team was thrilled to confirm the signal as a new planet.

“I was excited by the challenge of detecting such a small signal and, by doing so, discovering an exoplanet so close to Earth,” says Faria.

Proxima d sets the record as the lightest exoplanet ever measured using the radial velocity technique, surpassing a planet recently discovered in the L 98-59 planetary system.

“This achievement is extremely important,” says Pedro Figueira, ESPRESSO instrument scientist at ESO in Chile, explaining that the detection of Proxima d demonstrates astronomy’s increasing capacity to capture the cosmos in fine detail.

“It shows that the radial velocity technique has the potential to unveil a population of light planets, like our own, that are expected to be the most abundant in our galaxy and that can potentially host life as we know it.”

Faria is likewise excited about what new discoveries lie in wait.

“This result clearly shows what ESPRESSO is capable of and makes me wonder about what it will be able to find in the future,” he says.

ESPRESSO’s search for other worlds will be complemented by ESO’s Extremely Large Telescope (ELT), currently under construction in the Atacama Desert, which will be crucial to discovering and studying many more planets around nearby stars.

Originally published by Cosmos as New planet in the neighbourhood