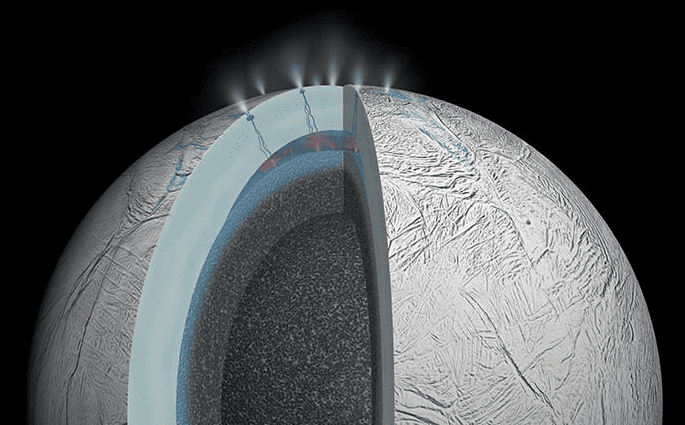 “These findings add to the possibility that Enceladus, which contains a subsurface ocean and displays remarkable geologic activity, could contain environments suitable for living organisms,” said John Grunsfeld associate administrator of NASA’s Science Mission Directorate in Washington. “The locations in our solar system where extreme environments occur in which life might exist may bring us closer to answering the question: are we alone in the Universe.”

Hydrothermal activity occurs when seawater reacts with a rocky crust to become a heated, mineral-laden solution.

In a study published in Nature, researchers analysed data on microscopic grains of rock detected by Cassini in the Saturn system. They concluded that the grains were formed when hot water containing dissolved minerals from the moon’s rocky interior traveled upward, coming into contact with cooler water.

“It’s very exciting that we can use these tiny grains of rock, spewed into space by geysers, to tell us about conditions on – and beneath – the ocean floor of an icy moon,” said the paper’s lead author Sean Hsu, a postdoctoral researcher at the University of Colorado at Boulder.

On Earth, the most common for grains of this size to form is through hydrothermal activity.

Another paper, recently published in Geophysical Research Letters, suggests hydrothermal activity as one of two likely sources of methane in the plume of gas and ice particles that erupts from the south polar region of Enceladus.

Researchers found that, at the high pressures expected in the moon’s ocean, icy materials called clathrates could form that imprison methane molecules within a crystal structure of water ice.

In one scenario, hydrothermal processes super-saturate the ocean with methane. This could occur if methane is produced faster than it is converted into clathrates. A second possibility is that methane clathrates from the ocean are dragged along into the erupting plumes and release their methane as they rise, like bubbles forming in a popped bottle of champagne.
The authors agree both scenarios are likely occurring to some degree, but they note that the presence of nanosilica grains, as documented by the other paper, favours the hydrothermal scenario.

Related stories: The Secret Life of Enceladus; The Habitable Zone