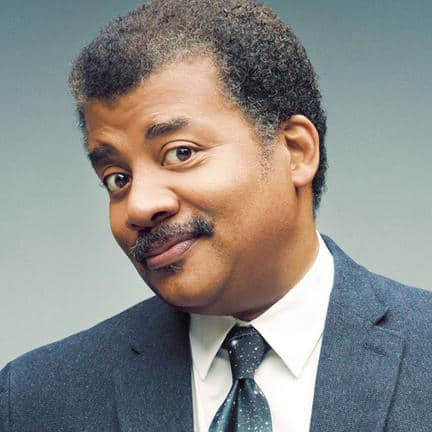 As every high school student knows, the “Goldilocks zone” is the middling distance from a star that is neither too close nor too far away to rule out the possibility of liquid water – and hence life.

To New York-based superstar astrophysicist and cosmologist Neil deGrasse Tyson, however, it’s an idea with significant flaws. Jupiter’s moon Europa is way out in the Solar System’s Mama Bear territory, but Tyson, like the folks at NASA, sees it as a prime candidate to bust the Earth’s reputation as the only biological game in town.

“Europa is a system that’s kept warm, not from sunlight,” he says. “We all learned that life requires sunlight, but really it only requires energy.

“Europa is outside of the Goldilocks zone, but it’s kept warm by Jupiter’s gravity. Beneath the upper surface of ice there’s a liquid ocean that’s been like that for billions of years. On Earth we know life began in the oceans – so if you’re a betting person, that’s the place to put the money. The best guess is right there, for sure.”

Tyson, like Stephen Hawking, Albert Einstein and very few others, is one of those rare scientists whose reputation extends far into popular culture. His position as director of New York’s Hayden Planetarium and his hosting role on the Fox-TV series Cosmos: a space-time odyssey (a reboot of Carl Sagan’s program) both ensure high status in his field.

However, a short video clip of him saying “We’re dealing with a badass here!” excerpted from a TV appearance, long ago went viral and now crops up on social media sites not even vaguely related to the Universe. The clip has been divorced utterly from its original context – a reference to Isaac Newton – but as a result the astrophysicist is now a constantly circulating meme.

One US interviewer, Joshua Topolsky, recently suggested that the last comment page ever published on Facebook, “the day before the Sun explodes”, will have embedded in it the moving image of Tyson yelling “we’re dealing with a badass here!”.

Tyson, perhaps wisely, goes nowhere near the life of Newton during our conversation. He is, however, happy to acknowledge another physicist, Brian Cox, with whom in 2013 he conducted a hilarious Twitter exchange about the practical flaws in the idea of light-sabres.

In 2014, Cox stirred up a hornets’ nest by suggesting that we are alone in the Universe. It was a statement that seemingly contradicted the current cosmological orthodoxy that holds life is more likely to be abundant. Tyson, however, thinks his sparring partner was verballed.

“I don’t think Brian Cox meant that life on Earth is the only life in the galaxy,” he says. “What he surely meant was that we are the only intelligent life, as we’ve come to define it.”

Had an asteroid not smashed into the planet … then dinosaurs would still be roaming around and we’d be quivering in a burrow somewhere.

Intelligent life on Earth, let alone in the rest of the Milky Way, is a rare phenomenon, he explains. If one regards the use of technology as the diagnostic factor, then, by self-serving definition, intelligent life is limited to only one species among millions.

“And we’re just an accident,” he said. “We derived from a rodent-like creature scurrying underfoot of T.rex, 65 million years ago.”

Had an asteroid not smashed into the planet and caused the end-Cretaceous extinction event, then dinosaurs would still be roaming around and we’d be quivering in a burrow somewhere. On that measure, if not for that unlucky direct hit, intelligent life would still not exist on Earth.

“I think [Cox’s] scepticism about intelligent life has some basis,” he says. “But for life at all? No, I don’t see why the galaxy wouldn’t be teeming with it.”

NASA’s Europa Multiple Flyby Mission is set to launch in 2025. When it reaches its destination, some six years later, it will buzz down as close as 25 kilometres from the surface of the moon. The resulting images might provide definitive evidence of life. Until then, however, the prospect of extraterrestrial biology remains empirically unsupported.

Indeed, many of cosmology’s truly big ideas remain evidence-free positions. Concepts such as metaverses and multiverses arise from theoretical rigour, but proof remains elusive. Even the idea of how one might recognise such proof remains unknown. For Tyson, however, this is no reason to stop looking.

“You can assert in advance that these questions can never be answered, but how do you really know?” he says.

“When the Greeks proposed that there was a smallest unit of matter, indivisible, and called it an ‘atom’, they were imagining something that they could not yet measure.

“Later on, we would find ways to measure an atom, even though at the time the concept was proposed it was unimaginably small. And then we had an atom and we found out we can split it, and go even smaller.”

In quantum mechanics as in cosmology, the more eyes that search for answers, the more likely it is that answers will be found. Tyson is heartened by continuing investment in space research, not just by the US, Europe and Russia, but increasingly by other nations. He cites Mexico, Canada, South Africa, India, China and Singapore as prime examples.

And as more and more nations turn to the night sky, perhaps, the more the unknowable will become simply the unknown.

“To have ideas that go beyond what you can experimentally reach at that time should not prevent you saying that just because today we cannot conduct that experiment we shouldn’t therefore investigate it,” he says.

“I think that would be short-sighted. To not study something, simply because today you can’t demonstrate that it’s there, prevents the full frontier of new ideas from guiding the next experiment – something that maybe no one has thought of yet.

“I take issue with the very idea that there could be something that can never be known, and never be tested. I haven’t seen that in the very history of my field, so I’m not going to assume that it will exist in the future of my field.”

So there. Thus sayeth the badass.