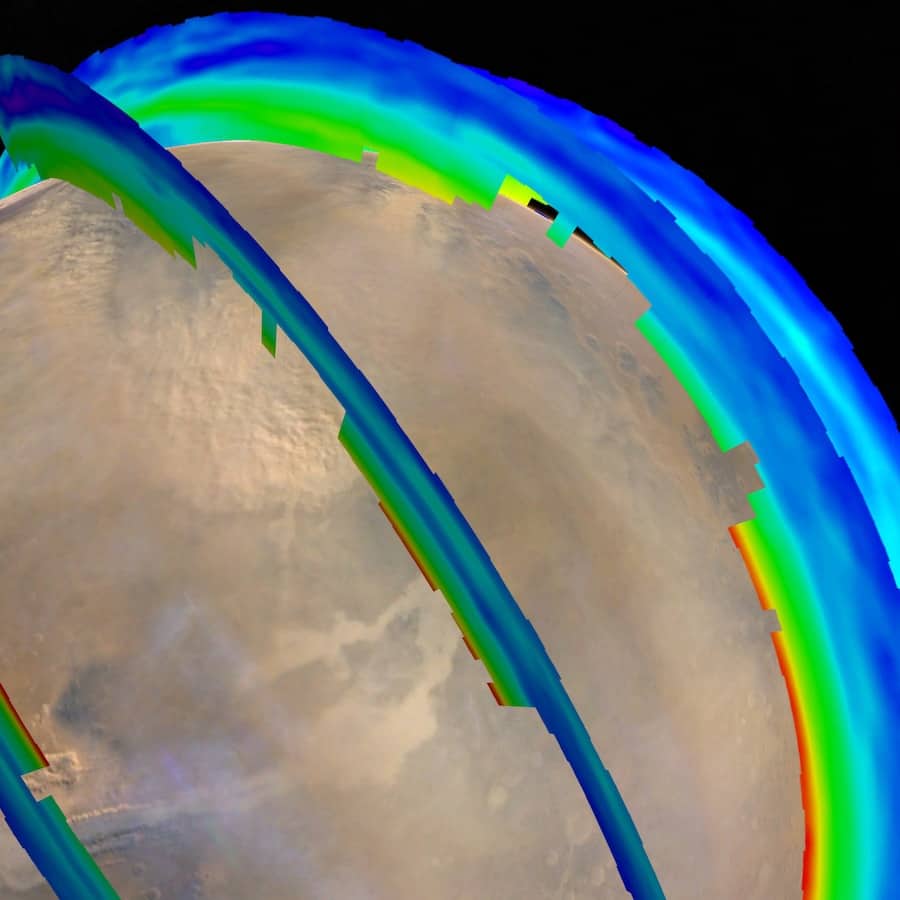 These occur in sequence at about the same times each year (about two Earth years) during the southern hemisphere spring and summer.

Most Martian dust storms are smaller than about 2,000 kilometres across and dissipate within a few days.

Some become regional, affecting up to a third of the planet and persist for up to three weeks.

A few encircle Mars, covering the southern hemisphere but not the whole planet.

Only twice since 1997 have dust storms fully enshrouded Mars.

Scientists determined the pattern of the storms using temperature data, rather than visible dust. It is an accurate indicator, even when dust levels are low.

The dust thrown into the atmosphere absorbs sunlight and heats up. In some cases the difference in temperature between dusty and clear “air” can be dramatic – more than 35 °C.

The heating also influences global wind distribution, which can produce downward motion that warms the air outside the dust-heated regions.

In this way, temperature observations capture both direct and indirect effects of the dust storms on the atmosphere.

“When we look at the temperature structure instead of the visible dust, we finally see some regularity in the large dust storms,” said David Kass of NASA’s Jet Propulsion Laboratory in Pasadena, and instrument scientist for the Mars Climate Sounder on NASA’s Mars Reconnaissance Orbiter.

“Recognising a pattern in the occurrence of regional dust storms is a step toward understanding the fundamental atmospheric properties controlling them,” he said.

“We still have much to learn, but this gives us a valuable opening.”

The ability to predict dust storms will also improve safety conditions for robotic or human missions to Mars.

NASA has been operating orbiters around the planet since 1997.

The Mars Climate Sounder on Mars Reconnaissance Orbiter, which reached Mars in 2006, and the Thermal Emission Spectrometer on Mars Global Surveyor, which studied Mars from 1997 to 2006, have used infrared observations to assess atmospheric temperature.