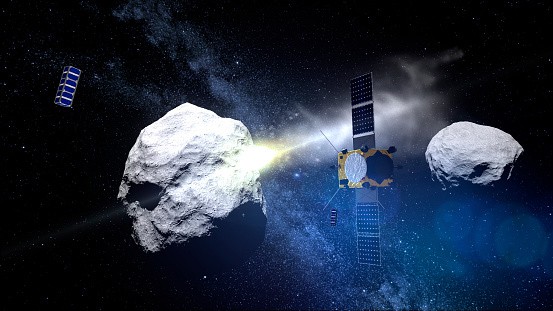 A planned NASA and European Space Agency (ESA) joint mission is poised to test whether it is possible to knock an asteroid from one orbit into another.

The mission, which has not yet fully funded, is part of the space agencies’ focus on “planetary defence”: the protection of Earth from collision with dangerous asteroids.

But instead of trying to blow up such a threat, as in the 1998 science fiction movie Armageddon, the Asteroid Impact and Deflection Assessment mission intends to prove that an asteroid can be shifted by hitting it with a fast-moving spacecraft launched from Earth.

“We save Bruce Willis’s life,” quips Patrick Michel, a planetary scientist from the Observatoire de la Côte d’Azur, in Nice, France, in a reference to the movie. “He doesn’t have to sacrifice himself.”

The ESA spacecraft, called AIM (for Asteroid Impact Mission) will rendezvous with the selected asteroid and go into orbit around it in early 2022.

The NASA spacecraft, called DART (Double Asteroid Redirection Test) will be timed to hit the rock a few months later, at a speed of six kilometres per second, while the AIM spacecraft and earthbound telescopes watch.

The target is a moonlet of 65803 Didymos, a near-Earth asteroid discovered in 1996. At the time of impact it will be about 11 million kilometres away.

As the world “double” in the DART mission’s name suggests, Didymos is a binary system, meaning that there are two asteroids orbiting each other. The large one is about 800 metres across; the moonlet measures about 160 metres.

The impact is expected to alter the moonlet’s orbital speed around Didymos by about a half-millimetre per second, says Andrew Cheng, a planetary scientist at the Johns Hopkins University Applied Physics Laboratory in Laurel, Maryland, who is lead investigator for the NASA side of the project.

“That doesn’t sound like much, but it is very easily measured, both by the AIM spacecraft and by telescopes on the ground,” he said, speaking by phone from the 2017 Lunar and Planetary Science Conference in the Woodlands, Texas, where he is presenting details on the project.

The effect is easy to measure from Earth, he adds, because the moonlet’s orbit is aligned so that viewed from down here it passes behind Didymos once each circuit.

These disappearances make it easy to precisely measure its orbital period, Cheng says, estimating that even the tiny speed change expected to be imparted by the crash will alter its 11.9-hour orbit by several minutes.

One of the goals of the mission is to test whether it is possible to hit such a small, distant object with a spacecraft moving at such a high speed. But it’s also important, Cheng says, to see how the asteroid responds to the impact.

That’s because hitting an asteroid with a spacecraft isn’t like hitting a billiard ball with the cue ball.

“When we have a high-speed impact on an asteroid, you create a crater,” Cheng says. “You blow pieces back in the direction you came from.”

The ejection of this material shoves the asteroid in the opposite direction, significantly increasing its momentum change.

“The amount can be quite large,” Cheng says, “More than a factor of two.”

With the AIM spacecraft orbiting nearby, the impact will also allow the first scientific measurements of precisely what happens when an asteroid (or moon) gets hit by a fast-moving object, such as the 500-kilogram DART spacecraft.

“This will tell us about cratering processes,” says Michel, who is the lead investigator of the ESA side of the mission.

That is important because planetary scientists use crater counts on other worlds to help determine how old their surfaces are, based on the numbers and sizes of objects that have hit the surface since it formed.

But most of the research designed to correlate crater size to the size of the impactor rests either on modeling or small-scale laboratory tests.

This is the first time, Cheng says, that scientists will be able to test their models by looking at a crater on an asteroid, knowing exactly what hit it and how fast it was moving. Michel adds that the target moonlet will also be the smallest asteroid ever to be visited by a spacecraft.

“This is important for science and for companies interested in asteroid mining because so far we don’t have any data regarding what we will find on the surface of such a small body,” he says.

“Each time we discover a new world we have surprises,” he adds. “The main driver [of this mission] is planetary defence, but it has a lot of scientific implicaitons.”