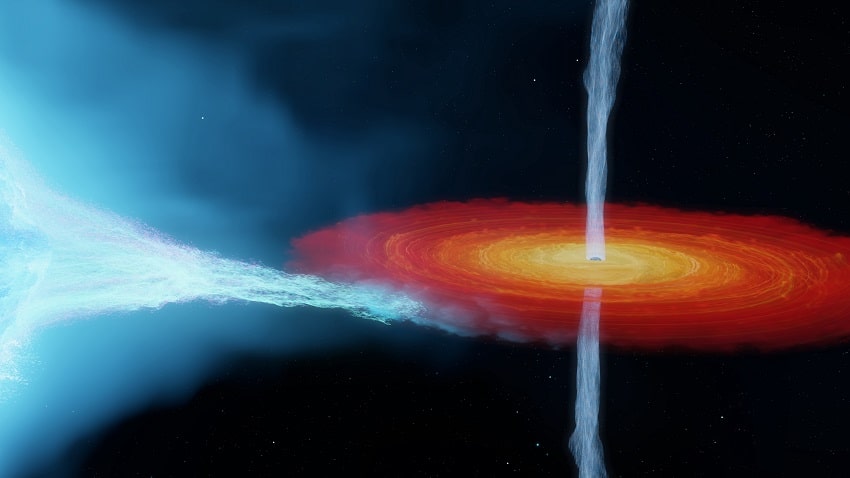 The first black hole ever discovered is more massive than we thought, according to an international team of astronomers.

Cygnus X-1 is a binary system consisting of a supergiant star and an enormous stellar-mass black hole, formed after the collapse of another giant star tens of thousands of years ago.

Now, in a study published in Science, astronomers have made new observations that show Cygnus X-1 is 7200 light-years from Earth, not 6100 light-years as previously observations found. They also show that it’s 50% more massive then we thought.

To measure the distance, the team turned to the Very Long Baseline Array (VLBA): an array of telescopes spanning the entirety of North America that combine their data to observe objects with high resolution.

Lead author James Miller-Jones explains that the VLBA observed Cygnus X-1 over six days, spanning a full orbit of the black hole around its companion star. The array calculated the black hole’s distance by measuring how far it appears to move relative to the background.

“If you hold your finger out in front of your eyes and view it with one eye at a time, you’ll notice your finger appears to jump from one spot to another,” explains Miller-Jones, who is based at Curtin University and the International Centre for Radio Astronomy Research (ICRAR). “It’s exactly the same principle.”

Combining this data with previous research from 2011 allowed the team to show that Cygnus X-1 is further away than previously thought, and more massive too.

The black hole is 21 times the mass of our Sun – 50% greater than previous estimates.

Co-author Ilya Mandel, from Monash University and the ARC Centre of Excellence in Gravitational Wave Discovery (OzGrav), says that this may challenge our understanding of black hole formation, since Cygnus X-1 began its life as a star 60 times the mass of our Sun.

“Stars lose mass to their surrounding environment through stellar winds that blow away from their surface,” he explains. “But to make a black hole this heavy, we need to dial down the amount of mass that bright stars lose during their lifetimes.”

The measurements also reveal that Cygnus X-1 is spinning close to the speed of light, faster than any other black hole found so far.

“Studying black holes is like shining a light on the Universe’s best kept secret – it’s a challenging but exciting area of research,” concludes Miller-Jones.