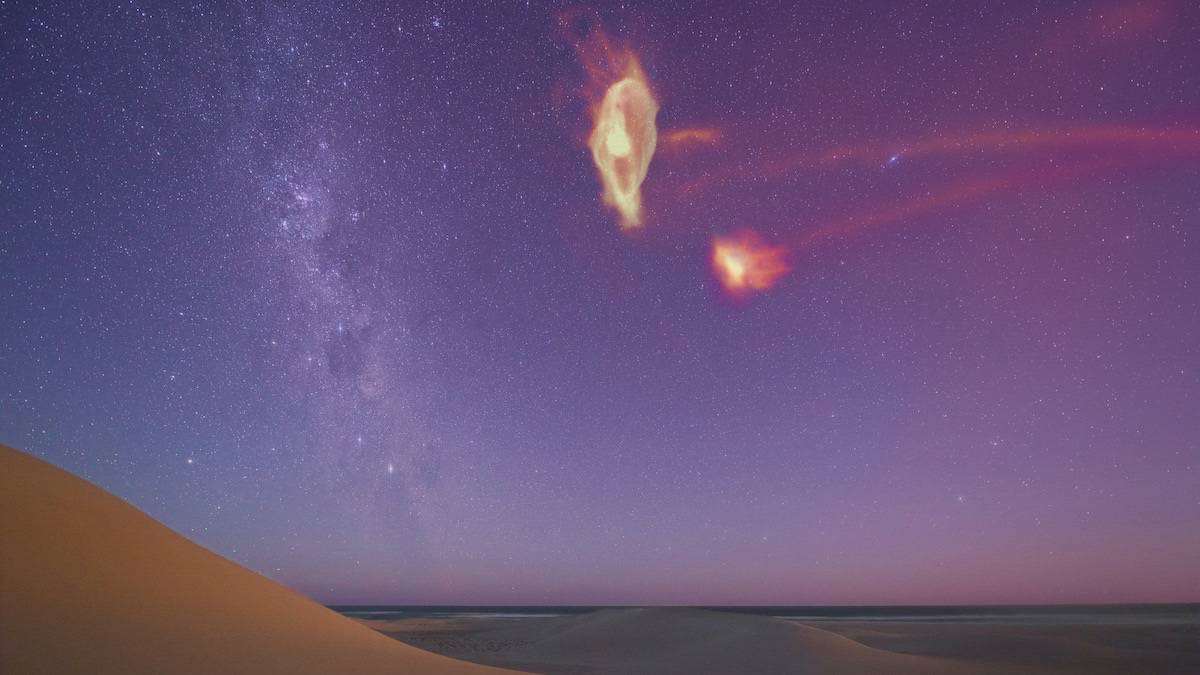 A modified image from the numerical simulations of how the Magellanic System would appear in the night sky if we could see in UV and X-ray. Credit: Scott Lucchini / Colin Legg
More on:
Large Magellanic Cloud

The Magellanic Stream is hard to ignore. The enormous stream of gas stripped from the two dwarf Magellanic galaxies that orbit the Milky Way spreads over a huge chunk of the southern night sky.

The question is not why it is so big (it has the mass of a billion Suns), but why it still exists at all. Moving through the Milky Way’s hot gas halo, it really should have faded away, like the condensation trail behind an aircraft.

We may now have an answer. Astronomers have found evidence that the Small Magellanic Cloud (SMC) and the Large Magellanic Cloud (LMC) are themselves surrounded by huge, hot haloes that cocoon the gas stream and contribute most of its mass.

“We are fortunate here in the Southern Hemisphere that we can see these nearby galaxies with the naked eye. Now we know that these stellar smudges are surrounded by hot, huge, gassy spheres that overlap each other,” says Joss Bland-Hawthorn from Australia’s University of Sydney, co-author of a paper in the journal Nature.

“If humans could see in the ultra-violet and X-ray spectra, we could see these remarkable structures emitting plasma across much of the night sky.”

Previous models have suggested that gravitational tides and the force of the galaxies pushing against one another formed the Magellanic Stream as the dwarf galaxies came into orbit around the Milky Way.

But these models are outdated, says first author Scott Lucchini, from the University of Wisconsin-Madison, US, because while they explain the stream’s size and shape, they account for just a tenth of its mass.

Armed with new knowledge that the Magellanic Clouds are massive enough to have their own corona of warm gas, Lucchini and colleagues carried out simulations, dividing the creation of the Magellanic Stream into two periods.

Under this model, while the Magellanic Clouds were still far away from the Milky Way, the LMC stripped gas away from its smaller partner over billions of years. This stolen gas ultimately contributed 10-20% of the final mass of the stream.

Later, as the clouds fell into the Milky Way’s orbit, the corona gave up one-fifth of its mass to form the Magellanic Stream, which was stretched across an enormous arc of the sky by interactions with the Milky Way’s gravity and its own corona.

The authors say their model is the first to explain the full mass of the Magellanic Stream and the vast majority that comes from ionised gas, which is more energetic than non-ionised gas.

It also better explains how the stream adopted its unusual shape and why it lacks stars: it was formed largely from the star-free corona, not the dwarf galaxies themselves.

“This work refines our understanding of how gas accretes onto the Milky Way and forms the reservoir for future star formation,” says Professor Bland-Hawthorn.

And it can be directly tested. The Hubble Space Telescope should be able to see the tell-tale signatures of the corona of gas surrounding the Magellanic Clouds.

The infall of the Magellanic Clouds towards the Milky Way. Observational data is shown on the left with the points representing ionised gas, while the simulation is shown on the right. The colours represent the line-of-sight velocity of the gas and the brightness indicates the relative density. The movie begins 550 million years ago and continues until present day. Credit: Scott Lucchini