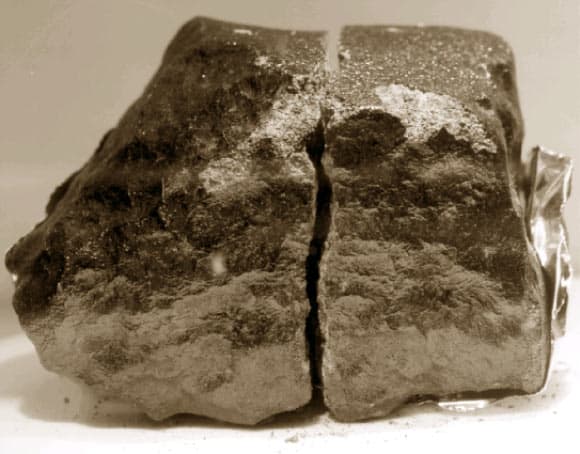 An electrochemical process resulting from the interaction of particular minerals, sulfides and brine explains the presence of organic compounds found in Martian meteorites, researchers reveal.

The findings – the results of an extensive microscopic analysis led by Andrew Steele of the Carnegie Institution for Science in Washington DC, US – strongly imply that the compounds are evidence of geophysical processes, not biological ones.

They also suggest that organic material can be created indigenously on the planet, rather than being deposited by either asteroids or interstellar dust – a finding, Steele and colleagues say, that “has profound implications for our understanding of other Martian phenomena, including the presence of methane in the atmosphere”.{%recommended 8063%}

The researchers explored three Martian meteorites, dubbed Nakhla, Tissint and NWA 1950. Nakhla fell to Earth in Egypt in 1911 and was the first to hint that it might have been exposed to water at some stage. The second landed in Morocco a century later. NWA 1950 was also found in Morocco, in 2001, although exactly where is unknown.

In particular, they looked at a class of minerals known as spinels found within the three meteorites – including titano-magnetite, magnetite, pyrite, and pyrrhotite – and found evidence that they had very likely interacted with a brine containing carbon-dioxide to produce organic compounds and sulfides.

The results closely match conclusions drawn from the discovery of organic material in ancient sedimentary rocks in situ on the planet by NASA’s Sample Analysis at Mars (SAM) instrument on board the Curiosity rover.

“These two datasets together represent a mutually confirming analysis of the presence and provenance of organic material in Martian materials conducted using state-of-the-art analysis tools on two planets,” the scientists write in a paper published in the journal Science Advances.

Steele and colleagues suggest further analysis on more samples will be required to fully confirm their results – and suggest that they could be very important not only in the field planetary geoscience, but also in astrobiology.

The evidence suggests that the Martian organic compounds had an abiotic – that is, non-biological – origin, and are certainly not proof of life. However, they may indicate the existence of conditions conducive to it.

“While found here in Martian samples, a similar process would occur wherever igneous rocks encountered brines, and therefore may be a dominant process for the production of organic phases and essential prebiotic molecules and their precursors on early Earth, Europa, and Enceladus,” the researchers conclude.

Originally published by Cosmos as Martian organics arose on the planet, but not through biology