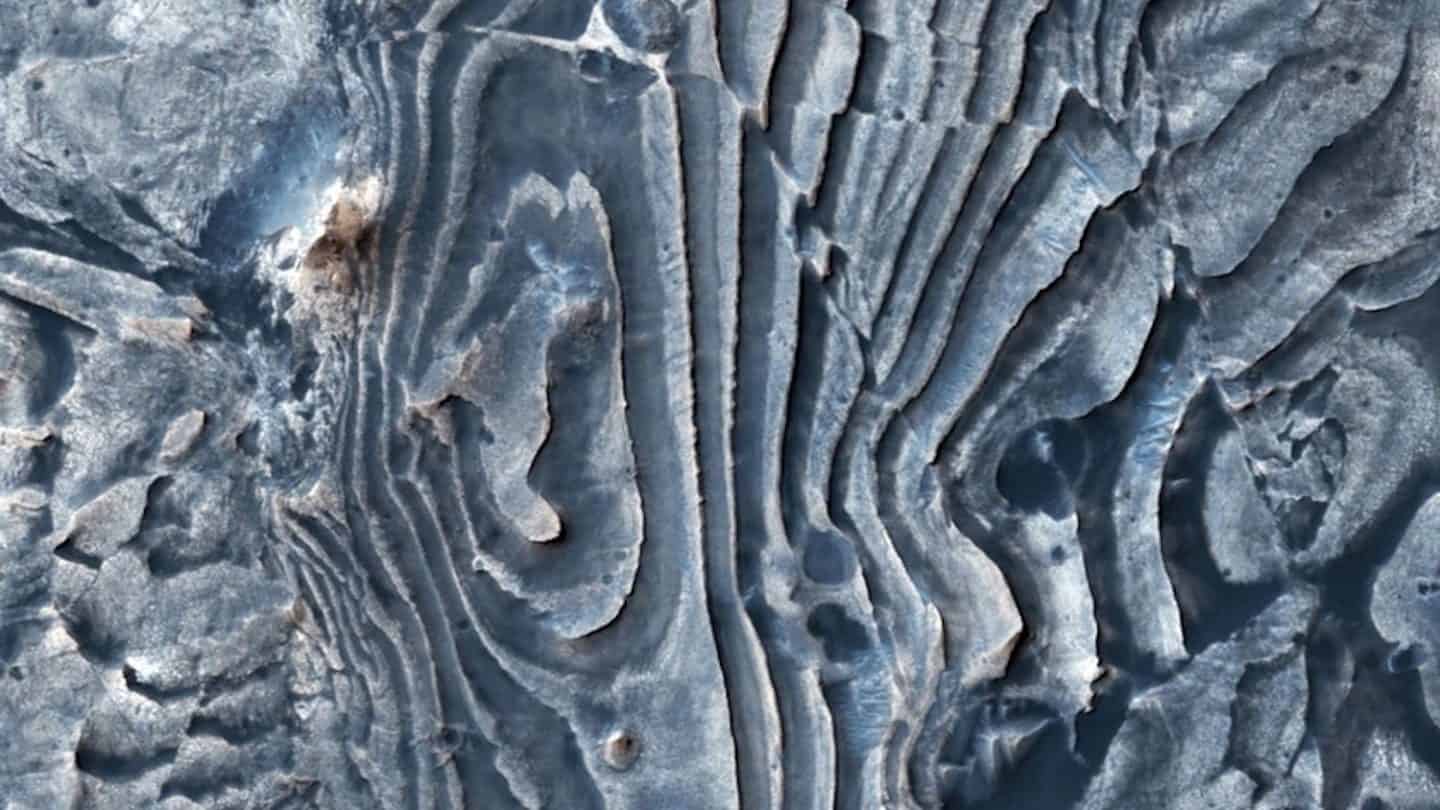 Faulted layers in the Martian ground. All that’s needed is a thin layer of gel. Credit: NASA/JPL-Caltech/University of Arizona.

Terraforming planets is a stock-in-trade trope of science fiction, but in reality, the engineering solution to making Mars habitable may be rather more mundane.

In a paper published in the journal Nature Astronomy, a small team of researchers led by Robin Wordsworth of Harvard University in the US demonstrates that comparatively small expanses of silica aerogel suspended above the ground would be enough to raise the temperature of the atmosphere beneath them sufficiently to transform ice into permanent liquid water.

The translucent aerogel – no more than two to three centimetres thick – would also filter out harmful ultraviolet radiation while still permitting enough visible light to pass through to allow plant-life to photosynthesise.

The method, the researchers calculate, could raise the atmospheric temperature beneath the shields by 50 degrees Celsius – enough to get surface water above its freezing point, making it bioavailable to transplanted Earth plant species.

Wordsworth and colleagues arrived at their cheap-and-cheerful solution for rendering Mars green-friendly through a combination of laboratory experiments and computer modelling.

The approach, they write, is ideally suited for local, isolated deployments, allowing selected areas to be colonised and cultivated.

The strategy is in stark contrast to existing proposals to terraform Mars, all of which, the authors note, “involve massive environmental modification that will be well beyond human capability for the foreseeable future”.

Aerogels are already available, and the technology to modify their chemistry to make an optimal match with Martian environmental conditions is commonplace.

A site-specific approach – selecting particular areas and changing them in isolation – means that viable outposts can be established, and then gradually linked up to form a planetwide matrix.

Further testing of silica aerogel cultivation methods can be carried out in extreme environments on Earth, they write, before the tech, and presumably technicians, are shipped off to Mars.

Wordsworth and colleagues, however, are confident – so much so that they are already contemplating the wider matters that taking aerogels to the red planet will create.

“As there is the potential for Mars to be made habitable to photosynthetic life in the near to medium term, important ethical and philosophical questions must be considered,” they write.

“Most obviously, if Mars still possesses extant life today, its survival or detection might be hampered by the presence of Earth-based microorganisms.”