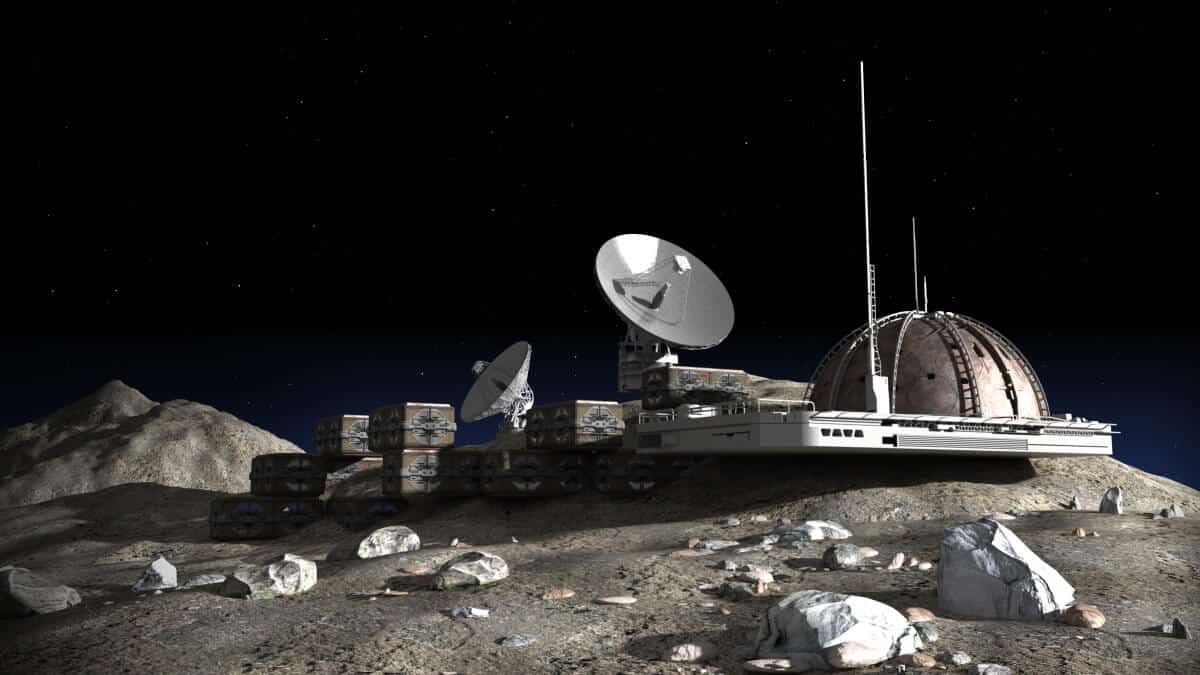 3D Illustration of a lunar base. Credit: 3000ad / iStock/Getty Images Plus / Getty.
More on:
Moon

Over half a century since humanity first set foot on the Moon, the problems of setting up extra-terrestrial bases remain. How would the inhabitants of a Moon base make necessary materials like water and oxygen hundreds of thousands of kilometres from Earth? How would they deal with their waste?

Research by Chinese material scientists may provide some answers to how a self-sufficient Moon base could operate.

Among the most abundant resources on the Moon are solar radiation and dirt. Moon dirt, but still dirt. In findings published in Joule today, the Nanjing University researchers analysed lunar soil brought back by China’s Chang’e 5 spacecraft. In the soil they found compounds rich in iron and titanium that can be used to make oxygen, fuel and water using sunlight and carbon dioxide.

The researchers propose “extraterrestrial photosynthesis” as a strategy to live on the Moon. Water extracted from the Moon and astronauts’ breathing apparatus can be electrolysed (the use of electricity to split water molecules) – using sunlight and converted into hydrogen and breathable oxygen.

The hydrogen can then be combined with CO2 exhaled by astronauts and the catalysts in the lunar soil to make hydrocarbons like methane for fuel.

While catalysts available on Earth are more effective, the researchers plan to test different approaches to improve catalytic efficiency. One method being trialled involves melting the lunar soil into a high-entropy nanostructure.

“We use in-situ environmental resources to minimise rocket payload, and our strategy provides a scenario for a sustainable and affordable extraterrestrial living environment,” says co-lead author Yingfang Yao.

Previously, proposed extraterrestrial survival strategies have relied on energy resources from Earth. NASA’s Perseverance rover, for example, took with it an instrument that can use carbon dioxide in the planet’s atmosphere to make oxygen, but the instrument is powered by a nuclear battery transported from Earth. The Nanjing University scientists’ approach uses only local resources and sunlight for power. The team wants to test the systems in space, likely as part of future crewed missions sent from China. “In the near future, we will see the crewed spaceflight industry developing rapidly,” says Yao. “Just like the ‘Age of Sail’ in the 1600s when hundreds of ships head to the sea, we will enter an ‘Age of Space’. But if we want to carry out large-scale exploration of the extraterrestrial world, we will need to think of ways to reduce payload, meaning relying on as little supplies from Earth as possible and using extraterrestrial resources instead.”