Home ■ Space ■ Space Exploration ■ Looking at the sea, then the sky 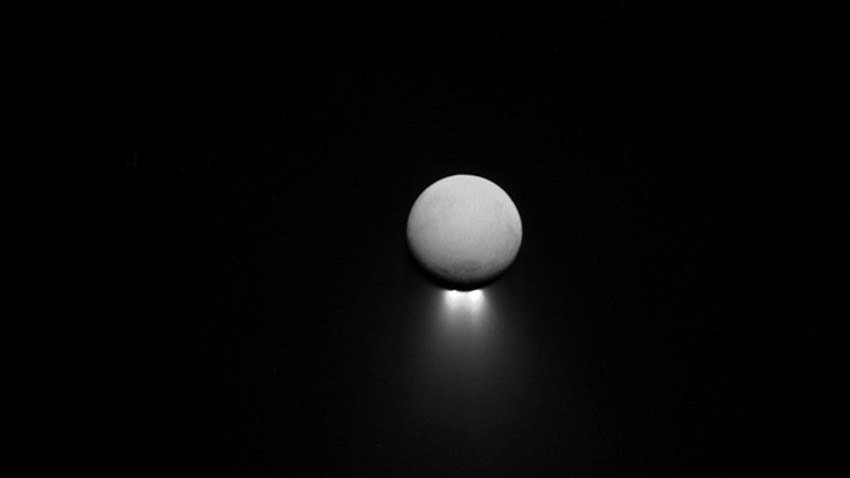 Saturn’s moon Enceladus with the Sun behind it. Are there oceans in the picture as well? Credit: NASA/JPL-CALTECH/SPACE SCIENCE INSTITUTE

NASA is reaching out to oceanographers for help in figuring out how to determine if extraterrestrial oceans are sufficiently habitable that they might have life.

Not that the oceans of interest are on exoplanets circling distant stars.

Rather, says Chris German, a marine geophysicist at Woods Hole Oceanographic Institution, Massachusetts, they are right here in our own Solar System, where scientists think there might be as many as 20 worlds that have liquid oceans beneath their icy crusts.

Many are moons of Jupiter and Saturn, such as Europa, Ganymede, Callisto, Titan, Enceladus, and Mimas. But Neptune’s giant moon Triton is also a candidate, and even Pluto may well have an ocean beneath its frozen crust.

As a result, German told last week’s American Geophysical Union’s Ocean Sciences Meeting in San Diego, NASA space scientists have realised that in planning missions to these worlds, there are things they could learn from oceanographers.

One role is helping to determine the type of geological conditions under which enough energy can rise from beneath a seafloor to support life as we know it.

That’s important because the ice caps over the outer Solar System’s oceans are believed to be many kilometres thick – more than enough to prevent any organisms living in them from relying on sunlight for energy.

On Earth, life can subsist on energy and nutrients brought up from beneath the seabed via hot springs in a process known as hydrothermal circulation, says Donna Blackman, of Scripps Institution of Oceanography, California.

These springs and the hydrothermal circulation that produces them are richest in nutrients near mid-ocean ridges, where the seabed is splitting and oozing magma into the sea. But they can also occur under other geophysical conditions, ranging from mud volcanoes to seeps where ocean water percolates through fractures in the subsurface, gains heat and nutrients, and re-emerges.

Also important is understanding how extraterrestrial oceans might circulate nutrients and heat beneath the all-encompassing ice cap.

Earth’s oceans are a thin veneer over our planet’s rocky interior. But on outer Solar System worlds “they are hundreds of kilometres thick”, says Krista Soderlund, of the University of Texas, Austin.

That means they are quite different from our own oceans – starting with the fact that there are no continents to divide them. But that doesn’t mean scientists can’t model how water circulates within them, in the extraterrestrial equivalents to Earth’s ocean currents.

One finding, Soderlund says, is that warm water can rise to the top, then drop back to the depths as it encounters the overlying icecap, in a constant overturning process.

Changing gravitational forces as a moon’s orbit carries it first closer then farther from its primary can also produce currents.

Even the primary’s magnetic field can produce magnetically forced ocean currents, Soderlund adds, so long as the magnetic field is tilted from the orbital plane of its moon.

The effect, she says, can be large enough for the ocean current to exert a drag on the overlying ice, causing it to slowly slide around the moon’s core in a process called asynchronous rotation.

Also useful, says Kevin Arrigo, a biological oceanographer at Stanford University, California, is understanding how life might live on, in, or underneath an ice cap.

On Earth, he says, the ice has cracks, pockets of water, and films of microorganisms along its bottom.

“Interfaces are really good places for life,” he says. “They tend to concentrate things, like nutrients and other food sources. Whether that’s happening on other planets is unknown, but it’s certainly happening on Earth.

“There is an entire ecosystem that lives within sea ice in polar regions that might be an analog for what’s happening on other [worlds].”

Meanwhile, three space missions are on the drawing board for a return to the icy worlds of the outer Solar System: NASA’s Europa Clipper, ESA’s Jupiter Icy Moon Explorer (JUICE), and NASA’s recently approved Dragonfly mission to Saturn’s moon Titan, all scheduled for launch in the next few years.

But that may just be the beginning.

NASA, German says, is now beginning the process of creating its next “decadal plan”, which may include additional missions to the outer planets.

Planning, building and launching spacecraft, he notes, is a long process. But now, he says, “we know that it makes sense to bring oceanographic knowledge to bear in planning those missions”.