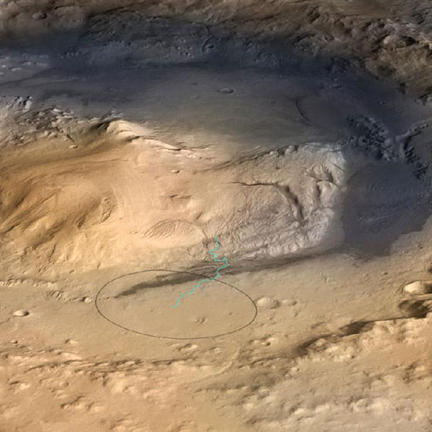 Ever since 1877 when Italian astronomer Giovanni Schiaparelli pointed his telescope at the red planet and saw channels, Earthlings have been titillated by the possibility of life on Mars. The NASA missions of the ’60s and ’70s dispelled those notions. Definitely no canals; not even a trace of liquid water. Even the geology appeared dead, with its gigantic but long-silent volcanoes.

But since 2004, better instruments and wide-ranging rovers on Mars’ missions have started painting a different picture. There was once abundant flowing water, and ice still exists in pockets at the poles – and possibly elsewhere. The latest findings from the Curiosity rover reported on 16 December at the meeting of the American Geophysical Union in San Francisco, upped the ante. The planet emits mysterious whiffs of methane, a result published online in Science the same day. Considering most methane on Earth is produced by microbes, this tantalising finding was widely aired by the world’s media. Less reported was a second result, soon to be published in the Journal of Geophysical Research. Curiosity unearthed evidence of complex mixtures of carbon-based (organic) molecules in sandstone rocks.

Neither the methane nor the organic molecules in the rock are evidence of life. They could have come from interstellar dust particles or been carried aboard meteorites, and some methane was probably locked into the planet’s mantle when it formed. But the possibility that these complex carbon compounds were produced by life, however unlikely, cannot for now be excluded. Indeed they strengthen the simmering case that life could once have existed on Mars – or perhaps still does below the punishing Martian surface.

And therefore, “it’s worth coming back”, says John Grotzinger, the Caltech-based leader of Curiosity’s on-board science lab. Indeed that is NASA’s plan. In 2020, the next-generation Rover will be equipped not only to look for the possibility of life but for life itself.  Newly miniaturised, Mars-proof instruments such as  the SHERLOC (Scanning Habitable Environments with Raman and Luminescence for Organics and Chemicals), will point a beam at slabs of rock to locate promising deposits of organic compounds. Those deposits will be extracted and bought back to Earth to be examined more closely.

And while Rover 2020 will be a robot, NASA is pushing ahead with a plan to send humans by 2030. On 5 December a test launch and sea-landing of Orion took place – it is a bell-shaped module much like the one that took Apollo astronauts to the Moon. Orion was launched by a commercial Delta IV rocket but the real mission to Mars will need the more powerful NASA Space Launch System to lift the orbiter and landing model. If NASA can keep public and political enthusiasm on the boil, we are all set for the manned exploration of Mars.

The 2004 Spirit and Opportunity rovers beamed back images of carved valleys, imprints of meandering streams, and pebbly rocks. Mars had once been wetter and warmer. On 5 August, 2012, Curiosity was gently lowered by sky crane on to Bradbury landing (named after American sci-fi writer Ray Bradbury, author of the The Martian Chronicles) with the Mars science laboratory on board to examine the case for life on Mars. The lab’s instruments include a quadrupole mass spectrometer, a gas chromatograph and a tunable laser spectrometer that can identify minute traces of complex molecules. On Earth, such sophisticated equipment can take up whole labs. On Curiosity’s back, they are suitcase sized.

Finding methane on Mars is intriguing, but it’s not the first time plumes have been reported wafting from the planet.

Curiosity’s landing site within the 154 kilometre-wide Gale Crater was chosen because orbiting cameras spied different layers of exposed rocks. It was hoped that, like the layers in the Grand Canyon, they might reveal something of the planet’s geological history. The hunch paid off. After exploring a kilometre or so and analysing different types of rocks, the data spoke. A year ago, Science magazine published a paper: “A Habitable Fluvio-Lacustrine Environment at Yellowknife Bay, Gale Crater, Mars”.

It reported that Gale crater was once a water-filled lake that could have lasted for millions of years. Just why it evaporated along with all Mars’s surface water is a mystery that instruments on board NASA’s orbiter, Maven, are trying to solve. Maven arrived last September together with India’s Mars orbiter mission (as reported on the COSMOS news blog). In contrast to the fast water that carved the Martian valleys, the water in Gale Crater could have existed for long enough to support life. Moreover the paper claimed, “We can envisage many combinations of terrestrial microbes that would be suited to form a Martian biosphere … at Yellowknife bay”. So the scene was well set for the latest discovery of methane and complex carbon-based molecules in the petrified mud and sands deposited in Gale Crater.

Finding methane on Mars is intriguing, but it’s not the first time plumes have been reported wafting from the planet. In 2003 NASA’s infrared telescope at Mauna Kea, Hawaii, detected methane plumes in the northern hemisphere during the Martian spring and summer. It was reminiscent of the stores of methane wafting out as methane clathrates (methane of microbial origin trapped in a cage of frozen water molecules) thaw out beneath the sea floor  or as the tundra melts on Earth’s northern hemisphere each summer. In 2004 a spectrometer on the European Space Agency’s Mars Express orbiter also spied the signature of methane – at levels ranging from 0-30 parts per billion across the surface. But these off-planet measures were plagued by uncertainty as the detected levels were at the limit of the instrument’s sensitivity.

Curiosity’s readings from the surface were deemed far more reliable. Initially, however, it was a disappointing result. It registered methane levels at around 0.7ppb – but that was within the measurement error so it could have been nothing. Over the next 20 months, its tuneable laser spectrometer kept sniffing the atmosphere. In November 2013, Curiosity’s scientists got a surprise. “It was an ‘oh my gosh moment’,” recalls Chris Webster from NASA’s Jet Propulsion Laboratory. The reading was 5.5ppb. Over the next few weeks, the level peaked at 9ppb. Then two months after the first high reading, the levels fell back to where they’d been, near zero.

The source of the methane plume remains a mystery. It does not appear to correlate with Martian seasons, or pressure changes or asteroid impacts that might have loosened buried stores of methane. But, in the words of Sushil Atreya, director of the University of Michigan’s Planetary Science Laboratory, whether the source is geological or biological in origin, “it tells us Mars is currently active”.

Besides sniffing the atmosphere, Curiosity was also busy drilling shallow holes in four different types of rock, cooking the grindings and testing the identity of the volatiles in its science lab. Three of the sites produced no reading, but the fourth did.  It was drilled within the Cumberland mudstone – a fine-grained rock containing clays that, based on Earthly experience, are good for preserving organics. Three organic compounds were detected here: dichloromethane, dichlorobenzene, and high levels of chlorobenzene. Though a chemical leak previously caused a bit of trouble for the on-board lab, MIT geobiologist  Roger Summons (previously with Geoscience Australia) who presented the results at the  San Francisco meeting, says those problems do not detract from the findings. He pointed out the tests were repeated multiple times for each site, and the readings before and after the Cumberland site were negative. Just what the original identity of the molecules were, is hard to say.  They were likely altered during the cooking process, since Martian rock contains a chemical called calcium perchlorate which, when heated, reacts with and alters organic structures.

And what if the Cumberland mudstone does contain complex carbon-based molecules?  At the least, says Summons, it shows there are niches on Mars where organic molecules can exist without being destroyed by cosmic rays. They may have nothing to do with life. For instance meteorites such as the Murchison meteorite that hit Earth in 1969 are rich in organic compounds including amino acids, the building blocks of proteins, and the nitrogen-containing bases (adenine, guanine, cytosine, thymine) that are used to code DNA. And Mars’ sheer atmosphere is constantly pierced by small meteorites . But then again the organics might have originated from microbes at the bottom of Yellowknife bay. On Earth microbes can survive in acid pools, in volcanic vents and under thick sheets of ice. So why not on Mars? “It’s even worse on Mars,” say Summons, but adds “still, we can’t imagine all the strategies life might invoke to survive in weird places”.

For Helen Maynard Casely, a planetary scientist based at Australia’s Nuclear Science and Technology Organisation, the findings are exciting no matter the origin.  “My money is on a geological source, as much as I’d like there to be little green monsters on Mars.”