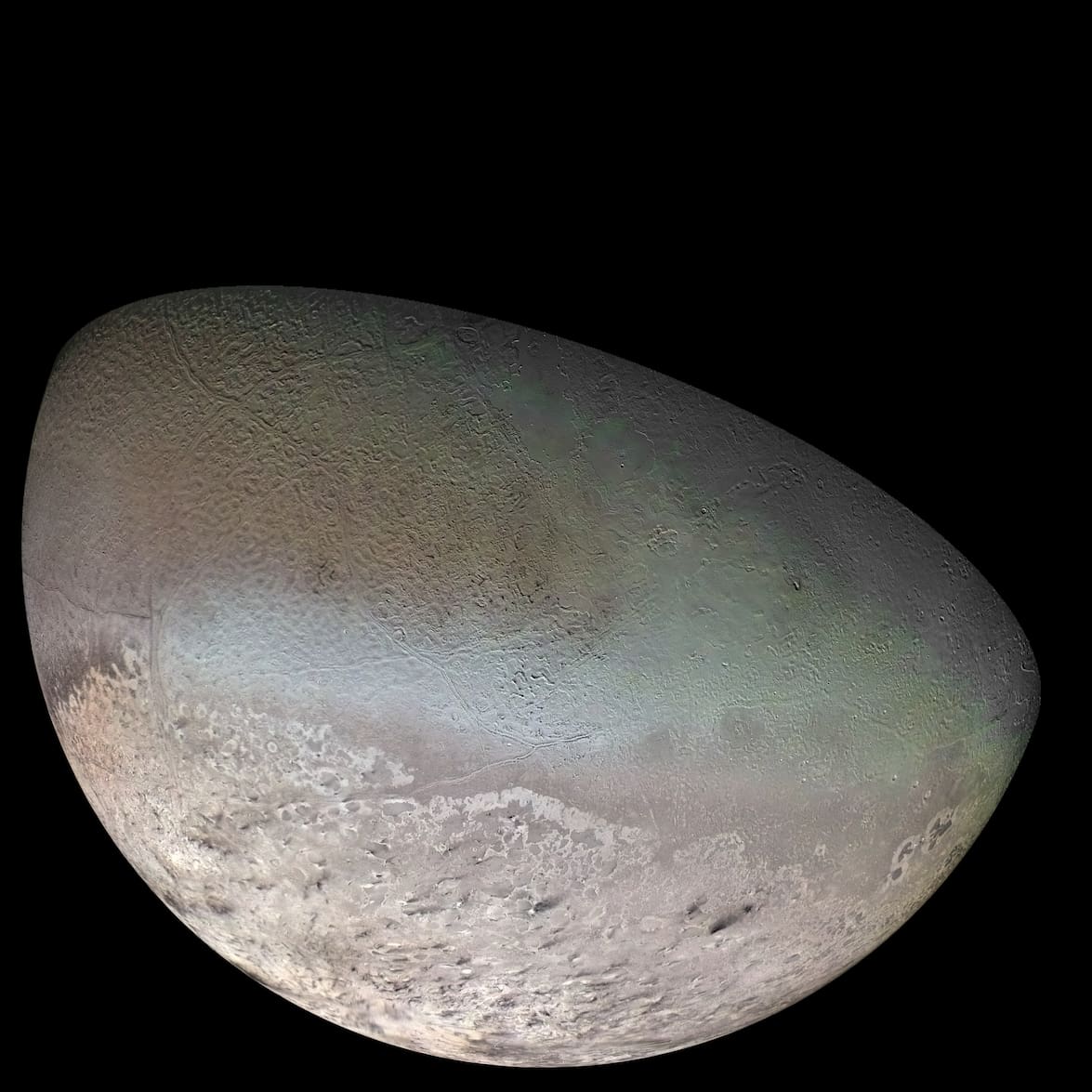 When NASA’s Voyager 2 spacecraft flew by Neptune’s Pluto-sized moon Triton in 1989, it saw a number of strange features, including plumes of particles rising 8 kilometres above its surface. Elsewhere, the spacecraft — still the only mission ever to visit Neptune — saw fans of dark material on the surface, presumably particles deposited by no-longer-active plumes.

Because the plumes were seen in Triton’s southern hemisphere during its spring, they were assumed to be created as sunlight penetrated a thin layer of nitrogen ice deposited from Triton’s tenuous atmosphere during its 40-year winter. That sunlight, it was presumed, warmed underlying materials enough to heat the nearby nitrogen ice. This produced nitrogen gas, which found its way to cracks in the surface where it blasted out, carrying dust with it.

It was a reasonable hypothesis, especially because similar gas jets have been seen on Mars, when spring sunlight does exactly that with wintertime deposits of carbon dioxide ice.

But it’s possible that this simple hypothesis needs to be rethought, says Candice Hansen, a planetary scientist from Ivins, Utah, who works with the Planetary Science Institute, based in Tucson, Arizona.

Perhaps, she said last week at the 2018 scientific assembly of the Committee on Space Research (COSPAR) in Pasadena, California, these jets are powered by water vapor escaping from an ocean, many kilometres beneath the surface.

The evidence for an ocean on Triton, she says, begins with a 2007 study that used crater counts to estimate the age of Triton’s surface and came up with a number of less than 10 million years. Not only is that “really young, geologically speaking,” Hansen says, “[but] that means there’s some process that’s been erasing craters.” And the most likely such process is the upwelling of liquids from below — something that can only occur if there are underlying liquids to upwell.

Another study, in 2015, found that tidal heating from Neptune could be strong enough to maintain a subsurface “liquid layer” — i.e., an ocean — that could produce not only the recent resurfacing seen by the 2007 paper, but also the plumes seen by Voyager.

Does that prove that Triton has a subsurface ocean? Of course not, Hansen says. “It’s more the idea that, given what we know now [about other moons], we should go back and reexamine what we thought we knew in the 1990s. And I was around then and wrote one of the papers that said, ‘Yeah, it’s solar driven.’”

Proving that Triton is an ocean world would almost certainly require a return to Neptune, which, like its sister planet Uranus, has not been visited since its the long-ago Voyager flybys.

These planets are interesting not just because their high water content (as much as 65 percent by weight) challenges our understanding of how planets form, but because similar planets are proving to be surprisingly common around other stars.

But in a list of a dozen priorities for an ice giants mission, elaborated by NASA and the European Space Agency in a 2017 collaborative study, fully half of the objectives including studying these planets’ moons.

Nor would this simply be another Voyager-style flyby. “The study investigated many mission architectures and finds that achieving these objectives would require a well-instrumented orbiter making multiple flybys of each major satellite,” Hofstadter says.

And, he adds, “Uranus and Neptune are equally compelling science targets. Each planet has things to teach us which that the other cannot, so ultimately both systems must be explored.”

But it won’t occur soon. The optimum launch window for a Uranus mission, using a Jupiter gravity assist, is 2030 to 2034, the NASA/ESA report says. For Neptune, it’s 2029-2030. Transit time would be 11 to 13 years. If so, no future mission will get there until more than 50 years after Voyager gave us our last – and to date only – close-ups.

Will this happen in our lifetimes? “I hope so!” Hansen says.

Originally published by Cosmos as Is Triton an ocean world?