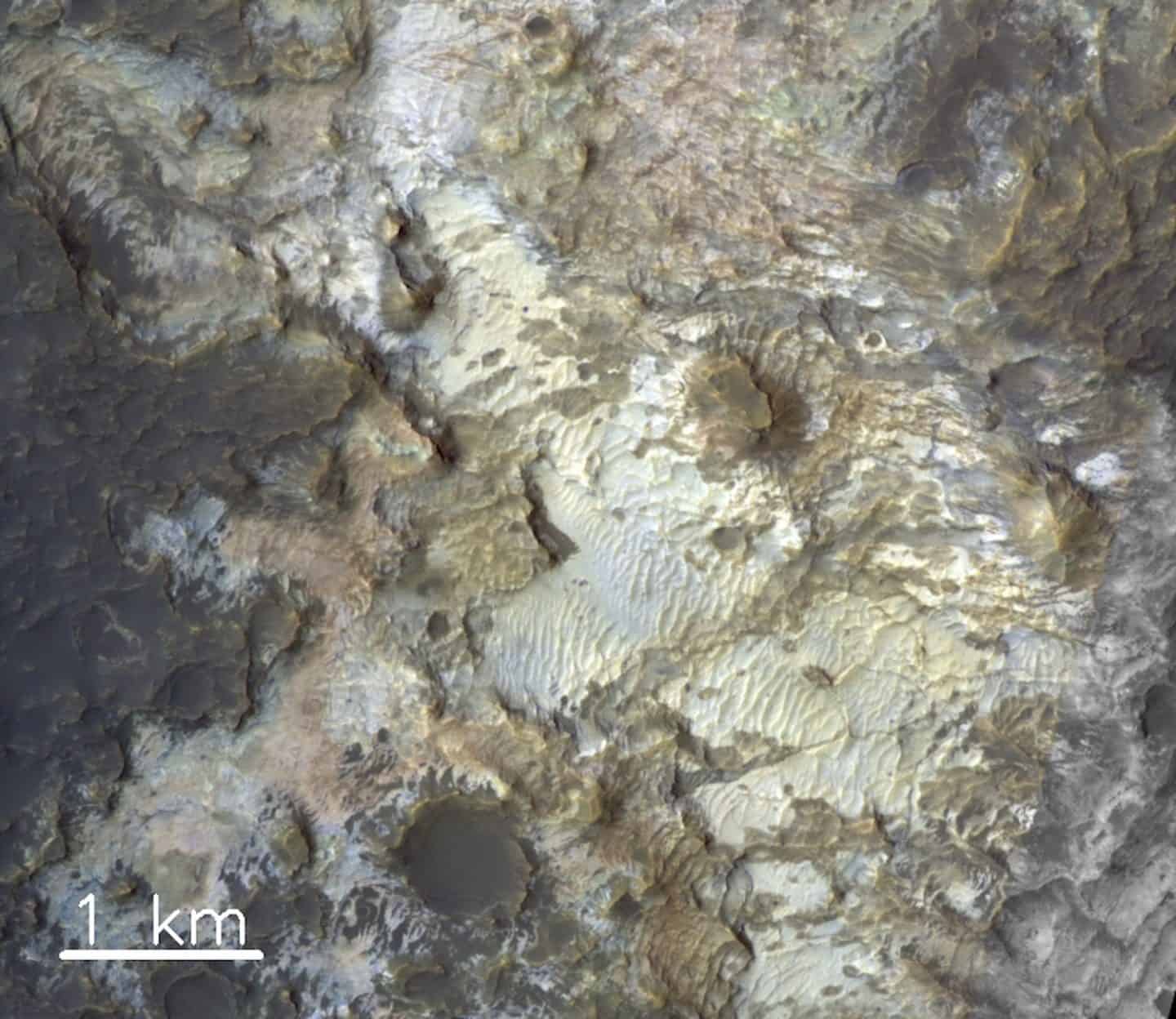 The interior of the Kibuye crater on Mars, seen from above. Credit: ESA/Roscosmos/CaSSIS
More on:
Mars

Rich and varied, the floor of the Kibuye crater on Mars, in the region of Terra Sirenum, looks like an astro-geologist’s dream. Infrared spectrometers on board orbiting surveillance craft have already identified chloride salt and clay minerals, but the naked eye strongly suggests there are many more rocky delights to be discovered – like this Martian crater.

This image taken by the CaSSIS camera on board the ExoMars Trace Gas Orbiter spacecraft, a joint venture between the European Space Agency and its Russian equivalent, Roscosmos. The camera was developed by researchers at the University of Bern in Switzerland.

The mission launched in 2016 with the aim of detecting gases, such as methane, in the planet’s atmosphere that might indicate the presence of life.

Meanwhile, NASA’s Mars Reconnaissance Orbiter has captured this close-up image (above) of a relatively recent impact crater in the Sirenum Fossae region of Mars. The sharp rim and well-preserved ejecta suggest that, in geological terms it is quite fresh.

The crater, a little more than a kilometre wide, photographed by the orbiter’s High Resolution Imaging Science Experiment (HiRISE) camera.

And in another case, the orbiter’s Compact Reconnaissance Imaging Spectrometer for Mars (CRISM) has taken this image of deposits of impact glass preserved in Martian craters, including Alga Crater, shown above.

The glass was detected by researchers at Brown University.

In colour-coding based on analysis of CRISM spectra, green indicates the presence of glass. (Blues are pyroxene; reds are olivine.)

Impact glass forms in the heat of a violent impact that excavates a crater. Impact glass found on Earth can preserve evidence about ancient life.

This view shows Alga Crater’s central peak, which is about 5 kilometres wide within the 19 kilometre diameter of this southern-hemisphere crater.

Originally published by Cosmos as Inside a Martian crater