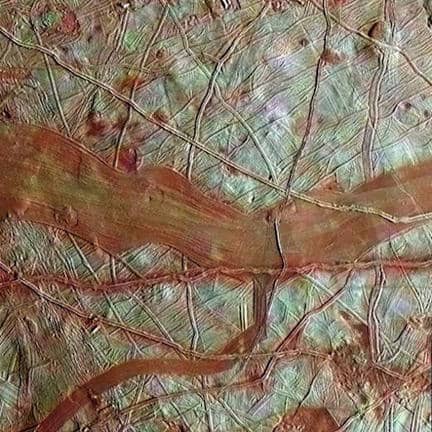 Constant gravitational pressures on the icy surface of Jupiter’s moon Europa generate much more heat than previously thought, which may force a rethink about the chemistry of the liquid water ocean below the surface.

Scientists at Brown and Columbia universities were encouraged to investigate the phenomenon because of what was happening to the surface of the moon.

“There was clearly some sort of tectonic activity – things moving around and cracking,” says Columbia’s Christine McCarthy, who led the new research as a graduate student at Brown.

“There were also places on Europa that look like melt-through or mushy ice.”

The only way to create enough heat to have this effect apart from exposure to the Sun was by the tidal compression caused by Jupiter’s huge gravitational field.

It was already understood that tidal pressures as the moon orbits Jupiter gently heats Europa from the core to keep the ocean in a liquid state.

And scientists knew the icy plates on the surface generated heat through frictional processes at the boundaries.

McCarthy explained the effect as similar to how metal heats up when it is repeatedly bent.

“If you bend it back and forth, you can feel it making heat at the junction,” she told a Brown University news reporter.

“The way it does that is that internal defects within that metal are rubbing past each other, and it’s a similar process to how energy would be dissipated in ice.”

But the new experiments show the heating in the ice goes further than that. When McCarthy and her colleagues subjected ice samples to cyclical loads similar to those acting on Europa’s surface, they found that heating at the boundaries where grains of ice meet were not the primary heat-generators in the process.

The researchers believe the heat actually comes from defects that form in the ice’s crystalline lattice as a result of deformation caused by the gravitational pull.

The scientists say that their discovery should help build models that better explain what is happening in Europa’s hidden ocean.

“This provides modellers with a new physics to apply,” McCarthy said.