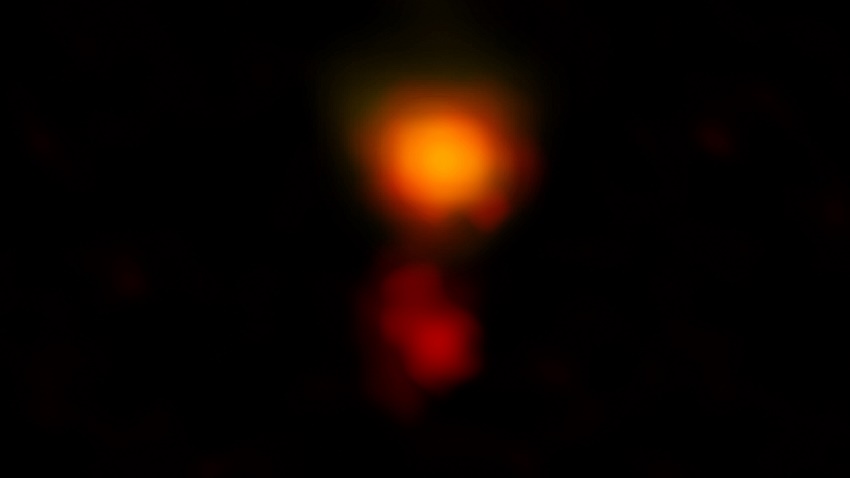 Astronomers using the Atacama Large Millimetre/submillimetre Array (ALMA) have spotted the light of a massive galaxy seen only 970 million years after the Big Bang.

Called MAMBO-9, it is, they say, the most distant dusty star-forming galaxy ever observed without the help of a gravitational lens.

Its light was first detected 10 years ago by Manuel Aravena, a member of the current team, using the Max-Planck Millimeter Bolometer (MAMBO) instrument on the IRAM 30-metre telescope in Spain and the Plateau de Bure Interferometer in France.

However, these observations were not sensitive enough to reveal the distance of the galaxy.

“We were in doubt if it was real because we couldn’t find it with other telescopes. But if it was real, it had to be very far away,” says Aravena, who is now at Universidad Diego Portales in Chile.

ALMA’s sensitivity allowed them to confirm just how far away. Its light travelled about 13 billion years to reach ALMA’s antennas.

“We found the galaxy in a new ALMA survey specifically designed to identify dusty star-forming galaxies in the early universe,” says Caitlin Casey of the University of Texas, US, the lead author a paper published in The Astrophysical Journal.

“And what is special about this observation, is that this is the most distant dusty galaxy we have ever seen in an unobstructed way.”

They saw MAMBO-9 directly, without a lens, and this allowed them to measure its mass. “The total mass of gas and dust in the galaxy is enormous: 10 times more than all the stars in the Milky Way,” Casey says. “This means that it has yet to build most of its stars.”

The galaxy consists of two parts, and it is in the process of merging.