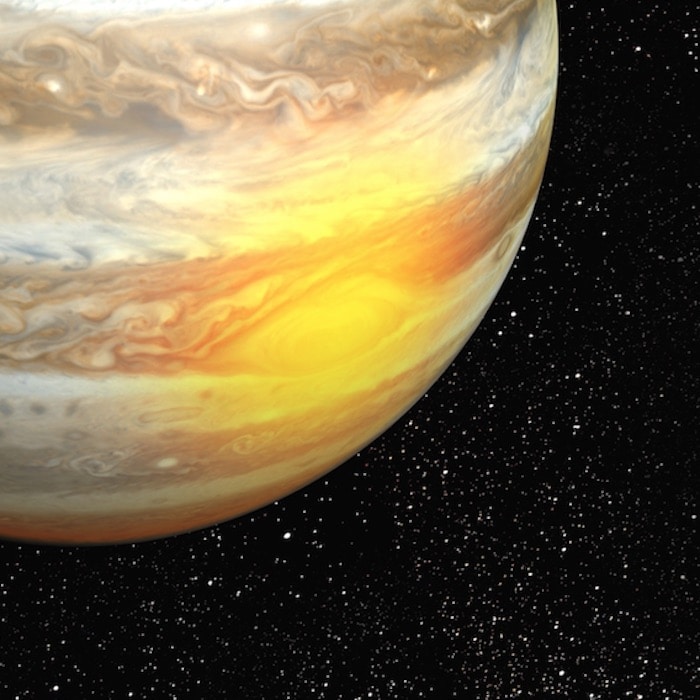 Researchers from the US and UK noticed the patch of atmosphere above the massive hurricane was hundreds of degrees warmer than its surrounds. They think gravity waves clashing with sound waves, produced as the storm rubs on its surrounds, helps warm the upper atmosphere of the entire planet.

Jupiter – like the other gas giants in our solar system – sits far from the sun, its surface only getting a paltry 4% of the solar radiation we receive. Yet, in 1972, American planetary scientists noticed its upper atmosphere – around 800 kilometres above the cloud tops – was surprisingly warm.

Some heat is generated at the poles. Particles crashing through the atmosphere, inducing southern and northern lights, also heat it to temperatures more than 1,000 °C.

But Jupiter’s hefty Coriolis force – produced as the planet spins once each 10 hours – keeps those patches of warmth hemmed in.

Equatorial regions are around 600 °C warmer than can be explained by the sun. If that heat is not a result of solar – or polar – heating, where is it coming from?

This “energy crisis” has had planetary scientists stumped. So James O’Donoghue and Luke Moore from Boston University and Tom Stallard and Henrik Melin from the University of Leicester determined to get to the bottom of the mystery.

They observed the planet for nine consecutive hours – the best part of a Jovian day – in December 2012 with the NASA Infrared Telescope Facility in Hawaii.

The SpeX spectrometer instrument at the facility created a heat map of the planet by detecting vibrations of H3+, an ion found in the upper atmosphere. Faster vibrations translates to more heat.

They saw the expected hot polar regions – but also saw a hot patch more than 1,300 °C directly above the Great Red Spot, a storm three times the width of Earth that’s raged on Jupiter at least 300 years: “a weird coincidence or a major clue?” O’Donoghue asks.

He and his colleagues decided the Great Red Spot had to be their “smoking gun”. The likely energy source, they suggest, is a combination of gravity waves and sound waves produced by the hurricane that clash in the upper atmosphere.

Gravity waves arise when a layer, such as water, is disturbed and gravity tries to equalise it. Tilt a glass of water and gravity will slosh the liquid back and forth until it’s back in equilibrium. The same happens in layers of an atmosphere.

Sound waves perpetuate when molecules smash into each other. As they collide they shrug off a little heat energy. This happens on Earth – the atmosphere above the Andes in South America, for instance, is warmed thanks to fluctuating wind gusts coursing over and around the mountains.

Modelling shows that on their own, gravity waves and sound waves could contribute 1 °C and 10 °C of heating to Jupiter’s upper atmosphere per day respectively. Together, this may be multiplied.

The team also noticed the equatorial side of the Great Red Spot was warmer. This may be because those winds travel with a faster relative velocity to their surrounds than the polar side of the storm, creating more turbulence and sound waves and therefore, more heat.

The work can be applied to other gas giants. Uranus, Saturn and Neptune are all warmer than they should be, they’re even further from the sun than Jupiter.