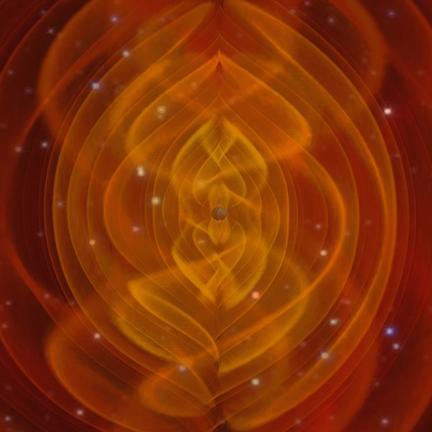 What are gravitational waves?

In essence, they’re vibrations produced when mass from cataclysmic cosmological explosions and collisions, such as merging black holes, is converted to energy.

Such mega blasts are powerful enough to wobble the fabric of space-time, sending out gravitational waves like ripples on a pond.

But gravitational waves don’t make galaxies or planets or you or I bob up and down, as you would expect a floating leaf – rather, they stretch and compress matter.

If they’re so energetic and plentiful, why haven’t we found them yet?

The amount of stretch or compression has simply been too small for our detectors to pick up.

Every time a gravitational wave passes through our body, we stretch or squish by less than a proton’s diameter.

Like pond ripples, gravitational waves get weaker the further they travel – and the collisions that produce them can be billions of light-years away.

Are they the same as gravity waves?

No. It’s easy to get the two confused, especially as, according to general relativity, gravity is linked to the curvature of space-time.

But gravity waves are fluid dynamics phenomena. They arise when gravity tries to equalise waves propogating between layers of different density, such as layers of the atmosphere, or between water and air.

Got it. So what’s Albert Einstein’s involvement in gravitational waves?

He predicted their existence in his theory of general relativity a hundred years ago.

Just about everything else in his theory has been confirmed in the century since he published it. But gravitational waves remain stubbornly elusive. In fact, even Einstein was doubtful we’d ever directly detect them.

This sounds familiar. Didn’t we find them in 2014?

There was a period where a telescope in the South Pole seemed to have picked up gravitational waves left over from the Big Bang … and they turned out to be dust from our own galaxy.

But gravitational waves have been detected indirectly – way back in 1974.

American physicists Russell Hulse and Joseph Taylor found two pulsars spinning towards each other, and calculated that if they were emitting gravitational waves, they fit perfectly with general relativity. It scored them the 1993 physics Nobel, too.

So how are we trying to detect them today?

Our best bet is with the largest detector – the Laser Inferometer Gravitational-wave Observatory, or LIGO – which has been operating since 2002, and recently underwent a five-year, $200 million refurb.

Two L-shaped detectors, 3,000 kilometres apart in the US, bounce lasers along their four-kilometre arms. The lasers intersect, in sync, at the corner of the L and cancel each other out.

But should a large-enough gravitational wave roll through, and one of the arms stretch or compress even by one 10,000th the size of a proton, the lasers will be ever-so-slightly out of sync and bam! A signal will be produced. And if both detectors pick up the same out-of-sync signal 10 milliseconds apart, there’s evidence of a gravitational wave.

Any others in the mix?

Of course. The VIRGO detector with three-kilometre arms is in Italy and the Indian Initiative in Gravitational-wave Observations, or INDIGO, is short-listing sites.

Last year, the European Space Agency launched the Laser Interferometer Space Antenna (LISA) Pathfinder to see if it’s possible to stick a trio of satellites into Earth orbit, which will ping lasers back and forth like the LIGO arms.

Sounds complicated. Can we use the gravitational waves for anything?

Pinpointing exactly where a gravitational wave has originated will become possible as more detectors get up and running. Telescopes can then swing to focus on those areas.

If the explosion is invisible to electromagnetic radiation – which is what our telescopes today use – waves of “gravitational radiation” may tell us something about their origins.

And the biggest explosion of all – the Big Bang – is the ultimate prize. The oldest light in the Universe, the cosmic background radiation, emerged 300,000 years after the Big Bang.

Related story:
How does LIGO look for gravitational waves?

Further reading:
Einstein’s gravitational waves remain elusive
Star dust and gravitational waves
Ripples in the fabric of space-time
General Relativity – still ahead of its time
New model of the cosmos: a Universe that begins again

Originally published by Cosmos as Gravitational waves – your questions answered