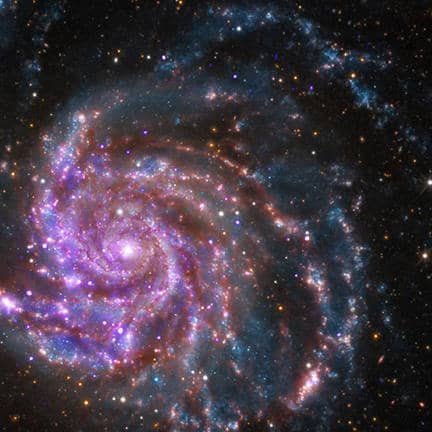 This panoramic view combines a new image of the field around the Wolf–Rayet star WR 22 in the Carina Nebula (right) with an earlier picture of the region around the unique star Eta Carinae in the heart of the nebula (left).

A reproduction of a composite colour image of the Horsehead Nebula and its immediate surroundings. It is based on three exposures in the visual part of the spectrum with the FORS2 multi-mode instrument at the 8.2-m KUEYEN telescope at Paranal, Chile.

Thor’s Helmet Nebula, image taken on the European Southern Observatory’s 50th Anniversary, 5 October 2012. This object, also known as NGC 2359, lies in the constellation of Canis Major (The Great Dog). The helmet-shaped nebula is around 15,000 light-years away from Earth and is more than 30 light-years across. The helmet is a cosmic bubble, blown as the wind from the bright, massive star near the bubble’s centre sweeps through the surrounding molecular cloud.

This spectacular image of the large spiral galaxy NGC 1232 was obtained on 21 September 1998, during a period of good observing conditions. NGC 1232 is located 20º south of the celestial equator, in the constellation Eridanus (The River).

The centre of the Milky Way is a crowded neighbourhood and not always a calm one, as seen in this image from NASA’s Chandra X-ray Observatory.

This majestic view, taken by NASA’s Spitzer Space Telescope, tells an untold story of life and death in the Eagle Nebula, an industrious star-making factory located 7,000 light-years away in the Serpens Constellation.

This well-known spiral galaxy, Messier 83, is located in the southern constellation Hydra (The Water-Snake) and is also known as NGC 5236; the distance is about 15 million light-years. The spiral structure resembles that of the Milky Way Galaxy in which we live, but Messier 83 also possesses a bar-like structure at the centre.

A Very Large Telescope (VLT) image of the Antennae Galaxies gives us what may be the second-best visible-light view yet of this striking pair of colliding galaxies with dramatically distorted shapes.

Resembling a nightmarish beast rearing its head from a crimson sea, this monstrous object is actually a pillar of gas and dust. Called the Cone Nebula because of its conical shape in ground-based images, this giant pillar resides in a turbulent star-forming region.

This image of the chaotic spiral galaxy NGC 7793 was observed with the FORS instrument attached to ESO’s Very Large Telescope at Paranal, Chile.

This image of the Pinwheel Galaxy, or M101, combines data in the infrared, visible and X-rays from four of NASA's space telescopes.