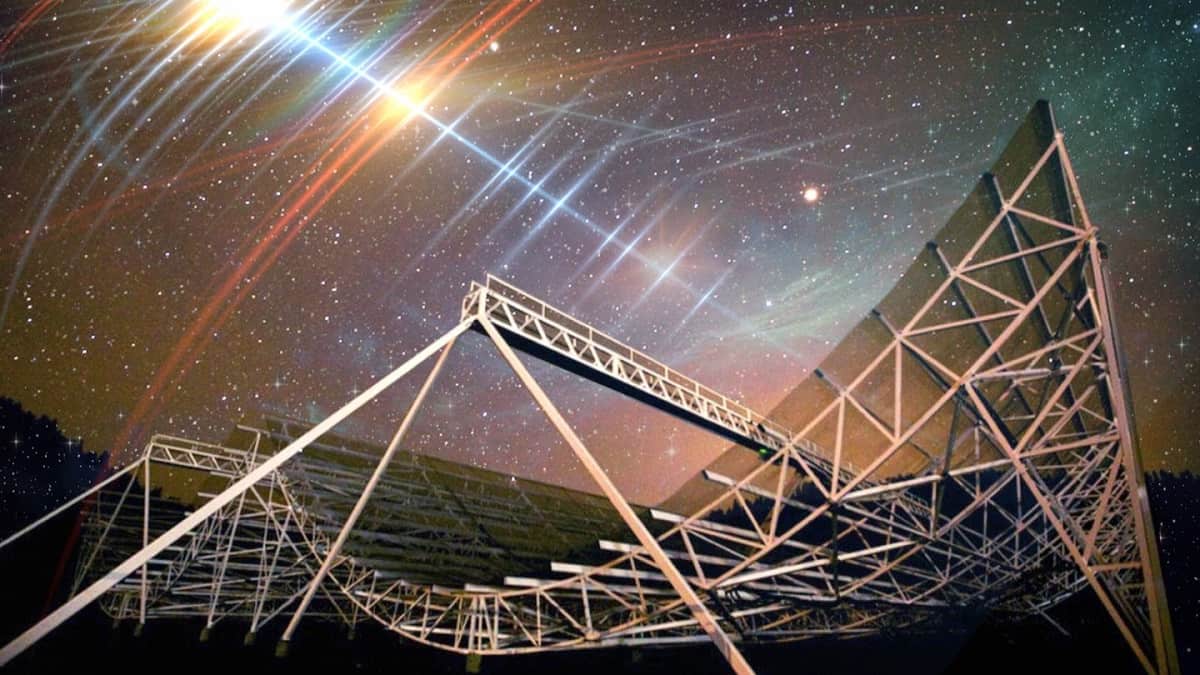 The large radio telescope CHIME that picked up the FRB. Credit: CHIME, with background edited by MIT News.
More on:
radio telescope

Astronomers have detected a new fast radio burst, or FRB, from a galaxy far, far away. The new FRB is currently the longest lasting with the clearest periodic pattern ever observed.

FRBs are strong pulses of electromagnetic radiation in the radio-frequency end of the spectrum. The first FRB, known as the “Lorimer burst”, was detected in 2007, but their exact astrophysical origins still remain mysteries.

Typically, fast radio bursts last a few milliseconds at most, and either go quiet or, very rarely, repeat somewhat periodically. This new signal, however, is about three seconds long – about a thousand times longer than the average FRB – and contains a clear periodic pattern similar to a heartbeat which repeats every 0.2 seconds.

Labelled FRB 20191221A, the burst’s source is in a galaxy several billion lightyears from Earth and is theorised to be a neutron star like a radio pulsar or magnetar. The finding is described in a paper published in Nature.

“There are not many things in the universe that emit strictly periodic signals,” says co-author Daniele Michilli, a postdoc in MIT’s Kavli Institute for Astrophysics and Space Research, US. “Examples that we know of in our own galaxy are radio pulsars and magnetars, which rotate and produce a beamed emission similar to a lighthouse. And we think this new signal could be a magnetar or pulsar on steroids.”

FRBs have been detected across the universe. One instrument that has recently been finding radio bursts is the interferometric radio telescope Canadian Hydrogen Intensity Mapping Experiment, or CHIME.

As Earth rotates, CHIME – which began observations in 2018 – has picked up radio waves emitted by hydrogen in the early universe as well as hundreds of FRBs.

Most of the bursts CHIME has found are fleeting and random in their construction. But, like a stethoscope on the universe’s rib cage, on December 21, 2019 CHIME found a cosmic pulse.

“It was unusual,” Michilli says. “Not only was it very long, lasting about three seconds, but there were periodic peaks that were remarkably precise, emitting every fraction of a second – boom, boom, boom – like a heartbeat. This is the first time the FRB signal itself is periodic.”

The team analysed the signal and found similarities with pulsars and magnetars in our own galaxy – only the pulses from FRB 20191221A are more than a million times brighter. The researchers believe this means that the FRB may have come from a neutron star which is normally much less bright, but for some unknown reason ejected a series of magnificent bursts. And CHIME was in the right place at the right time to see it.

“CHIME has now detected many FRBs with different properties,” Michilli says. “We’ve seen some that live inside clouds that are very turbulent, while others look like they’re in clean environments. From the properties of this new signal, we can say that around this source, there’s a cloud of plasma that must be extremely turbulent.”

If more bursts from FRB 201912221A can be seen in the future, it may help the researchers understand the source of the burst as well as neutron stars in general.

“This detection raises the question of what could cause this extreme signal that we’ve never seen before, and how can we use this signal to study the universe,” Michilli adds. “Future telescopes promise to discover thousands of FRBs a month, and at that point we may find many more of these periodic signals.” The team also hopes more periodic signals from the same source could be used as an astrophysical clock. The frequency of the bursts, and how they change as the source moves away from Earth, might even be used to measure the rate at which the universe is expanding.