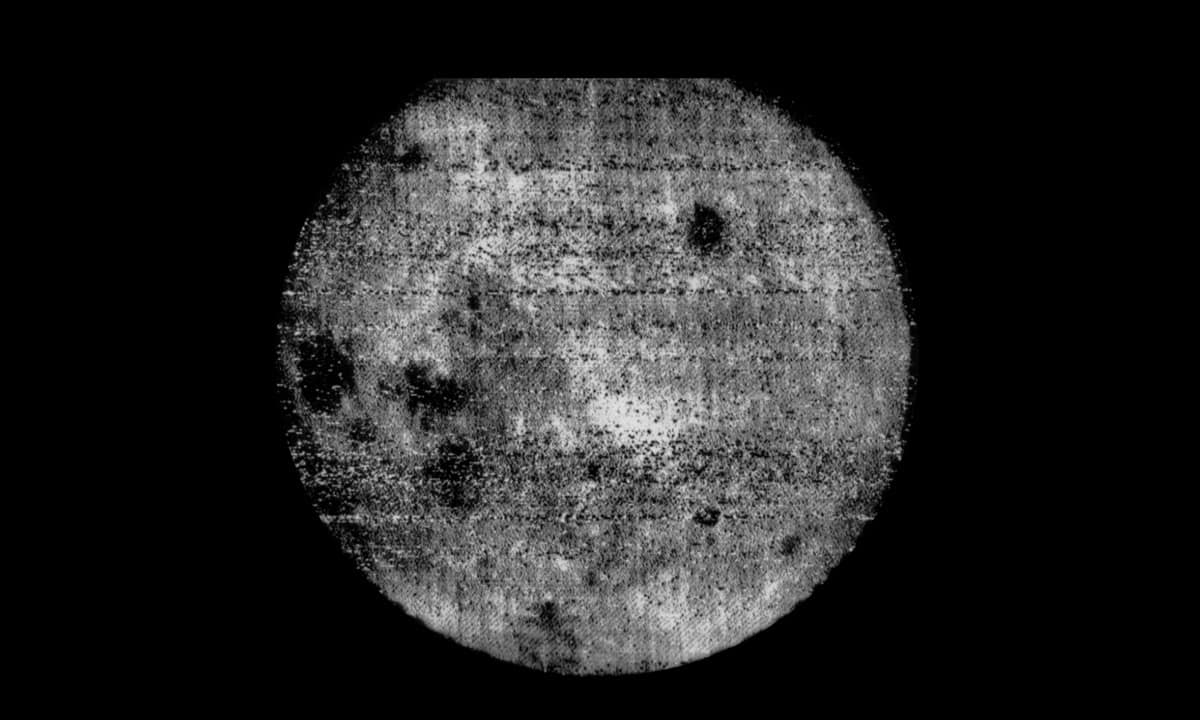 This image represents the first time in history that we saw something that can’t be seen from Earth: the far side of the Moon. It was taken 58 years ago, on 7 October, 1959, by the Soviet Union’s Luna 3 spacecraft.

For as long as humans have been able to appreciate the night sky, we have looked up at a more-or-less unchanging moonface. That’s because the Moon is locked in what is known as synchronous rotation: it orbits the Earth once every 27.322 days, and revolves on its axis at almost the exact same speed. It wasn’t always this way, but the gravitational effect of the Earth’s tidal forces has slowed the rotation over time. The effect is called ‘tidal locking’ or ‘captured rotation’.

All that changed when Luna 3 flew around the Moon’s far side. With its fly-by timed to ensure the hidden hemisphere was facing the Sun, it passed within 64,000 kilometres of the surface and snapped 29 images with a photo-television camera over 40 minutes. Of those images, 15 (or 17, accounts vary) were successfully transmitted back to Earth.

It took 11 days before the images got back to Earth. Their transmission is a technological saga as compelling as the mechanics of getting the spacecraft into the position to take them in the first place – which included the very first use of gravity-assist manoeuvres to slingshot the spacecraft around the Moon and back towards Earth.

By the standards of today’s digital photography, taking and sending images was mind-bogglingly complex.

First, the Luna 3 took photographs by exposing 35-millimetre film. This was developed in an automated miniature darkroom using the standard chemical-bath-and-dry method. Then the film was projected onto a light-sensitive vacuum tube known as a photomultiplier, which converted the black-and-white pixels line-by-line into radio-transmittable data – a “fax over radio”.

The success of this part of the process required the spacecraft being close enough to Earth to send a clear signal. Hence the time delay. Transmitting each image took about 30 minutes.

The following image shows a comparison of the Luna 3 images to those taken 50 years later by NASA’s Lunar Reconnaissance Orbiter (LRO), in June 2009.

Through the quality of the Luna 3 images was poor, they provided the means to create the very first atlas of the Moon’s far side. Published by USSR Academy of Sciences the following year, the atlas catalogued 500 distinguishable geographic features. Others followed.

The most striking aspect shown by the images is that the surface of the Moon’s far side is largely devoid of the large, dark patches of the near side. These features – called ‘maria’, the plural form of ‘mare’, which is Latin for sea – are basaltic plains formed by ancient volcanic eruptions. They play a crucial role in enabling humans to imagine they see in the Moon the image of a man, or rabbit, or a tree (if you’re Hawaiian), or hands (if you’re Indian).

Why there are these marked differences between Moon’s seen and unseen hemispheres is known as the Lunar Farside Highlands Problem. It remains a matter of speculation.

But at the very least, thanks to the Luna 3 mission we now know one thing with certainty: we’re not missing out on a better view.

Originally published by Cosmos as Far side of the moon revealed, half a century ago