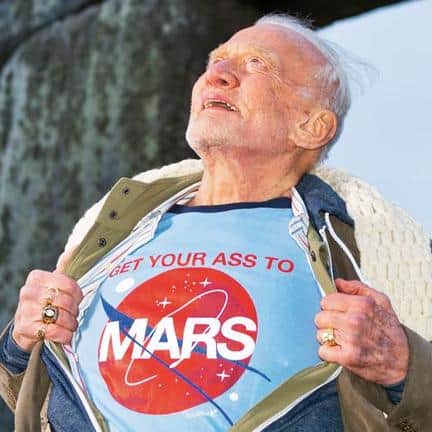 Astronaut and author Buzz Aldrin had hardly settled back on Earth in 1969 when he was advocating expanding the space program to put humans on Mars. In the years since, more voices have joined the chorus.

Despite a generation of setbacks, Aldrin has stuck to his guns. His 2013 book Mission to Mars outlines his vision, and this year he published Welcome to Mars, a children’s book that sells his plan to the generation who will engineer and deploy the necessary technologies.

Aldrin has a lot of supporters, and not all of them are kids. A new generation of billionaires are not shy about parlaying their incredible wealth into passion projects. Elon Musk and Richard Branson have become synonymous with such ambitions, but a Dutch entrepreneur seems to have the most advanced plan.

Bas Lansdorp is the CEO of Mars One, a company that intends to fly colonists to Mars by 2025 and to pay for the adventure by chronicling their efforts on a reality TV show.

The financing model has already proved fickle. Endemol – producer of the Big Brother series and Mars One’s media partner – has backed out. Mars One also planned to use SpaceX vehicles for the mission, but in February this year, the Guardian website reported that Mars One had less than $1 million in the bank.

Even if Mars One reaches its $6 billion target, experts say it won’t be enough – NASA prices a return trip to Mars at $100 billion.

Researchers have also pulled Mars One’s plan apart from technical and engineering perspectives, and even a former candidate has spoken out against it. Former NASA researcher Joseph Roche said candidates advance through the selection process by amassing points. It seemed harmless enough until he revealed points were accrued by buying Mars One merchandise or donating to the project.

Meanwhile, Aldrin’s enthusiasm for Mars remains undimmed. As he told AOL.com: “Since the Apollo 11 landing in July 1969, I have had a long-held belief that Earth isn’t the only world for us any more. In my view, we must all strive for a continuously expanding human presence in space.”

He recently signed an agreement with the Florida Institute of Technology to establish The Buzz Aldrin Space Institute, a think tank that will sketch out a viable Mars mission blueprint in the hope of influencing NASA’s plans.

Aldrin’s idea is to build up a series of spaceship networks on the Earth, the Moon and Mars. Instead of shooting a rocket full of people straight to Mars we’d stop off at the Moon, catch some asteroids for materials, build a staging area on the Martian moon Phobos and then complete the journey.

Despite his idealism, Aldrin is a political realist. He suggests Obama could lay the groundwork for space exploration and that the next president could continue it, in the same way that Kennedy’s vision to land humans on the Moon was completed by LBJ.

Aldrin also believes that the initial trip to Mars will be a one-way ride. “It will cost the world – and the US –  billions and billions of dollars to put these people there, and you’re going to bring them back?” he asked an MIT conference in 2014. “What are you going to do when you bring them back here that can possibly compare to the value they would be if they stayed there and Mars wasn’t empty? And then, they helped to work with the next group and it builds up a cadre of people. When we’ve got 100 – or whatever it is – then we start bringing people back.”

Aldrin recently appeared on the CBS news show Face the Nation accompanied by former US House Speaker Newt Gingrich, who has his own space colonisation ambitions. Gingrich pointed out that Kennedy created a new bureaucracy to go to the Moon. “If we put that same amount of money in today and built a brand new mission to Mars bureaucracy aimed only on that assignment, you’d get there very fast,” he said.

Aldrin envisages the Mars mission could be shared by America with other space-faring nations such as China, South Korea or India.

We already have a pretty successful (fictional) model of how to colonise Mars – Kim Stanley Robinson’s trilogy Red Mars (1993), Green Mars (1994) and Blue Mars (1996). Scientists have praised the scientific authenticity of the novels, and Robinson believes they still hold up. “Mars should be thought of like Antarctica or a Moon base with a base staffed by rotating crews of scientists and support people who visit, work and return home,” he says. “That arrangement may last for a long time while we study the effects of living there – we have no idea what living long-term in 38% of Earth gravity will do to people.”

Unfortunately, that’s one of the many things we don’t know about Mars. A 2014 study at MIT claimed humans who reached Mars would be dead within about two and a half months.

“It will cost the world billons and billions of dollars to put those people there, and you’re going to bring them back?”

Even though the Mars trilogy is still a good benchmark, we’ve discovered a lot in the years since it was written. Robinson didn’t account for the levels of percholates (salts poisonous to humans) in the Martian soil. There’s not as much nitrogen as he thought (probably enough for agriculture, but not for the bulk neutral gas we need for an artificial atmosphere). They’ve also found brain damage in mice exposed to cosmic rays.

Astronaut Chris Hadfield has also come out against Mars. He thinks the Mars One approach of selecting a specific number of astronauts and then designing the technology around them is putting the cart before the horse.

He also suspects we’re over-reaching. “We absolutely need to do it on the Moon for a few generations,” he told Business Insider Australia last year. “On average, the Moon is about 600 times closer to Earth than Mars. That means if something goes wrong with a colony, we can dispatch help from Earth that will reach the Moon in a matter of hours instead of months. Developing a working Moon colony would be an important first step to living on Mars.”

What kind of things might go wrong, we can scarcely imagine. Carl Sagan observed that “precisely because Mars is an environment of great potential biological interest, it is possible that on Mars there are pathogens, organisms which, if transported to the terrestrial environment, might do enormous biological damage – a Martian plague, the twist in the plot of H. G. Wells’ War of the Worlds, but in reverse. This is an extremely grave point.”

The success of the Curiosity rover Mars landing in August 2012 captured the world’s imagination, but NASA’s Mars Polar Lander and Mars Climate Orbiter were both lost in the late ’90s, and up to 19 Russian efforts have either failed altogether or not achieved their full mission objectives. Our success at reaching Mars stand at well below 50%.

But Mars is close enough that every two years or so we can reach it in eight months. That doesn’t mean it is the best destination in the Solar System. There’s evidence Europa (a moon of Jupiter) or Enceladus (a moon of Saturn) might offer far more resources and better odds of survival for us.

Kim Stanley Robinson agrees Mars might have become a symbol of exploration no matter how scientifically feasible it is. “There are people who really want all this to become fact, it’s like a religion for them,” he says, “and as with religion, they tend to ignore new findings that threaten their belief system.”

Originally published by Cosmos as The Buzz about Mars