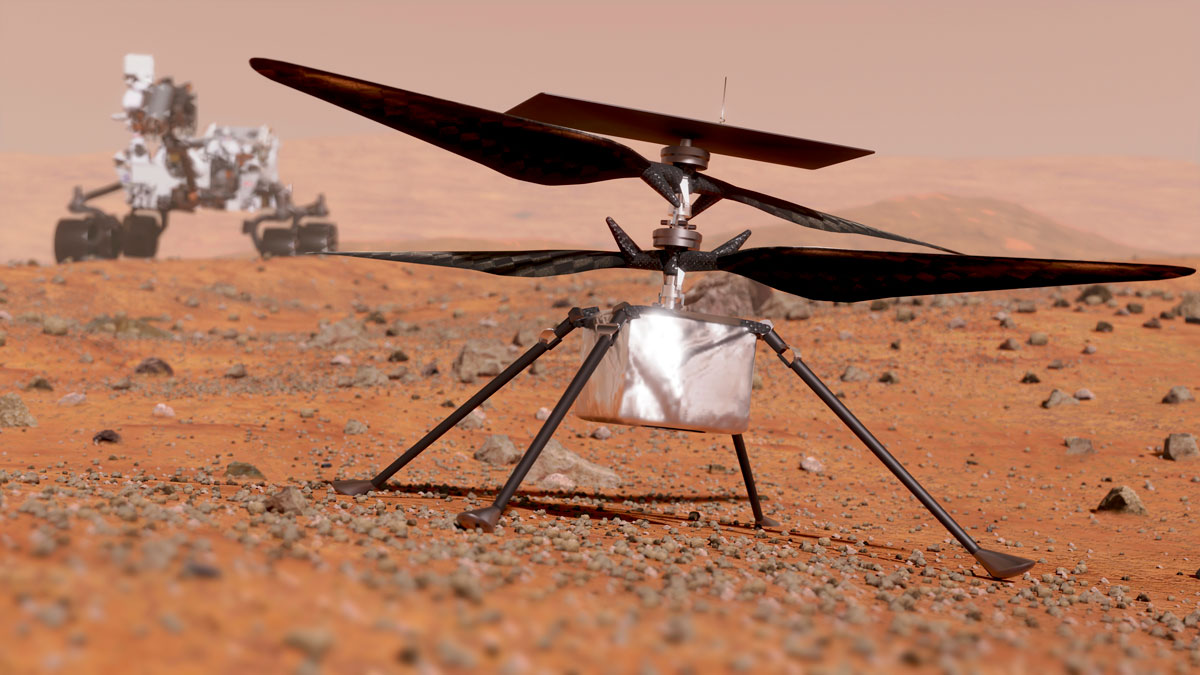 A year and 20-plus flights into what was supposed to be a one-month mission, NASA’s Ingenuity helicopter is not only still going strong, but has evolved into a valuable companion for the Perseverance Mars rover.

The 1.8-kilogram helicopter was designed as a technology demonstration – simply to find out if it is indeed possible to fly on Mars. But when Perseverance set off on the first phase of its mission – a one-year-exploration of the rocks forming the floor of its landing site in Jezero Crater, scientists and engineers scrambled to find ways to make the helicopter useful.

A big part of what was needed, says Matt Golombek, a planetary geologist at NASA’s Jet Propulsion Laboratory (JPL), in California, was to find a way to increase the helicopter’s range – not by somehow beefing up its battery; that’s clearly impossible – but by increasing how far it could safely advance in any given flight.

In its initial tests, the helicopter would fly out from one landing site to scout for possible new places to land, then return to its original site and wait for the flight team to examine the images it collected to decide where it could safely land. It would then hop to the new landing site and prepare to start the process anew.

It was a very safe process, but it was also cumbersome. “We quickly figured out that if we had to scout out every site before we landed, we would dramatically restrict operations,” Golombek said last week at the 2022 Lunar and Planetary Science Conference in The Woodlands, Texas. In fact, there were concerns that the helicopter would eventually get outrun by the rover and have to be abandoned.

What was needed was a way to find safe landing zones from space, so the helicopter could go directly from one to another without flying back and forth. Eliminating the need to do that would also double the distance it could go – an important factor because its maximum flying time between battery recharges is a little less than three minutes.

Doing that from space was tricky, however, because the tiniest rocks that could be spotted in high-resolution satellite images were 25 centimetres across, and for the tiny helicopter, a 25cm rock was plenty big enough to be a hazard.

Sussing out safe landing zones from space, however is something Golombek has been doing for a quarter of a century, ever since the Mars Pathfinder landing in 1997. “My day job is selecting landing sites on Mars,” he says, “so I’ve spent most of my career looking for rocks.”

And while spacecraft the size of Pathfinder don’t have to worry about 25cm rocks, one of the things he has learnt is that there is a consistent relationship between the numbers of big and smaller rocks. Basically, he says, if you see big rocks, there will be smaller ones nearby. But if you can’t see any big ones, you don’t have to worry about the smaller ones, either.

To be on the safe side, his team tested this by comparing Ingenuity’s high-resolution images of potential landing zones with the orbital images and what they found was that the 25cm resolution of the orbiting cameras was good enough. If they could see any rock of any size from space, the landing zone wasn’t safe. If they couldn’t, it was acceptable.

Freed to fly farther in any given hop (the record is about 630 metres), Ingenuity has been able not only to keep pace with the rover but to move ahead when needed – allowing it to be useful both to the engineers looking for the best route to follow and the scientists, looking for the best rock formations to study.

Not that this couldn’t have been done without the helicopter – “But the helicopter reconnaissance made it so much more efficient,” says Vivian Sun, a JPL planetary scientist and systems engineer on the Perseverance team.

Meanwhile, the helicopter is in good health, and poised to continue assisting the rover as it moves into the next phase of its mission.