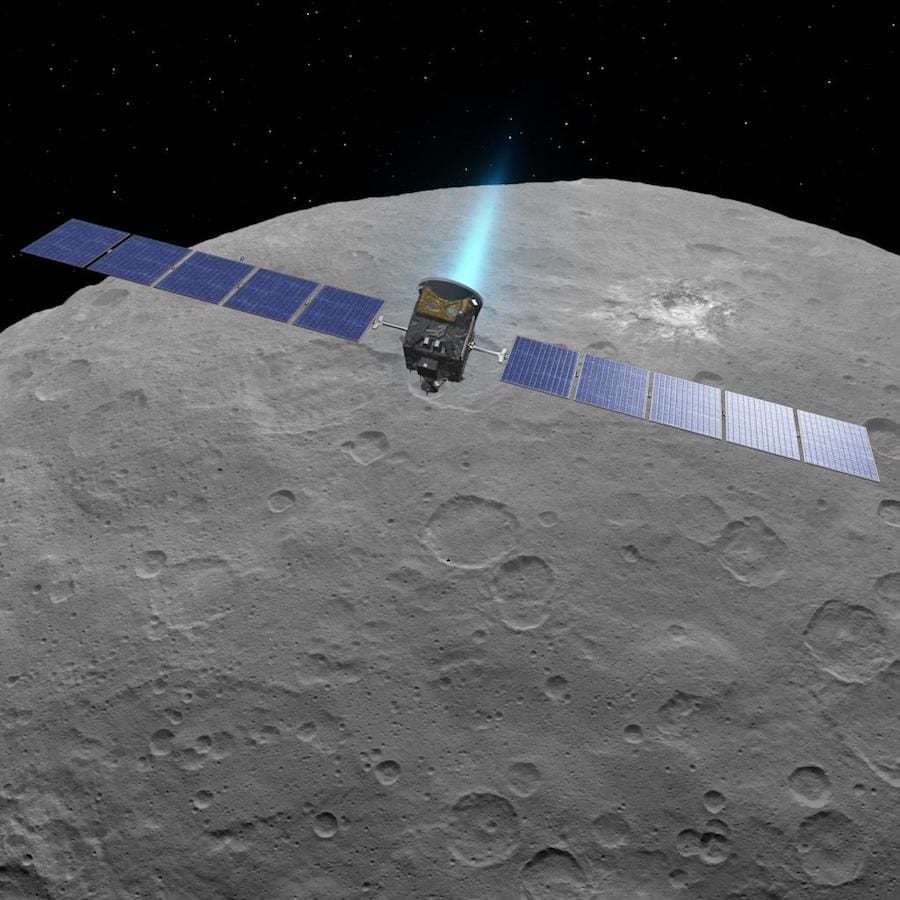 NASA’s Dawn spacecraft has beamed back an abundance of information about dwarf planet Ceres, painting a new picture of the gigantic, pockmarked asteroid made of ice and rock – and sporting an ice volcano.

The papers were published in Science today.

Discovered in 1801, Ceres is the largest object in the asteroid belt that whirls around the sun between Mars and Jupiter. It is thought to be a protoplanet – a mass that was on its way to becoming a planet before the gravitational pull of Jupiter stopped it from accumulating enough mass – and one of the oldest pieces of the solar system, forming within the celestial array’s first five to 15 million years.

Planetary scientists think Ceres contains a layer of water-ice below its dusty outer crust – similar to Jupiter’s moon Europa and Saturn’s moon Enceladus, which are both considered to be potential sources for harbouring life.

Information about the dwarf planet has come from a combination of sources including microwave studies, and analyses of meteorites thought to have originated from another, similar dwarf planet, Vesta.

But the lion’s share comes from the Dawn spacecraft, launched by NASA in 2007 to get a better understanding of Ceres, Vesta and the origins of the solar system.

Now, a deluge of recent Dawn data has been presented in six papers.

While we’ve known for a while that the dwarf planet contains water – we’ve seen water vapour emissions from the surface – exactly what the nature of the water was has been vague.

Theories have long suggested Ceres has a mantle rich in ice – and they’re right.

Jean-Philippe Combe from the Bear Fight Institute in the US and his colleagues describe ice on the surface of the dwarf planet.

The Dawn spacecraft found the mass of ice as it scanned the 10-kilometre-wide, geologically fresh Oxo crater with is visible light and infrared mapping spectrometer.

More water-based revelations on Ceres from the spectrometer were provided by Eleonora Ammannito from the National Institute of Astrophysics in Italy and her colleagues. But rather than water ice, they uncovered a number of phyllosilicate (hydrated, rock-forming) minerals in Ceres’ clay-like crust.

They found magnesium and ammonium bearing minerals all over Ceres’ surface but their abundance varied considerably from place to place.

Ceres’ distinctive outer shell is the product of a combination of ice and rock and shaped by external impacts, cryomagmatism and cryovolcanism. And it looks as though it has the solar system’s first confirmed ice volcano.

Ahuna Mons is largest mountain on Ceres – but Ottaviano Ruesch from NASA’s Goddard Space Flight Centre in the US and his colleagues believe it is an ice volcano (also called a cryovolcano).

Their claim is based on extensive modelling of the formation’s topographic profile.

If correct, it would mark the first evidence of a cryovolcano, although scientists have predicted their existence before as they observed molten ices.

Ruesch and his colleagues claim that features such as Ahuna Mons’ elliptical base and concave top are especially indicative of cryovolcanism because it consists of a brittle outer shell with pressurised, fluid-like material inside.

Buczkowski and her team discovered that while Ceres is covered with a large number of craters, features such as grooves, pit crater chains and troughs are also scattered around.

They argue that many of these features indicate near-surface cryovolcanism.

They also claim that although only one instance of surface ice on Ceres has been detected so far, the presence of these other potentially ice-related features suggests that there is ice in other parts of Ceres’ crust.

Harald Hiesinger from the University of Münster in Germany and his team found something similar when they looked at more images taken by the same camera on the Dawn spacecraft.

According to them, the thermochemical models that had been developed by scientists in the past predicted Ceres should have an icy crust with few or no impact craters.

And although Hiesinger and his colleagues’ observations revealed no large craters, the pictures contradicted predictions, as they showed a varied and heavily cratered surface.

Some impact craters seemed “relaxed” in shape – evidence the ground there was icy – while others were not – indicating something harder such as rock.

They suggest that this, along with the varied features of the dwarf planet’s surface such as polygon-shaped craters, smooth deposits and bright spots suggest that Ceres’ surface is a combination of ice and rock, not one or the other.

Up in the sky

Christopher Russell from the University of California, Los Angeles in the US and his colleagues looked off the little world to its atmosphere.

They peered through the eyes of Dawn’s gamma-ray and neuron detector instrument and mapped charged particles from the sun curving around the dwarf planet. How did this happen?

The most likely explanation was that Ceres’ weak atmosphere was ionised – that is, molecules had electrons stripped away – by particles streaming from the sun. This solar wind was deflected around the dwarf planet.

Their other explanation was that the salty interior generated an electric current, which created a magnetic field which deflected solar particles – in the same way Earth’s magnetic field does.

And this isn’t the last we’ll hear of Dawn. The mission is still active – just today it was moved into a slightly higher orbit to see things from a slightly different angle – and is expected to send back information about the mysterious dwarf planet until 2017 at least.